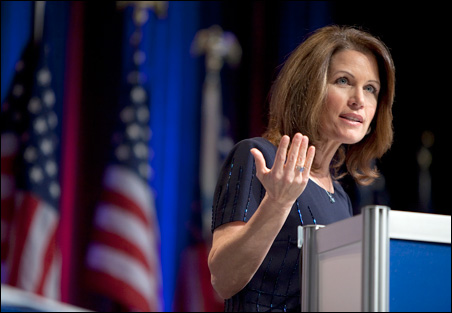 WASHINGTON — I thought for a while about how to present the first quarter’s financial results. The usual way is to list all the info, and while that’s important (and can be found at the end of this story), I figured let’s change it up a bit and see how this goes.

So here are the three big takeaways on the money side that I found from the first quarter’s money race:

1. Michele Bachmann raised a ton of money (no surprise there), but this time it seems to be souring national Democrats because they’d have to spend so much money to effectively target her — money that could be spent to better value elsewhere.

2. Like, say, Minnesota’s 8th District, where a combination of political geography and small cost to run ads is encouraging intervention in the race – to the tune of almost $100,000 already from outside groups. Chip Cravaack’s light haul in the 1st quarter is only fuelling that outside focus.

3. Tim Walz started the year with a balance almost at zero, having spent down almost all of his money battling off a near-miss campaign by Randy Demmer.  His first quarter numbers were solid, not spectacular.

Effectively, if it’s going to be a Walz-Demmer rematch, Walz built a $200,000 lead in just one quarter. And his team will be very happy with that.

2nd — John Kline took in $250,000 to raise his bank balance to $331,000. That’s about 80 percent more than he took in this time last cycle. The reason? Well, a lot of it is that he’s a committee chairman now, and two years ago he hadn’t even been promoted to ranking member yet.

3rd — At this point, it’s now safe to say that Erik Paulsen is Minnesota’s second best fundraiser in the House by a clear margin. The second-term Republican took in $337,000 for the first quarter and has $392,000 cash on hand. Those numbers would look a lot more dominant if he weren’t next door to a certain M. Bachmann, but he’ll take it.

Paulsen’s contribution stats are likely to continue being high so long as he stays on the tax code-writing Ways and Means Committee, which is a financial windfall post.

6th — Michele Bachmann, quite frankly, has a pornographic amount of money. $2.8 million in the bank right now, despite her congressional committee spending more money in the 1st quarter of a non-election year ($787,000) than some campaigns will spend in an entire cycle. However, you can spend three-quarters of a million dollars without killing the bottom line when you raise $1.7 million, I guess.

Two key take-home points from this. First, all of that money is transferrable to a presidential race, if she eventually decides to run. That has been said many times before, but it bears repeating here again.

Second (and something that hasn’t been mentioned much) is that Bachmann’s prolific fundraising is almost certainly having a chilling effect on her potential competition. Consider: Despite the fact that Bachmann has never taken more than 53 percent of the vote in the 6th District, her challenger in 2010, Tarryl Clark, is more frequently mentioned as a challenger to Chip Cravaack in the 8th than Bachmann in the 6th.

Part of what’s driving the focus away from the 6th at a national level is, quite simply, value for money. If you’re a Dem-leaning national fundraising outlet looking to put money into a race, you could put $5 million here and still maybe not unseat Bachmann. Or, you could give $200,000 to 25 other Democrats and watch that become game-changing cash elsewhere. Like, say, in the 8th District.

Of course, more than one Democratic insider noted that she’s running for president. If she commits to that race to the exclusion of a House race, or if she winds up the GOP nominee, then this is an open seat and it’s game on.

8th — Chip Cravaack raised $122,000 in the first quarter, and has $113,000 cash on hand. That’s not a total that will blow anyone out of the water, but in a recent interview Cravaack said he’s only really been fundraising since late February because he’s been more focused on his congressional duties.

If that’s the only reason why his totals were so low, then by simple math, his second quarter results ought to be in the $250,000-$300,000 ballpark. So I guess we’ll wait and see on that. Democrats are planning to target Cravaack aggressively this cycle no matter what — he’s in their top 10 of target races – but no candidate has emerged yet.

This year, the 8th will be a political advertiser’s candy land. The Duluth-Superior market is relatively cheap to advertise in, but it’s always been seen as a bad market (on both sides of the border) because there’s so much bleed-over to the neighboring state. For example, if you’re running for governor of Minnesota and you go up on Duluth TV, a lot of your ad dollars are paying for your ad to be run in Wisconsin, to no benefit for your campaign.

Add to that that the districts were represented by Jim Oberstar and David Obey and, well, almost no one advertised. This year though, in the House, the market covers two swing districts, in MN-08 and WI-07.