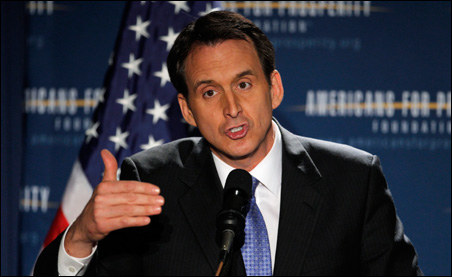 REUTERS/Brian Snyder
Tim Pawlenty speaking at the Americans for Prosperity Foundation’s summit in Manchester on Friday.

MANCHESTER, N.H. – The two Minnesota presidential aspirants were seated at tables right next to each other, at the front of a crowded hall of New Hampshire Republican donors and political activists. They never spoke.

It wasn’t an intentional miss, both Tim Pawlenty and Michele Bachmann said. They came in separately, and as the event concluded, both were rushed by throngs of supporters looking for pictures, autographs and handshakes. Pawlenty said he expects to talk to her at a rally Saturday that both will be attending.

Friday night was the first time since each admitted their presidential aspirations that their paths crossed in an early primary state.

The summit, as it was being billed by Americans for Prosperity–New Hampshire, a libertarian-leaning group funded in part by the Koch brothers, was held in a large hall most often used for weddings, receptions and theater engagements. So it was fitting then, that five potential presidential aspirants wooed a sympathetic crowd with five different proposals.

Mitt Romney, the businessman and former governor of Massachusetts, was the frontrunner personified, appealing to the crowd in a state where he has a second home as one of them. Herman Cain, the former Godfather Pizza CEO and talk radio host, was the fiery orator, serving up red meat with a preacher’s cadence. And Rick Santorum, a former senator from Pennsylvania whose last appearance on the political stage was a drubbing in his home state, was here to prove he could hang on the presidential stage.

“These are all wonderful people,” Pawlenty said, “We’re all going to be on the same team because we have the same goal and that’s taking back this country and restoring America to its greatness again.” And though their eight-minute speeches were all similar in theme — President Obama they said is taking the country in the wrong direction, and conservatism provides a better economic solution — Pawlenty and Bachmann’s styles provided probably the largest and starkest study in contrast.

That’s what impressed Brett Anderson, a native Minnesotan – born in Minneapolis, raised in Plymouth – who now lives in Hanover, where he’s studying physics as a graduate student at Dartmouth College. “I’m a big fan of Pawlenty’s, all the way,” he said, saying the former Minnesota governor has the “leadership and ability to bring people together.”

Bachmann’s speech was most new. She read from an extensive list of policy prescriptions that was in total by far the most detailed economic prescription from any candidate.

Some in the crowd loved it, like a lady who rushed to Bachmann as she exited the building and told her in no uncertain terms that if she didn’t personally address a debt limit rally in Washington that an increase would surely pass. Iowa Rep. Steve King, who was in town for the event, said she “hit the notes on the issues the best.” 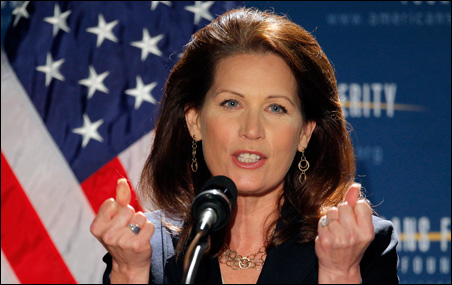 REUTERS/Brian Snyder
Rep. Michele Bachmann offered, by far, the most comprehensive economic plan at the summit.

Others said they’d heard much better from her. Former George W. Bush speechwriter Michael Gerson, for one, afterward said she told the crowd she was a tax attorney and then spoke like one.

While Pawlenty seemingly lingered around the hall forever, Bachmann was first to leave. After shaking hands and posing for pictures for about 10 minutes, Bachmann and her husband Marcus left through a side door. She took just two press questions, both from MinnPost, as she walked toward and got into a waiting van.

Bachmann’s economic prescription
Bachmann did detail though by far the most comprehensive economic plan, in the form of reading from a wish list she made before the last election of what could happen if Republicans won the election “triple crown”: Keeping the House and retaking the White House and Senate, preferably by a filibuster-proof margin.

Here’s what she said she would have pushed for:

“In my opinion, that should take committed constitutional conservatives a long weekend to get it done,” Bachmann said.

On script
The rest of the field went largely on script, and Pawlenty began it.

Santorum followed with a call to eliminate earmarks wholesale. He noted that doing that shifts spending decisions to the executive from the legislature, but said Congress had become addicted to wasteful earmarks. Cain went a step further and said, like Bachmann, he’d back a balanced budget amendment and eliminate the capital gains tax as well.

Romney’s economic prospectus was anchored in his business background — something he stressed as a key difference between himself and Obama. “He says he just inherited the downturn, and that’s right, but he made it worse,” Romney said.

As the five were speaking, Democrats responded by e-mailing opposition “fact checks” to reporters convering the speeches.

As Pawlenty blasted Obama on the deficit, the Democratic National Committee blasted him on the deficit left in Minnesota at the end of his term. With Bachmann, as she faulted Democrats for regulations she says are killing jobs, Dems in turn e-mailed statistics showing the private sector has created jobs every single month over the last year.