WASHINGTON — Right now, if I absolutely had to make a prediction and was given no option of equivocating, I’d say the government won’t shut down Friday.

GOP Reps. John Kline and Chip Cravaack both agreed last week on that point, saying no one wanted a shutdown and they were optimistic it could be avoided. The White House and Senate Democratic leaders went further, insisting that the framework of a deal was in place.

Friday is when the current continuing resolution funding the federal government runs out and, if no more money is appropriated, the government will shut down.

But I’m not nearly as sure today that government will keep on humming as I was at the end of last week. Let me explain why, and in so doing list the top three reasons why I think Congress will find a way to keep the doors of government open, alongside two reasons why I could be completely and totally wrong.

Why a shutdown will be averted
The schedule — Currently, lawmakers are scheduled to be back in their districts on Friday and over the weekend, and no one has yet proposed amending that schedule. This past weekend, members were back in their districts as well, rather than staying here trying to work on a deal. President Obama, meanwhile, is set to travel to Indianapolis to talk about energy. One imagines those plans would have to be amended if the time was needed to avert a shutdown.

The focus — Later today, House Budget Chairman Paul Ryan will unveil his 2012 budget, and it’ll be the subject of committee hearings later in the week. Democrats are working on a countermeasure. One wonders why so much attention would be paid to next year’s budget, if a deal on this year’s was so far off.

The deal — There are two parts to this. The first is that it has been widely reported (and Democrats in the Senate and the White House have confirmed on the record) that lawmakers were working negotiations around the figure of $33 billion in additional cuts for the remainder of the year. Speaker John Boehner and a majority of his GOP counterparts have said their priority is to avert a shutdown, but more than a few in his caucus have told me that he needs to project a tougher line to win as many concessions as possible. Hence, the language about a deal not being agreed until everything is agreed. But as of Friday, the expectation here was that a deal was inevitable. 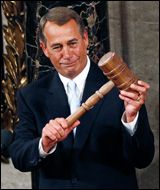 Let’s say it’s not though. Well, news came this morning that Boehner and co. are working on another continuing resolution. It would be a one-week CR that also funds the Defense budget through the remainder of the year. It would extend the negotiating timeline by just a week, and move the showdown to next Friday, the day before Congress is set to go on a two-week Passover/Easter recess.

And why a shutdown may still happen
Deal? What deal? The $33 billion agreement that seemed inevitable last week may now have fizzled under pressure from the GOP’s right flank, including Michele Bachmann, to push for more cuts. The Hill reports that Boehner is demanding more in cuts now, and even his one-week CR has $12 billion in additional cuts. Democrats, who say Boehner agreed in private to the $33 billion figure, are also talking openly about the need to hold firm on this issue so they don’t get rolled on bigger votes down the road, like the debt ceiling showdown (likely May or early June) or the Fiscal 2012 budget (a must-pass bill by September 30).

Monday, not Friday may be the real deadline day, says one budget expert who notes that a weekend shutdown might impact few people.

“While there would be headlines and would lead the news, it would barely be noticed or cause many political ripples because most of the government offices and facilities that would be affected by a shutdown would be closed anyway,” wrote Stan Collender on his Capitol Gains and Games blog.

“As a result, although the people heading to a national park or the Smithsonian might be inconvenienced over the weekend, the real deadline for getting an agreement signed is next Monday morning. That effectively gives House Republicans, Senate Democrats, and the White House until COB Thursday rather than tomorrow to get their act together.”

Solely anecdotally, I’ve heard a lot more of Collender’s thoughts come out of lawmakers’ mouths this week than I did last week. Admittedly, what I randomly overhear isn’t exactly a scientific sampling, but the line of logic certainly seems more prevalent, and that could mean a brief shutdown is in the offing.

Additionally, several lawmakers are preparing for a weekend shift. “We’ll be here Friday night, Saturday, Sunday … and they’ll work something out by Monday,” Rep. Collin Peterson told The Hill.

So will a shutdown happen? Honestly, I don’t know that anyone knows at this point. My guess is still probably not, but I wouldn’t bet too much money on that.

Will the government shut down Friday? Honestly, no one knows for sure