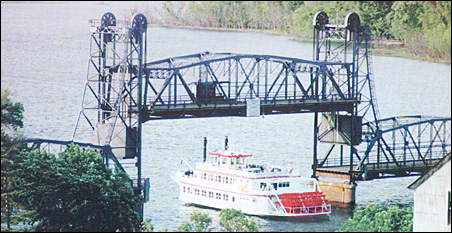 The National Trust for Historic Preservation
The Stillwater Lift Bridge has been deemed structurally deficient and is often compared to the Interstate 35W bridge that collapsed in Minneapolis.

WASHINGTON — Controversy over the location, size, cost and impact of a new bridge over the St. Croix River has been going on in Minnesota for decades now.

But when Michele Bachmann’s bill to clear past the National Park Service’s regulatory objections to a new, freeway-style bridge connecting Minnesota to Wisconsin across the St. Croix River was presented, Republicans on the panel couldn’t see what all the fuss was about.

“I think it’s a dumb issue,” said Rob Bishop of Utah, who chaired a Wednesday hearing on the bill in the House Natural Resources Subcommittee on National Parks, Forests and Public Lands. “It should have been done a while ago.”

Furthermore, if a new bridge needs to be built, Bishop said it makes sense to build it big enough to handle any future traffic needs and to build it in an industrial area, near a wastewater treatment plant, rather than connecting it in Stillwater.

“It seems like a no brainer,” Bishop said. “It seems logical to do it.”

Comments like that from House Republicans, and support of the concept from some House Democrats like Wisconsin’s Ron Kind, means that Bachmann now has her best shot yet in her three-term career to get her first proper bill through the House, despite the fervent objections of other Democrats like Betty McCollum.

Pieces of the bridge and the costs of a new one
Last week, an ambulance driver headed back to Lakeview Hospital faced a decision that paramedics do all the time in crossing that bridge from Wisconsin back to Minnesota: To wait their turn or try and force through bridge traffic on a span without sufficient shoulder room.

As they almost always do, they went for the quickest route. And, as often happens, a car that couldn’t move over enough had its wing mirror snapped clean off.

Kurt Geissler, president of Lakeview Hospital in Stillwater, said he’s lost count of the times an ambulance has lost its own wing mirrors or broken those on another car.

Stillwater Mayor Ken Harycki brought pieces of the bridge to the hearing and set them on the committee table. There, in small plastic bags, were hunks of concrete and rusted-off metal that he’d picked up.

The Stillwater Lift Bridge has been deemed structurally deficient and, as with any bridge conversation in Minnesota, is often compared to the Interstate 35W bridge that collapsed in Minneapolis. That bridge had a rating of 50, the last time it was inspected before it fell. The Stillwater bridge 32.8, as inspected in July of 2009.

Harycki said it only makes sense, if you’re going to replace the bridge, to put in a new one that will be able to handle all the traffic it might see.

On the question of whether a new span must be built, there is no disagreement, McCollum said. However, there’s intense disagreement about just what should replace it.

“Clearly, this legislation can only be described as a stalking horse for an excessively expensive mega-bridge to be built only six miles from the existing eight lane Interstate-94 St. Croix River crossing,” McCollum said. 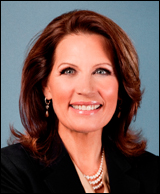 While Bachmann, Harycki and Geissler testified in favor of the proposed freeway-style bridge, McCollum and Oak Park Heights Mayor David Beaudet are among those in favor of a smaller, slower bridge that wouldn’t run bluff to bluff across the river, but would connect diagonally across.

Of the nearly $700 million price tag for the bridge and immediately related projects, Minnesota would be expected to pick up about $380 million of that, with Wisconsin adding in $250 million to $310 million. State Department of Transportation spokesman Kevin Gutknecht says that’s not right, that Minnesota has $363 million already set aside in “state highway trunk bonds and federal funds.” Instead, he said, Wisconsin is the state that hasn’t identified its costings.)

Opponents are quick to note that the estimate doesn’t include the costs of revamping roads from the bridge into St. Paul, which they say can’t come close to handling the load. That could increase the costs by another $200 million to $300 million, they say.

Beaudet says that, in a time of budget crunching, Minnesota simply doesn’t have it. “If Congresswoman Bachmann would earmark the money, I’m sure he’d [Dayton] take it.”

Bachmann said Wisconsin Gov. Scott Walker has pledged his part, and both she and Harycki said Dayton told them that, should the congressional approval come through, Minnesota is committed to the bridge project and the money for that would be there. Dayton’s office confirmed that conversation, and Harycki’s retelling of it.

Beyond the House
The next step in this process is a full committee markup on the bill, then if it clears that a full debate and vote in the House. Republican leaders said no such markup has been scheduled, but they called it a question of when, not if.

In the Senate, which has a tradition of home-state deference, Sen. Amy Klobuchar has already gone on record in support of the project, though her plan to clear aside regulatory objections to the bridge differs slightly from Bachmann’s.

Klobuchar and Wisconsin’s Herb Kohl plan to introduce a similar, but not identical, measure in the next few weeks that would exempt the bridge project from the Wild and Scenic Rivers Act using existing exemption procedures in that law. Wisconsin Rep. Kind said he would prefer a narrow tailoring like that as well. 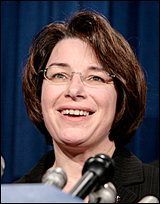 It’s worth emphasizing that neither plan would actually build a new bridge. Instead, they’re variations on ways to get around a National Park Service ruling that said a new span would be in violation of the Wild and Scenic Rivers Act. The St. Croix River was one of the original eight rivers included under that law, originally pushed by former Sen. Walter Mondale, and remains the only river in Minnesota included on that list.

The core difference between the two plans, legislative analysts say, is that Klobuchar’s bill uses existing law while Bachmann’s goes around it. And that’s an important distinction to the National Park Service, a senior official told the committee.

“We are very concerned about the precedent that such legislation would establish, given that the [Interior] Department found the bridge project would have a direct and adverse effect on the designated river,” said Steve Whitesell, NPS associate director for park planning, facilities and land.

Still, as Whitesell noted under questioning from Chairman Bishop, the Park Service opposes the proposed freeway-style bridge, no matter if it’s an exemption or end-around. If Congress is going to do it anyway, Whitesell said, they’d rather lawmakers not set that precedent.

Sen. Al Franken is currently undecided on the bridge project as a whole and is weighing the matter, a spokesman said.

“Sen. Franken wants to make a thoughtful decision about this issue and is carefully evaluating all the input he’s received from key stakeholders, but plans to weigh in soon,” said spokesman Ed Shelleby. “He’s visited the site, spoken with residents, local elected officials, and representatives from the National Park Service, and talked with environmental groups.”

Bachmann said she’d prefer identical legislation in the Senate to ensure the bill gets passed as worded, and not revised or pushed aside in favor of something else that might give “bureaucrats” a chance to further stall the legislation.

A White House spokesman said they had no comment on the legislation so far.

But it’s worth noting that at least part of the Obama administration, in the form of the National Park Service, is strenuously opposed to the project no matter what the bill looks like.