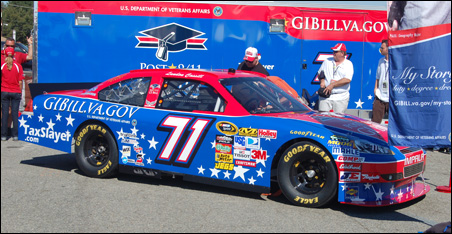 McCollum’s amendment was one sentence long, and was offered as an attachment to a $72.5 billion bill covering military construction and the Department of Veterans Affairs. The amendment would have prohibited any funds in the bill from being used “to sponsor motorsports race drivers, racing teams, or racing events.”

It failed on a 5-8 vote, according to Congressional Quarterly, though the subcommittee’s Republican chairman, John Culberson, asked during the hearing for his staff to gather additional information on the VA’s advertising efforts.

McCollum Chief of Staff Bill Harper cited VA advertising at a race in Richmond, Va., run last year on Sept. 11, as the inspiration for this amendment.

In an effort to promote the Post-9/11 GI Bill, the VA spent $200,000 as one-night-only title sponsor of Landon Cassill’s #71 Chevrolet. As part of that deal, Cassill came to Washington with a car painted red and blue and did a burnout in front of the VA’s Washington headquarters, and he appeared in promotional materials leading up to the race.

The VA spent a further $250,000 to be an event sponsor for the “Post-9/11 GI Bill NASCAR Weekend at Richmond,” including the NASCAR Sprint Cup race there that weekend. That was nearly half of the $1 million total that the VA had to spend on advertising the GI Bill, Harper said.

Officials at the Department of Veterans Affairs did not immediately return a call seeking comment, however in a statement last year announcing the sponsorship, VA officials said they hoped to use the Richmond racing weekend as an outreach opportunity.

“We are extremely pleased to partner with this all-American event to generate awareness of the Post-9/11 GI Bill and all of the opportunities available to our country’s Veterans and service men and women,” said Keith Wilson, director of VA’s Education Service in that statement. “We look forward to providing valuable benefits information and services at our booths at the raceway, and hope to reach many who qualify and those who may know someone who served and could benefit.”

That wasn’t the only federal spending at that race though. The Air National Guard was title sponsor, for more than $600,000. So all in all, well over $1 million was spent by the federal government in marketing and advertising for just that one race in Richmond.

In addition, the military has several ongoing sponsorships of other cars — Ryan Newman’s #39 US Army Chevy costs the Army $7.4 million a year as title sponsor, while the National Guard has deals with drivers including Dale Earnhardt Jr. — and the Army spends a further $8 million annually on what the New York Times called “programs that aid in recruiting” at NASCAR events.

Lt. Gen. Benjamin Freakley, head of the Army’s Accessions Command, defended the large investment when he told the Times that the Army got 46,000 leads out of its NASCAR marketing programs in 2010.

This is not the first time McCollum has tried to ban federal sponsorship of NASCAR and motorsports. Earlier this year, an amendment she offered to ban Army sponsorships in motorsports failed on a vote of the whole House, 148 in favor to 281 against.