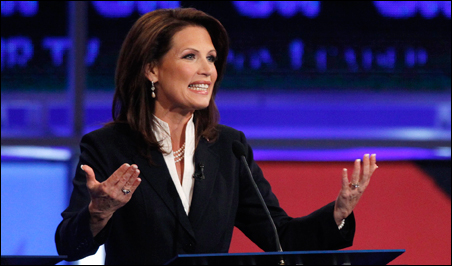 WASHINGTON — Michele Bachmann walked into the hockey rink at St. Anselm College in Manchester looking to show she belonged on stage alongside six declared presidential candidates.

It was a debate in which the entire field assembled all but pledged to contest the 2012 Republican nomination for president on the right side — perhaps the far right — of the GOP by articulating ardently conservative positions with none on the stage even attempting to stake out a centrist or liberal position on any issue presented.

That just so happens to be Bachmann’s home turf. And if the other six didn’t take her seriously before, they’ll have to now after a performance that most analysts said was one of the two strongest of the night.

Bachmann told CNN’s John King, the assembled crowd and the television audience on CNN, CNN.com and WMUR in New Hampshire that she’s running for president. An official announcement will be forthcoming, she said.

And with that, Minnesota officially has two major candidates in the presidential field, the first time that’s happened since Hubert Humphrey and Eugene McCarthy in 1968.

The other one, the former Gov. Tim Pawlenty, had what could be considered a decent-to-good performance, except for one key moment that overshadowed the rest.

Pawlenty trips on Obamneycare
The debate started off on Pawlenty’s turf, with candidates agreeing with the fundamentals of his big economic plan offered up last week.

“The ideas that Tim describes, those are in the right wheelhouse,” said Mitt Romney. Rick Santorum, who has said he supports Paul Ryan’s budget 100 percent, also complimented Pawlenty, though he wouldn’t get drawn in on the details.

“There’s nothing wrong with having a 5 or 10 or 15 percent target,” agreed Texas Rep. Ron Paul, so long as the United States unwinds the Keynesian economic model, promotes a strong currency and leads with a free market-style economic plan.

And then it happened.

CNN’s King asked Romney about Pawlenty’s “Obamneycare” comment on Fox News on Sunday, and gave Pawlenty the chance to expound. Pawlenty didn’t take it. King asked again, and Pawlenty continued on with an excerpt from his stump speech about how Massachusetts did one thing but Minnesota did something different. Asked again, Pawlenty said he was responding to a question from a reporter and that he was simply citing Obama’s own words that he looked to Massachusetts as a guide for the health care law.

“But you chose — you say you were asked a question, which is fair enough, but you chose those words,” King persisted. “And so one of my questions is, you know, why would you choose those words maybe in the comfort of a Sunday show studio — your rival is standing right there.

“If it was Obamneycare on Fox News Sunday,” King continued, “why is it not Obamneycare with the governor [Romney] standing right there?”

“President Obama is the one I quoted in saying that he looked to Massachusetts,” Pawlenty responded. “He’s the one who said it was a blueprint and that he merged the two programs, and so using the term Obamneycare was a reflection of the president’s comments that he designed Obamacare on the Massachusetts health care plan.”

Michael Steele, the former chairman of the Republican National Committee, wrote on Twitter: “TPaw blinked on ‘obamanycare.’ That was his moment.”

There were strong moments elsewhere in the debate. Pawlenty earned applause from the GOP-friendly crowd for his impassioned defense of right-to-work legislative efforts, and the crowd also appreciated his comments on separation of church and state — even if he did mix up the Declaration of Independence and Constitution in saying the latter establishes one nation under God (that’s the Declaration, the Constitution doesn’t have the word “God” anywhere in it). 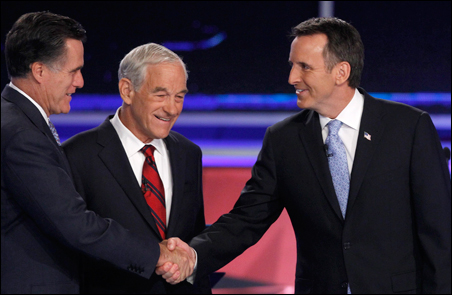 Pawlenty also had a rational defense of a modified space program — urging public-private partnerships to help keep the United States at the forefront of space exploration and research. It was a point aided by the contrast Newt Gingrich tried to draw with it, in which the former House speaker aimed to make a nuanced point but wound up sounding legitimately upset that the United States doesn’t have a functional and permanent moon base alongside multiple space stations right now.

But in summing up the debate for Pawlenty, analysts returned to that Obamneycare exchange.

“A small nightmare for Pawlenty,” said Dante Scala, a political scientist at the University of New Hampshire, summing up his performance. “His refusal to take on Romney in person on health care made him look weak in front of a national audience.”

Outsider finds her voice
One of the most frequent accusations levied against Michele Bachmann the member of Congress is that she’s not a serious legislator. Aside from the Stillwater Bridge replacement bill, most of her efforts have been broad sweeping legislation that makes clear where she stands but doesn’t have a hope of getting signed into law.

Bachmann introduced no-hope legislation the day after the health care law passed to repeal it wholesale. She introduced a no-hope bill to fully repeal the Dodd-Frank financial reform bill shortly after it passed too.

She’s also got an independent streak that can frustrate allies in her party. She founded the House Tea Party Caucus, which she still chairs, despite the calls from some Tea Party-affiliated members of Congress that such a group was too formal and establishmentarian for the Tea Party. And she has demanded that House Republicans hold firm on the debt ceiling and budget cuts with such ferocity that members of her own party in closed caucus meetings have told her to tone it down.

Yet on the presidential stage, those moves dovetailed into easily-delivered sound bites. You want this? I fought for it in the House, was the basic tenor of her answer, repeated and customized to at least four questions from King on health care, financial reform, the validity of the Tea Party and on Libya.

“If people only know her for the occasional sound bite they might have been surprised by her performance,” said Matthew Masur, a Minnesota native who’s now a professor at St. Anselm College, where the debate was held. “If you watched only the debate you would not think she had a reputation as a firebrand.”

“She moves to the head of the class among very conservative voters,” Scala said, leaving behind Santorum, Herman Cain and Gingrich. Nate Silver of the New York Times’ FiveThirtyEight blog said Bachmann’s at the top of the second tier of candidates now, behind only Romney and Pawlenty.

It was an unscientific study of one, but my Republican friend sitting next to me as I watched the debate (who hates Bachmann) was even forced to grudgingly admit that “she sounds pretty good here.”

This was a coming out party for Bachmann as a presidential candidate, and for about two minutes I could have said that in more ways than one.

Asked what her thoughts were on gay marriage initiatives in the states, particularly New Hampshire, Bachmann said she was a believer in the 10th Amendment and that the job of the federal government isn’t to overrule states. As she continued explaining, it seemed as if she was all for allowing states like Vermont, Massachusetts and Iowa that have moved to legalize gay marriage to keep on keeping on.

And then she clarified, saying she wants a constitutional amendment defining marriage as between a man and a woman. Constitution trumps state laws, so no gay marriage under a President Bachmann’s dream scenario.

No, we still don’t know how Bachmann would balance the budget in Year One, but we’re assured it will happen. (By my count she’s still about $900 billion away from that answer in her most detailed plan. Perhaps those and other details will be forthcoming in a later debate.)

Strident field seemingly accepting of Romney
One major candidate wasn’t at this debate: Jon Huntsman, the Utah governor and former ambassador to China, and without him no one even attempted a case for moderation.

Bachmann staffers, as she spoke about being pro-life from the moment of conception through natural death, tweeted that Bachmann supports laws that would require mothers seeking an abortion to hear the fetal heartbeat before getting one.

Herman Cain got in some trouble before the debate for saying he’d require a Muslim seeking a job in his administration to take a loyalty oath to the Constitution as a prerequisite for the job — something he wouldn’t require of others, like those who profess to be Christians or Jews.

After that, Newt Gingrich followed by seemingly running to the right of him, saying that the people might lie in those loyalty oaths and then suggesting more stringent tests, like the kind Joseph McCarthy had when he was investigating people accused of being members of the Communist Party.

The only major rift in the field was on foreign policy — Ron Paul mainly but also Bachmann and, to a lesser extent, Romney sketching out a position of fewer troops abroad while Pawlenty and Santorum have called for a more strong-armed national security policy.

Yet in all that, no one really took a shot at the presumed frontrunner, Romney — which was somewhat odd considering that the entire campaign against Romney is that he isn’t conservative enough.

Romney has been criticized before — heavily in the 2008 campaign — for his switch from being pro choice to being anti abortion, with some suggesting (as moderator King noted) that the switch wasn’t genuine. Every single candidate refused, when asked, to question it, and furthermore they all agreed it was a “dead issue.”

Romney will take that, as he certainly will the flat-out unwillingness of anyone bar Pawlenty to question his oft-criticized health care plan. Instead, he offered an explanation for his own plan in Massachusetts, said he’d work to repeal the national health care law and, in the meantime, give every state an immediate waiver from implementing the law.

“Tonight’s Republican debate was a reminder that we’ve been down this road of failed economic policies and proposals before,” said Democratic National Committee Chair Debbie Wasserman Schultz. “The economic recession in America wasn’t caused by bad luck; it was caused by bad Republican policies.  But the Republican candidates are doubling down on the same flawed policies that led to the loss of 3.6 million jobs in the final months of 2008 and gravely affected middle class families across America.

“And if those policies weren’t bad enough, we heard support tonight for policies as extreme as ending Medicare and privatizing Social Security — policies the American people have rejected over and over again.

“The debate tonight put into stark relief the contrast between the Republican presidential candidates and President Obama.”

While Republicans would vigorously contest the majority of her interpretation, on that last sentence alone, I suspect she’d find no disagreement whatsoever from the field assembled.