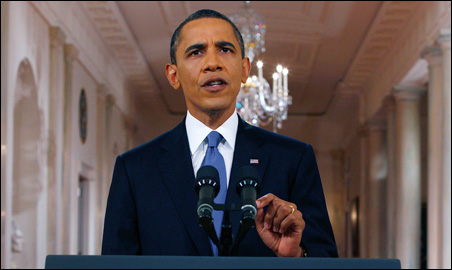 REUTERS/Pablo Martinez Monsivais
President Barack Obama addressing the nation about the war in Afghanistan from the East Room of the White House on Wednesday.

WASHINGTON — Saying the “tide of war is receding” in Afghanistan, President Obama announced Wednesday night his plan to remove some 33,000 troops from the country by next summer.

Obama announced his plans in a nationally televised address Wednesday from the East Room of the White House. He announced the surge in December 2009 at the West Point Military Academy.

“We’re starting this drawdown from a position of strength,” he said, noting the damage American and allied forces have inflicted on the Taliban and al Qaeda leadership and the 100,000-troop increase in the Afghani security force, which Obama said has begun defending parts of the country.

Obama said the death of Osama bin Laden was a crippling blow for al Qaeda, but it  “remains dangerous, and we must be vigilant against attacks. But we have put al Qaeda on a path to defeat, and we will not relent until the job is done.”

Military advances made a drawdown possible, though Obama warned that it was only the beginning of the wind-down in Afghanistan. NATO allies will meet in Chicago in May to discuss the war effort, and a settlement between Afghan political groups — including, Obama said, the Taliban — will need to be finalized in the years before American troops leave the country.

Obama said leaving Afghanistan after more than a decade at war will allow the county to “focus on nation building here at home.”

“When Americans go to war, America needs to win,” Pawlenty, the former Minnesota governor, said during an appearance on “The O’Reilly Factor.” “We need to close out the war successfully.”

Republican front-runner Mitt Romney issued a statement that said, “We all want our troops to come home as soon as possible, but we shouldn’t adhere to an arbitrary timetable on the withdrawal of our troops from Afghanistan. This decision should not be based on politics or economics.”

On the other hand, Jon Huntsman, the newest declared candidate in the race, called for a quicker withdrawal.

“We need a safe but rapid withdrawal which encourages Afghans to assume responsibility, while leaving in place a strong counter intelligence and special forces effort proportionate to the threat,” Huntsman said in a statement.

The Michele Bachmann campaign did not immediately release a statement, but on Wednesday she told The Weekly Standard, “On Afghanistan, I firmly believe that we are at a point where we’ve got to stay the course, and we’ve got to finish the job … I believe that we will be victorious, and we’ll end it. I understand why people are frustrated. I completely understand. But I do trust General [David] Petraeus in that effort and in what he is doing over there. And I think that they are doing what we need to do.”

Republican leadership in the House and Senate issued statements supporting Obama’s 2009 troop surge, though they cautioned about drawing down too quickly.

The House Minority Leader, Democrat Nancy Pelosi, said, “Concluding this war will enable us to reduce the deficit and focus fuller attention on the priorities of the American people: creating jobs and investing in our nation’s future by building a strong, thriving economy for our children.” She acknowledged, though, that “many in Congress and across the country [hoped] that the full drawdown of U.S. forces would happen sooner than the President laid out.”

One of those members of Congress is Keith Ellison. As a co-chair of the Congressional Progressive Caucus, the Minnesota Congressman sent a letter to Obama in May asking for “a near-term and significant drawdown of U.S. troop levels” beginning next month.

Minnesota Rep. John Kline, a former member of the Marine Corps who sits on the House Armed Services committee, issued a statement warning against a hard timetable for withdrawal.

“Our goal in Afghanistan is to see them become a stable country that denies the Taliban and al-Qaeda a safe haven from which to launch attacks against Afghanistan, Pakistan, or the U.S. and its allies,” he said. “To that end, Congress should be wary of any timeline that could impact the momentum achieved by the surge of forces that arrived last year.”