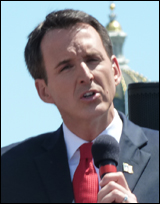 WASHINGTON — The Iowa caucuses are still six months away, but with stagnant poll numbers and weak fundraising, it’s no secret former Minnesota Gov. Tim Pawlenty’s presidential campaign has made a strong showing at next month’s Iowa Straw Poll in Ames a top priority.

Longtime Iowa political observers say the straw poll has achieved an importance that comes close to rivaling that of the actual caucuses themselves. The top finishers in the straw poll see a huge polling and fundraising boost, longtime Iowa political columnist David Yepsen said, while alternatively a poor showing means an uphill climb for winning February’s caucuses — or it could doom a campaign altogether.

So after hitting a rough patch at the end of June, the Pawlenty camp has subtly drawn comparisons to Mike Huckabee, the former Arkansas governor who rode a surprise second-place finish in the 2007 Iowa Straw Poll to a victory in that January’s caucuses.

In announcing its meager $4.2 million second quarter fundraising numbers, the campaign noted: “[Pawlenty] begins the third quarter with more available cash-on-hand than the Republican who won the Iowa caucuses.” That, of course, was Mike Huckabee. And after his 6 percent showing in the June 26 Des Moines Register poll,” Pawlenty told a television station: “Mike Huckabee won the Iowa caucuses last time and he was actually lower in the polls at this point in the campaign that we are.”

The campaign has also hired a series of former Huckabee staffers, including his 2008 national political director — and daughter — Sarah Huckabee Sanders, who is directing Pawlenty’s grassroots efforts in Iowa.

Pawlenty spent all last week campaigning in Iowa. It’s the type of retail politics former Huckabee staffers said helped their candidate gain a foothold in Iowa, and it was the most important component to Huckabee’s successful strategy there.

All eyes on Ames
Winning the Iowa Straw Poll, where there are generally just more than 10,000 voters, is all about attracting several thousand Iowa supporters, then getting many of them to go to trek to Ames to voice their support.

“You can buy everyone a ticket, but you have got to get people willing to commit to actually going there,” said Yepsen, now the director of the Paul Simon Public Policy Institute at Southern Illinois University. 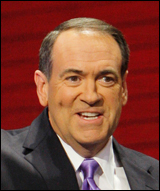 “If Pawlenty can do the same thing, I think he will do well,” he said.

Huckabee spent six straight weeks campaigning in Iowa leading up to the straw poll, traveling through all 99 of the state’s counties. Saltsman said it allowed Huckabee to meet with voters and gain just a small handful of supporters each day.

The Huckabee campaign built up coalitions of like-minded voters that could be inspired to support their candidate, despite little money and low polling numbers. The campaign targeted and organizations coalitions rooted around everything from support for the Second Amendment and the Fair Tax to a group of runners (Huckabee famously lost more than 100 pounds by jogging during his time in office).

In doing so the campaign did two critical things: it identified its strongest supporters and inspired as many as they could to come out to support their candidate, Huckabee’s 2008 Iowa campaign chairman Bob Vander Plaats said.

“When you don’t have money you have to rely on a grassroots effort,” he said. “You can win with grassroots in Iowa.”

“We would have been ecstatic if we had had the fundraising that Pawlenty had,” Vander Plaats said.

But the campaign used all it could focusing on — what else? — Ames, spending all but a few thousand dollars during the ramp-up to the straw poll.

“Presidential campaigns don’t lose. They run out of money,” Saltsman said. “If you’re not spending on the Iowa Straw Poll, you’re wasting money.”

‘The Excitement Gap’
If they want to, Pawlenty’s staff of Huckabee alums could be able to model a campaign strategy off of the one they used four years ago (though the Pawlenty campaign declined to make them available for this article).

But the candidate still matters. And while Pawlenty and Huckabee share similar political backgrounds (conservative two-term governors in states historically known for producing Democrats), there is what Yepsen calls the “excitement gap” between the two.

Yepsen called Huckabee, a former evangelical minister, “gregarious and affable,” and said “it was hard to tell if you were listening to a sermon or a campaign speech” when Huckabee was on the stump. Pawlenty, on the other hand, has been overshadowed rhetorically by fellow Minnesotan Michele Bachmann, who has risen quickly through the polls, both in Iowa and nationally.

Bachmann is seen as a hero for the socially conservative wing of the party, a section of the Republican voting bloc that looms large in Iowa, but is also well represented in the race. Vander Plaats, who runs the Christian-oriented group The Family Leader, said that in 2008, Huckabee was able to easily connect with that base because he was the only one courting it. But this year, everyone who is active in Iowa seems to be doing so, he said.

So someone like Pawlenty needs to stand out from that group. Yepsen recommended running a campaign based on his electability, noting, as the polls do, that most conservative voters’ top priority is defeating President Obama in the general election.

Pawlenty many have taken he first step down such a path on Sunday, when he sought to differentiate his record from Bachmann’s, which he called “nonexistent.”

But he’ll also need to separate himself from Mitt Romney, who won the 2007 Iowa Straw Poll and is tied with Bachmann for the lead in June’s Des Moines Register poll. But together, Romney and Bachmann supporters made up less than half of the respondents to that poll, meaning those with fewer supporters (including Pawlenty) still have more than half the electorate to impress before February’s caucuses.

Part of Huckabee’s strategy included using strong debate performances to his advantage, but debates “have to be memorable for the right reasons,” Vander Plaats said. That means no “Obamneycare” misfires like the one that marred the second half of Pawlenty’s June.

Pawlenty, and all the candidates, will have many other chances to debate before the caucuses — including one scheduled the week of the straw poll in Ames.

So for those seeking to gain ground in Iowa, all roads lead to back to the straw poll. And for Pawlenty, courting a chunk of several thousand voters during a mid-August weekend in a central Iowa city called Ames could prove to be a make-or-break moment for his campaign.

“He can use this as a way to change the narrative,” Yepsen said.

To win in Iowa, Pawlenty could take the Huckabee approach