The trailer for “Fire from the Heartland”

WASHINGTON — Michele Bachmann got a free advertising boost ahead of last weekend’s Iowa Straw Poll when Citizens United announced they would be plugging a film “starring Michele Bachmann” on billboards and in radio and Internet ads before the event.

The movie, titled “Fire from the Heartland,” profiles several Republican women and explores their role in the Tea Party movement. It opens with a monologue from Bachmann, and she’s clearly one of the main focuses of the film, but she wasn’t technically the “star” until her presidential campaign took off. That’s when Citizens United, which produced the film (available here), pegged her as the lead attraction and used her newfound popularity in Iowa to sell more copies of the film, the movie’s director, Steve Bannon, said. 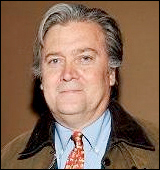 But whether the ads were meant to promote her or the movie, billboards and TV spots with the candidate’s face looming large can only help to raise Bachmann’s profile among conservatives, especially women, the voting bloc to which the film is devoted.

Research shows that women make up only a small segment of the Tea Party movement, but their numbers grew in 2010 and have continued since then, Bannon said. In 2012, with Bachmann on the Republican presidential ticket or not, Bannon predicted conservative women will play a critical role in deciding the election.

“The path to the White House in 2012 goes through working class women,” he said. “The group that Michele Bachmann speaks to is gong to be a central fulcrum in 2012.”

‘One of the last cowboys’
“Fire from the Heartland” groups Bachmann and former Republican vice presidential candidate Sarah Palin in a segment devoted to profiling some of the most famous women in the conservative movement: Phyllis Schlafly, Clare Boothe Luce and Margaret Thatcher among them.

The panel of conservative women the film features describes Bachmann as, “a kindred spirit,” “one of the last cowboys” and, “a strong-willed woman who takes no prisoners.” 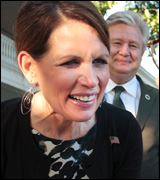 Palin and Bachmann are playing different roles in the Tea Party, Bannon said. Bachmann is the firebrand, the “Patrick Henry or Thomas Paine,” and Palin is the hands-on former executive with governing experience. Bannon, who also directed the Palin documentary “The Undefeated,” made his allegiance between the pair clear.

“If Gov. Palin doesn’t get in [the race for president], I’ll wait and see” before making an endorsement.

Bachmann, meanwhile, is seen as one of the top two or three contenders for the Republican presidential nomination. After her Iowa straw poll victory, Bachmann is the early favorite to win the first-in-the-nation caucuses there. She’s done it by appealing first to the Tea Party faction of the Republican Party, courting fiscal conservatives who want to dramatically shrink the size of government.

The make-up that movement, Bannon said, shows just how important the conservative woman vote is going to be in 2012.

Women, Bannon contends, feel the effects of the recession more than others. As the “Chief Operating Officer of the family,” they feel the rising costs of gas, food and student loans more than others. So they’re attracted to the Tea Party because of its desire to cut the size of government and the burden on taxpayers, he argues.

An identifiable gender gap
Not everyone agrees with that assessment, of course.

“Women like Michele Bachmann do not support policies that advance equality of women,” said Bonnie Grabenhofer, the executive vice president of the liberal group the National Organization for Women. She pointed to Bachmann’s opposition to abortion rights and support for funding cuts to entitlement programs that women disproportionately rely on.

“A majority of women won’t support her because of that.”

While NOW is primarily a political organization advocating for women’s issues, it has a history of contributions to political science research as well. In the 1980s, one of NOW’s former presidents devised the theory of what’s now called the “gender gap,” hypothesizing and eventually proving that women tend to identify with and support Democrats more than Republicans. 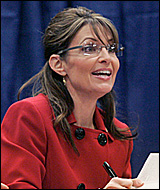 Recent research suggests that despite the high profile of several women in the Tea Party, the gender gap still exists.

The Center for American Women and Politics determined that in 2010, during the rise of the Tea Party, “the gender gap is alive and well,” citing exit polling that showed women were more likely than men to vote for Democrats by a 7 percent margin in U.S. House races.

That gap did shrink from 2008 to 2010, but since last year’s election results swung back in favor of Republicans, that was to be expected.

“The gap was particularly wide in 2008, so in the next cycle, when a lot of Republicans did well, that mattered,” University of Minnesota political science professor Kathryn Pearson said.

Polls of the Tea Party movement itself show more support from men than women, too. An April Gallup poll showed stronger negative attitudes toward the Tea Party from women instead of men. Only about 26 percent of women held a favorable opinion of the movement — less than the 34 to 49 percent of men who viewed the Tea Party favorably. And as of July 12, men held a 54-6 membership advantage in the House Tea Party Caucus, which Bachmann chairs.

That’s not to say women aren’t involved in the Tea Party, of course — several of the Tea Party’s highest-profile leaders and candidates (Bachman and Palin, along with 2010 U.S. Senate candidates Christine O’Donnell and Sharron Angel) are women.

But, “those women are still anomalies within Republican politics and Tea Party politics,” Pearson said.

Bachmann film praises the role of women in the Tea Party