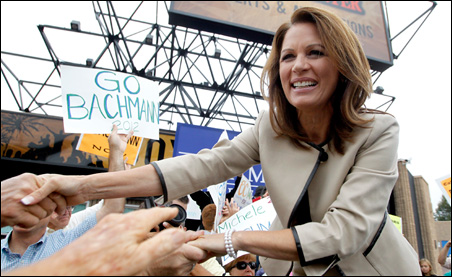 WASHINGTON — Michele Bachmann’s former presidential campaign director, Ed Rollins, said Monday that she “doesn’t have the ability or the resources” to go much beyond Iowa without a big victory in the state’s caucuses over the winter.

After surging to victory in the Iowa Straw Poll, she’s been overshadowed by Texas Gov. Rick Perry’s entrance in the race, which has pulled supporters from Bachmann. She’s had uneven performances in the pair of debates since then, following up her strong performance last week by propagating a vaccination conspiracy theory that became a painful week-long story for the Bachmann campaign.

Her supporters, including the chairman of the Minnesota 6th Congressional District GOP, say Iowa’s as good a place as any for her to turn it around.

“I think she has a great chance of success there,” David FitzSimmons said, especially if she can appeal to voters in one-on-one settings.

But if she falters in the caucuses and Rollins’s Iowa-or-bust prognostication turns out true, what would be next for the third-term Congresswoman from Minnesota’s 6th District? Here are some options:

Run for her House seat
Bachmann has said she will not seek re-election for her 6th District House seat while she’s running for president. But if she’s forced to back out of the presidential race — either by lack of money or poor performances in the early primaries — she has until June 5 to decide if she’s going to run for reelection to Congress.

For as long as Bachmann is on the presidential campaign trail, the 6th District race will be completely up in the air. No Republicans have stepped forward to offer a primary challenge, and most have said they’ll wait until her presidential fate is determined before making any final decisions on running (presumably to defer to Bachmann if she wants to seek reelection).

No Democrats have declared to run in the race, and Bachmann’s chief 2010 opponent, Tarryl Clark, bought a condo in Duluth to seek the DFL endorsement to run against Rep. Chip Cravaack in the 8th District.

Complicating everything is the matter of redistricting. The Republican-controlled Legislature kept Bachmann’s district intact for her, but with no formal ruling from the courts on where the final lines will fall, potential Bachmann opponents are left in the dark as to what that district will end up looking like. 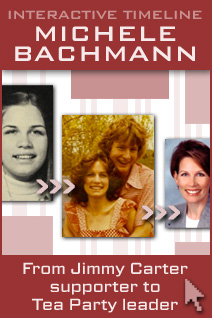 If Bachmann returns to Congress after her presidential bid, her newfound national notoriety wouldn’t necessarily translate to more congressional clout. University of Minnesota political science professor Kathryn Pearson said Bachmann would likely follow the Ron Paul model: a large national following and a willingness to break with party leaders in the name of ideology, but not much else in terms of new duties on Capitol Hill.

But if Bachmann needs to return to the 6th to run for her House seat, FitzSimmons said she’ll be welcomed back to the district with open arms.

“She’s always had a good support base in the 6th,” he said. Plus, “I don’t know of any case where someone has been punished [by voters] for seeking higher office.”

FitzSimmons pointed to Joe Biden, who in 2008 won both the vice presidency and re-election to his long-time U.S. Senate seat in Delaware.

Run for vice president
Bachmann wouldn’t have the same luxury as Biden would. If she fails to grab the party’s nod and the eventual nominee wants her on the bottom of the ticket, Bachmann would need to choose between her running for her House seat or the vice presidency — Minnesota law bars anyone from running for both positions as a major party candidate.

That is, of course, assuming the nominee would want her there, and whether he is looking to add a healthy dose of conservativism to the ticket.

In 2008, with moderate Republican John McCain on course to win the party’s presidential nomination, he chose the more zealous conservative Sarah Palin to appeal to the party base while he worked to attract independents. There could be a circumstance like that in 2012, if the more moderate Mitt Romney wins the presidential nod despite his cool support from the Tea Party. In an effort to appeal to that group of Republicans while also reaching out to the independents, Bachmann could be tailor-made for the task (though she’s not the only one, and certainly hasn’t  garnered as much buzz as other Republicans).

But 2008 was an unusual situation, Pearson said. More generally, presidential nominees look for a running mate they would be comfortable governing with, not necessarily one who can bolster their ideological chops.

And given her propensity for breaking with congressional leadership, Bachmann might not be too keen on playing second fiddle.

Do something else
Bachmann could skip any of those routes, of course. She could choose to challenge U.S. Sen. Amy Klobuchar next fall (Republicans are still without a top-tier candidate with high name recognition), but she would need to decide on that by June 5. She could also take the Mike Huckabee/Sarah Palin route — leave public office behind and take a job as a political commentator.

(Update: As a reader has noted, I missed another rather compelling option for Bachmann, which would be to challenge Sen. Al Franken in 2014. The group of Republicans looking to get in that race is going to be large, and depending on what happens next fall, Bachmann would have to be considered a possible opponent.)

And if President Obama wins reelection, we, of course, still have 2016…