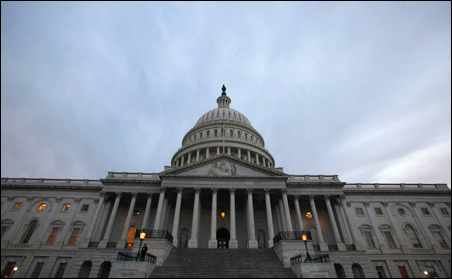 WASHINGTON — After a month-long recess, Congress reconvenes in Washington this week with jobs at the top of its agenda.

President Obama will address Congress on Thursday to detail a jobs plan that’s likely to garner the support of only his half of the room. Republicans, meanwhile, have released an agenda that calls for large-scale government deregulation in order to spur private sector job growth. The House will vote on the first Republican bill, one that originated on Minnesota Congressman John Kline’s Education and the Workforce Committee, next week.

“It’s clear that this is issue number one for Americans,” Congressional scholar Norm Ornstein said. The question now is whether Congress can put aside its partisan differences to come to an agreement.

While a jobs plan is the most high-profile matter before Congress, it’s not the only thing lawmakers have on their plate. Here’s what you can expect to hear about from Washington this fall.

Jobs
With a 9.1 percent unemployment rate only 14 months away from an election, Congress and — especially — Obama have made job creation their top fall priority.

But agreeing on the problem is a long ways away from agreeing to a solution.

Over the past month, Obama has indicated support for extending payroll tax cuts and unemployment benefits, both of which are set to expire at the end of the year. He outlined a series of proposals for increasing employment among veterans an August speech in Minneapolis, and he’s also supported the creation of a national infrastructure bank, which received the support of Rep. Keith Ellison’s Congressional Progressive Caucus over the weekend.

But the bulk of Obama’s proposal — which reportedly will total $300 billion in spending, off-set by other spending cuts — will come in an address to Congress on Thursday night.

Republican leadership indicated last week that it’s open to expanding the infrastructure funding pool by repealing requirements for states to spend 10 percent of that money on museums and training programs. It’s indicative of the rest of their fall legislative strategy: repeal major government regulations in areas like energy, labor and the environment to give private companies freer rein to hire more employees.

A few of those bills have — or will — fall under the purview of Kline’s Education and the Workforce Committee, according to a memo from House Majority Leader Eric Cantor. The first, slated to be considered next week, would disallow the National Labor Review Board from “ordering any employer to close, relocate, or transfer employment under any circumstance.” The bill was inspired by the NLRB’s complaint against Boeing that it moved manufacturing jobs from Washington to South Carolina as retaliation against its unionized workers.

Setting up Republican support for the bill, Kline — who’s spent much of the session embroiled in a fight over No Child Left Behind reform that itself is likely to come to a head this fall — said in a statement last week that NLRB rulings have contributed to the stagnated economy.

Kline’s committee is also slated to consider reforms to the Affordable Care Act, Cantor said in his memo, and possibly another NLRB repeal, which is on the agenda.

Deficit ‘super committee’
Part of the final debt-limit deal Congress approved in July was the formation of a joint committee on deficit reduction, a bipartisan, bicameral committee tasked with finding more than $1 trillion in deficit reduction measures and submitting its plan for Congressional approval before the end of the calendar year.

No Minnesotans sit on this so-called “super committee,” but its work through the fall and the final plan it submits will be among the most watched legislative developments as the leaves change and the snow begins to fall in Washington.

Ornstein said the committee is burdened with the not-so-small task of proving to voters that Democrats and Republicans can work together and agree on an overriding, important issue like the deficit. After a summer of bruising partisan battles over the debt, lawmakers have a lot to lose politically if they aren’t able to compromise on a final deal, he said.

(To illustrate the country’s distaste for Congress: a poll out Tuesday showed 82 percent of Americans disapproved of the job Congress is doing; 54 percent of poll respondents said that, if given the chance, they would vote to replace every member of Congress in 2012.)

“Is there some way this super committee can [focus on the deficit and debt],” Ornstein asked, “or will the deadlock only reinforce what Americans think about Congress?”

The committee meets for the first time on Thursday. It must report its plan by Thanksgiving and Congress must pass it by Christmas in order to avoid further, politically-unpopular cuts to federal spending.

Passing a budget
Lost in the thick of jobs and deficits is the fact that Congress must pass a federal budget before the end of the month.

The House has passed only about half of the dozen appropriation bills that make up federal discretionary spending, many of them on nearly party-line votes. The Senate has approved only one bill.

Each chamber must pass their respective bills before a committee is convened to hash out the differences. Once the changes are made, each chamber must again pass the identical bills before Obama signs them into law. All that has to happen before Oct. 1, when the 2012 fiscal year begins.

Absent a budget, parts of the government could face a shutdown (unless Congress passes a resolution continuing current spending to buy more time to negotiate a final budget). The 2011 budget wasn’t finalized until April of this year, so it’s not out of the question that Congress could undertake a protracted battle over the budget even as it’s negotiating a jobs agenda a deficit reduction package.

The good news, Orenstein said, is that the two parties aren’t too far off on their preferred levels of funding. Where things get sticky, however, is Republican insistence on tying funding to controversial policy changes, setting up political battles that could derail the final passage of a budget.

“I think people are being lulled into a false sense of security with [the budget],” he said.

Clashes over policy have already marred Congressional efforts to pass an extended authorization of the Federal Aviation Commission, which led to a week-long partial shutdown this summer.

And the parties do, of course, have different approaches to funding programs — take, for example, an extension of a highway program that authorizes transportation construction projects. Republicans in the House want a longer-term bill with larger cuts than those offered by Senate Democrats. The two parties have until Sept. 30 to reach an agreement and pass a bill or risk jeopardizing billions of dollars worth of highway projects and millions of jobs, including up to 12,000 in Minnesota.

Democratic Rep. Betty McCollum, the only Minnesotan on the House Appropriations Committee, has been outspoken in her opposition to many of the funding bills the House has passed this session. She blamed the crop of newly-elected Republicans for driving the country’s fiscal agenda too far to the right.

“In this tea party-controlled Congress, the appropriations process is being used to diminish government and hurt the middle class,” she said in a statement Tuesday. “Congress to must start legislating responsibly and end this destructive political game playing.”