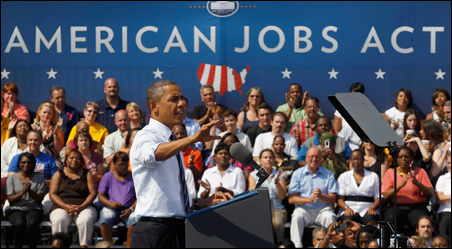 WASHINGTON — The White House predicts President Obama’s jobs bill could produce more than 18,000 jobs in Minnesota, but Republicans, some of whom were cautiously open to some of what Obama proposed in his jobs speech last week, are hitting the bill for relying too heavily on tax increases to pay for its estimated $447 billion cost.

According to the White House, the bill would create up to 18,400 new jobs in Minnesota in areas like highway construction and public schools. The bill would also reform unemployment insurance so as to help more than 71,000 long-term unemployed find work, and create a “Pathways Back to Work” fund to provide job training for low-income would-be workers. That fund could create 7,200 jobs (including 6,500 youth jobs).

The White House breaks down the jobs like this:

The bill also cuts payroll taxes for both small businesses and workers, and it extends unemployment benefits for those who have just lost their job.

It’s hard to tell just how accurate those figures are because of the metrics the White House uses to reach those numbers. For example, federal and state governments define highway projects differently, according to Minnesota Department of Transportation federal relations manager Serge Phillips.

One thing’s for sure: If the jobs plan is passed and money ends up being pumped into construction projects, MnDOT would update its master highway improvement plan with newly funded projects in order to get workers back on the job, just like it did after the 2009 stimulus act. As an example, Phillips pointed to one highway project, Highway 610, that wouldn’t have been built without the stimulus funds then. For MnDOT’s purposes, the jobs plan “would have a big impact on Minnesota,” Phillips said.

High costs leads to Republican opposition
The non-partisan Congressional Budget Office is in the process of scoring the jobs bill to determine exactly how much it will cost, but a payment plan laid out Monday by the White House has already turned off some Republicans to the bill.

White House budget director Jack Lew outlined a series of tax increases Monday that the administration hopes to use to pay for the jobs bill. Included in the plan is a limit on itemized deductions for individuals who make more than $200,000 or families who make $250,000 a year, a tax on the interest earned by investment fund managers and the end of certain tax exemptions for oil and gas companies. These three provisions would raise nearly $460 billion in new revenue.

Obama’s biggest hurdle, of course, is strident Republican opposition to tax increases (though even a Democratic Congress opposed some of these provisions during Obama’s first years in office). House Speaker John Boehner laid out the Republican case against the bill on Tuesday: “We see permanent tax increases put into effect in order to pay for temporary spending. I just don’t think that’s going to help our economy.”

The six-part plan focuses on improving American infrastructure, providing a boost to the manufacturing sector, investing in green jobs and creating high-paying jobs. It would be paid for by increasing taxes on businesses and the wealthy and ending a slate of tax breaks and loopholes.

The plan builds on Obama’s jobs agenda, but takes it further by calling for more investment in public sector jobs — for example, one part of the CPC’s plan is a bill from Illinois Democrat Rep. Jan Schakowsky that would invest in school infrastructure, the parks system, student work-study programs, first-responders and others. That bill alone costs $227 billion, more than half the price of Obama’s plan.

Like the CPC’s budget plan, the jobs agenda has little hope of becoming law, but CPC co-chair Keith Ellison said the group is “fundamentally optimistic” that the plan will be part of the conversation in Washington this fall.

“We have faith in the American people to rise up and demand that Congress pass a jobs bill,” Ellison, a Minnesota Democrat, said at a press conference. “We’re going to fight like we expect to win, because that’s how we do this.”

What Obama’s jobs plan would mean to Minnesota