That’s equates to an average donation of $42. Of course, some gave less (78 people gave $5 or less, according to Federal Election Commission data) and some gave much more.

During the fundraising quarter, the Bachmann campaign received 71 maximum legal donations of $2,500, according to a MinnPost analysis of fundraising data. The money came from both big-name Republican donors (like Stanley and Karen Hubbard) and those just looking to support their favorite candidate as much as they possibly can. We’ve highlighted some of the biggest names below.

Among Bachmann’s top donors are:

• Stanley and Karen Hubbard: Both Hubbards donated $5,000 to Bachmann’s campaign — $2,500 from each for both the primary and general election contests. The Hubbards, owners of Hubbard Broadcasting (which includes the KSTP television and radio stations in Minneapolis), have a long history of supporting Republican candidates. Both contributed to Tim Pawlenty’s presidential bid before Bachmann entered the race.

• Robert Cummins: A big-time Republican donor, the president of Plymouth-based Primera Technology Inc. gave Bachmann a $2,500 contribution on Aug. 22. Like the Hubbards, Cummins is a former contributor to the Pawlenty campaign. Cummins is a prolific Republican donor who has given more than $2 million to conservative candidates and causes since 1998 (that’s according to a Politics in Minnesota profile of Cummins published last summer. It’s behind a paywall, but worth a read if you get to it). 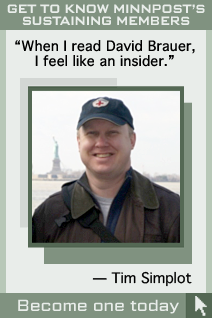 • Louie Gohmert: Gohmert is a fourth-term U.S. Congressman from Texas, and one of Bachmann’s biggest allies in Congress. He was an early backer of Bachmann’s failed bid to become the Republican House Conference Chairwoman and appeared with her during a high-profile press conference during the debt ceiling debate over the summer. At the time, he joked that the next president could be “even someone in this room.” Bachmann is the only candidate to receive a donation from Gohmert.

• A handful of Minnesotans: Beyond the Hubbards and Cummins, nine other Minnesotans donated the legal maximum to the Bachmann campaign during the last quarter. Included in that group are: David and Muriel Arnold from Winona, Elizabeth Driscoll, a homemaker from St. Paul, Minneapolis real estate investor Scott Weber, Duluth retiree Orlando Fladmark, Preston farmer Matt Gulbrandson, and Marine on St. Croix business owner Vern Larson.

Minnesotans accounted for more than $104,000 in Bachmann donations during the third fundraising quarter. Only California, with nearly $163,000, checked in with more Bachmann contributions.