WASHINGTON — More than 10 years after her first run for public office, Michele Bachmann has used her newly released memoir to reflect — and reintroduce herself to a volatile Republican electorate that’s yet to settle on a presidential candidate.

Bachmann’s autobiography, “Core of Conviction,” reads like a 200-page campaign speech, made up of equal parts personal introduction, political platform and Democrat-bashing. Bachmann describes her political career as that of an outsider, defined by what she sees as the political betrayal of those whom she thought shared her principles, from Jimmy Carter in the 1970s to Republicans in the Minnesota Legislature and Congress.

In her book, the Minnesota congresswoman describes the events that helped shape her conservative ideology and drove her into politics. The last quarter of the 203-page book memoir, on sale today, discusses her emergence on the national stage, first as a candidate for Congress, then an outspoken conservative back-bencher and, finally, a presidential candidate. 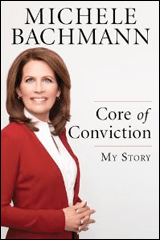 The memoir doesn’t break any new ground for long-time Bachmann observers, but it provides plenty of red meat for supporters of her presidential campaign, and will serve as a simple introduction for potential supporters going forward.

Bachmann has spent much of the last three months campaigning for the Republican presidential nomination in her home state of Iowa, which she lauds — either as a proud former resident, a pandering politician or both — throughout the book. Take, for example, Bachmann’s description of the thoughts that went through her head when, at the age of 12, her family moved to Minnesota:

“I don’t want to leave Iowa. I love living in Iowa. Iowa is home — everything I know. It’s family, friends, church. A happy place. A wonderful place. I never want to be anywhere else. And when I die, I want to be buried in the Garden of Memories Cemetery, alongside my grandparents. We can’t go to some faraway land with no relatives nearby.”

Perhaps the only thing she praises more highly is her husband, Marcus, whom she met in her first year of college and married two years later. The book details the couple’s personal and professional growth together, from the way Marcus Bachmann’s work toward becoming a religious counselor temporarily derailed Michele’s tax law studies to a painful miscarriage that solidified Michele Bachmann’s pro-life views.

In happier times, the pair worked for Jimmy Carter’s presidential campaign and travelled to Washington to attend his inaugural, but Carter became the first politician to betray Bachmann, pushing a liberal economic and energy agenda that, compounded with what she described as his helpless foreign policies, led her to the realization that she was more conservative than the party she supported.

Her reading list
In the late 1970s her reading list included seminal works from conservative economists like Ludwig von Mises and Friedrich Hayek and women like Phyllis Schlafly who bucked the growing feminist movement. Exposed to a new conservative way of thinking and turned off by President Carter, the Bachmanns became Republicans and “enthusiastically voted for [Ronald] Reagan in 1980,” she wrote.

The Bachmanns spent the next 20 years raising their children (the five biological Bachmanns and their 23 foster children), and the homework they brought home from school would soon inspire Michele Bachmann to enter politics. Bachmann despised by the top-down approach the federal government took when it passed its Goals 2000 agenda, and was further angered by the Profiles in Learning standards Minnesota adopted in the late 1990s.

In her first run for office, Bachmann and four other political newcomers ran for local school board in 1999 and lost. When she went to a Republican state senate district convention the next year, she says she submitted her name for nomination on whim. She won the nomination, the subsequent primary and the general election and went to St. Paul as a state senator the next year.

There, Bachmann felt betrayed again. Her fellow Republicans “passively accepted” the DFL’s domination of the Legislature and were less conservative in their lawmaking than they were in their campaigning.

“I was a fiscal and social conservative serving in an ultraliberal-dominated, Democratic-controlled state senate,” she wrote. “Not all Republicans wanted to fight and even fewer were willing to take on issues that seemed ‘messy.’”

Bachmann said she was one of the few within her own party who stood on her convictions the entire time — at one point, she fashions herself as a conservative Paul Wellstone.

Bachmann would serve in St. Paul for five years before winning a seat in the U.S. House in 2006, a year that saw Democrats win control of Congress. Bachmann, again, sees herself as a conviction-oriented outsider among those in her party.

“Americans had the feeling that the Republicans then ruling Congress had grown smug and complacent,” she wrote. “What had been rejected in that election was a bad brew of GOP incompetence, carelessness and a dash of corruption.”

Bachmann’s party would let her down again, this time in the fall of 2008, when Republican leadership backed the $700 billion Troubled Assets Relief Program meant to stabilize a disintegrating economy. She accused President George W. Bush of “embracing a kind of bailout socialism” and saw House leadership and her presidential candidate, Sen. John McCain, do the same. Bachmann, the stalwart conservative, resisted, and voted against the bailout and the economic stimulation measures pushed by new President Barack Obama.

Subtle reminders
The passage of Obama’s landmark health care reform package and actions from the National Labor Relations Board spurred Bachmann’s entry into the presidential contest. While only the last chapter of the memoir is devoted to expressly discussing her presidential campaign, Bachmann dropped subtle reminders of it throughout the book, touching on topics that have arisen since she entered the fray in June.

She briefly mentions her migraines, which caused a small firestorm in July; the $0.75 cigarette tax she voted for in 2005, which Tim Pawlenty tried to use against her in the lead-up to the Iowa straw poll; and the Massachusetts health care law enacted under presidential candidate Mitt Romney, which his Republican opponents have sought to link to Obama’s heath care law during this campaign.

In the book’s final pages, Bachmann defined herself as a national security, economic and social conservative who would use the political might of the Tea Party movement to change the country as president.

“And so I will drive a freedom-and-prosperity train from all parts of the nation to Washington. I will call it the Liberty Express,” she writes on the book’s last page. “Together we can do this. We can come together and stick together as we renew our nation.”