WASHINGTON — In the latest installment of the highly politicized maneuverings to get a payroll tax cut extension through Congress before the end of the year, Democrats used Rep. Tim Walz’s bill to ban congressional trading using non-public information in a sly political move Tuesday night.

Democrats included Walz’s STOCK Act in their alternative payroll tax cut plan to the one proposed by Republicans and considered by the House on Tuesday. Under the rules of debate for the Republican bill, the House was required to act on the Democrats’ plan first, which meant forcing a vote on the popular STOCK Act.

The Democrats’ plan, which in congressional parlance is called the “motion to recommit,” a last chance for the minority party to change legislation wholesale before the House considers a bill for final passage, was never going to pass. It was instead a shrewd political move by the Democrats to force Republicans to vote down a very popular piece of legislation en route to passing a payroll tax cut plan that few Democrats support. 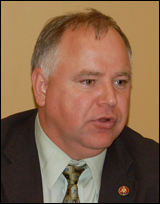 Indeed, no Republican voted for the motion to recommit, which also included a millionaire surtax meant to pay for the extension of the payroll tax cut, and it failed, 183-244.

The stand-alone STOCK Act has 222 co-sponsors, including more than 70 Republicans, more than enough to pass the House. The House Financial Services Committee Chairman, Spencer Baucus, had promised to try moving the bill through his committee, but Majority Leader Eric Cantor shut down his plan last week.

The Republican’s payroll tax cut extension eventually passed. Walz was one of only 10 Democrats to vote for the bill (he also voted in favor of the motion to recommit). The rest of the delegation voted with their party (except for the campaigning Michele Bachmann, who was not in town to vote).

The bill combined an extension of the payroll tax cut and certain unemployment benefits with a series of measures favored by conservatives, including one speeding up a final decision on the controversial Keystone XL pipeline. The Senate, controlled by Democrats, is likely to vote down the bill, and even it passes, President Obama said Tuesday he would veto it.