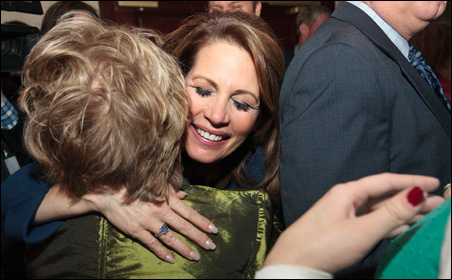 WEST DES MOINES, Iowa — Tuesday afternoon, Michele Bachmann envisioned her race for the White House culminating in her inauguration on the West Front of the U.S. Capitol, a bill repealing President Barack Obama’s heath care reform law waiting for her signature inside.

It ended instead in the ballroom of a West Des Moines Marriott, less than a day after voters handed her a sixth place finish in the Iowa caucuses.

Bachmann dropped out of the race for the Republican presidential nomination on Wednesday, saying she couldn’t see a path to victory after garnering the support of only 5 percent of the Iowa voters she had courted since mid-June.

“Last night the people of Iowa spoke with a very clear voice, so I have decided to stand aside,” she said.

Bachmann did not endorse another candidate and ignored all questions from the media on the walk back to her campaign bus. When asked about Bachmann’s future plans, including whether she would run for re-election in Minnesota, spokeswoman Alice Stewart said no decisions had been made.

Bachmann decided to end her bid early Wednesday morning, Stewart said, after spending Tuesday night thinking and praying about her campaign. Only her family and a few senior staffers were involved in the discussions.

Bachmann called the other Republican challengers on Tuesday night to congratulate them on their performances in the caucuses, Stewart said.

“She likes all of them. Certainly politically she doesn’t agree with all of them, but ultimately she will support who the party nominates,” she said.

Stewart said the campaign is in good shape financially. Bachmann, a prolific fundraiser, raised $4.1 million during the July-September fundraising quarter. She had $1.5 million in cash on hand in October and $550,000 in debt. Fourth quarter financial reports are due to the Federal Election Commission this month.

Bachmann had predicated a successful presidential bid on a strong showing in the Iowa caucuses, planning to ride the momentum through other early voting states. She intended to bring her campaign to South Carolina immediately on Wednesday, even releasing a schedule of campaign events there this weekend.

Her Iowa staffers said Tuesday night that she would continue her campaign, citing a strong on-the-ground organization in South Carolina. Speaking with reporters after Bachmann’s speech last night, Iowa chairman Brad Zaun insisted she would travel to the state on Wednesday, but her events there were canceled this morning.

Bachmann said she was inspired to run for president as early as 2010, when Congress passed President Obama’s landmark health care reform legislation. Repealing the law was a cornerstone of Bachmann’s campaign.

“I knew that it was my obligation to ensure that President Obama’s program of socialized medicine was stopped before it became fully implemented,” she said. “Obamacare represents the largest expansion of entitlement spending in our country’s history. It has now become the playground of left wing social engineering.”

She entered the presidential race last June, dramatically announcing during a nationally televised debate that she had filed paperwork to run. She formally kicked off her campaign in her hometown of Waterloo, Iowa, later that month.

The high point of Bachmann’s campaign came in August, when she won the Iowa Straw Poll, knocking fellow Minnesotan Tim Pawlenty out of the race. But on the same day as the straw poll, Texas Gov. Rick Perry entered the race, energizing conservatives and taking support away from Bachmann. She becomes the first candidate to win the straw poll and lose the caucuses.

(Perry, meanwhile, finished fifth in the caucuses. He canceled scheduled appearances in South Carolina and said Wednesday night that he is reassessing his campaign.)

Before the straw poll, surveys of Iowa voters usually put Bachmann’s support in the 20 percent range. It fell swiftly afterwards, and she was polling in the low teens or high single digits in the month leading up to Tuesday’s caucuses. Bachmann never gained a foothold in any other early voting states, even though she had a leadership team on the ground in South Carolina.

By the end of her campaign, Bachmann was forced to deal with embarrassing and high-profile staff defections, including her state chairman Kent Sorenson. A political director defended Sorenson and soon left the campaign, and the news eclipsed the completion of Bachmann’s much-hyped 99-county tour of the state.

Bachmann was perhaps the first candidate to receive a boost from conservative voters looking for a more ideological alternative to long-time front-runner Mitt Romney. Perry eventually faded, and candidates Herman Cain, Newt Gingrich and Ron Paul each saw brief surges in the polls. Rick Santorum, a former Pennsylvania senator who was the only candidate to spend more time in Iowa than Bachmann, saw a late and robust surge, coming within 8 votes of winning the caucuses Tuesday night.

Bachmann vowed to continue fighting for the conservative policies she campaigned on, even as she leaves the national stage and leaves her political future up in the air.

“While a congresswoman by title, a politician I never have been nor have I ever hoped to be,” she said.

Bachmann: ‘I have decided to stand aside’