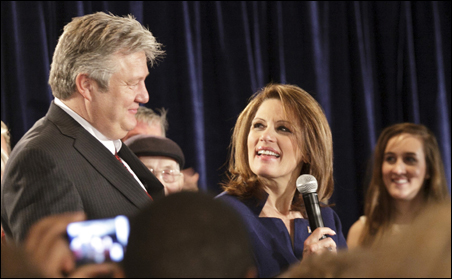 DES MOINES, Iowa — Michele Bachmann has reportedly cancelled her string of campaign stops in South Carolina and will hold a 10 a.m. press conference in Des Moines.

Bachmann finished a distant sixth in last night’s Iowa caucuses, a disappointing finish for a native Iowan who had staked the prospects of her presidential campaign on a strong showing in the state. During the last days of campaigning, she repeatedly told reporters that she would travel to South Carolina despite the Iowa caucus results and in a speech to supporters last night, she indicated she would continue her presidential bid.

“There are many more chapters to be written in our party’s path to the nomination,” she said.