WASHINGTON — In a rare showing of bipartisanship, nearly every Minnesotan in the U.S. House of Representatives came out against the Stop Online Piracy Act on Wednesday, the same day website “blackouts” swept across the Internet protesting the legislation.

Minnesota Sens. Amy Klobuchar and Al Franken support the Senate version of the controversial bill, the PROTECT IP Act. Both will continue to support the legislation despite the online protests, but spokesmen for Klobuchar and Franken said the lawmakers want to see a compromise passed rather than the bill in its current form.

“[Sen. Klobuchar] believes we need to address concerns being raised today and work out a compromise that balances free exchange on the Internet with stopping foreign piracy that hurts our economy,” said her spokesman, Linden Zakula.

“Sen. Franken has heard the concerns that many Minnesotans have voiced over the past few days about the PROTECT IP Act, and he believes we need to reach a compromise that will both keep the Internet free and open and protect American jobs,” Franken spokesman Ed Shelleby said.

Under fire
SOPA and PIPA have come under fire for too aggressively looking to solve the problem of online piracy from foreign websites. The bills, if passed, would allow copyright holders to ask the government to take action against sites that illegally distribute their copyrighted material. The government could do so by barring advertising or payment companies from working with such sites, requiring search engines from removing them from its results pages, or even asking Internet providers to cut off access to the sites.

Franken was asked about the legislation during an appearance on Minnesota Public Radio last week, driving home the point that PIPA only “targets foreign websites whose sole purpose is to rip people off.”

“There are software programmers here in Minnesota,” Franken said, “and if their software is ripped off, that’s their intellectual property, and part of these websites do that.”

PIPA is tentatively scheduled for a Senate vote as early as next week and a House committee could vote on SOPA sometime in February. On Saturday, the Obama administration said it would not support “legislation that reduces freedom of expression, increases cybersecurity risk, or undermines the dynamic, innovative global Internet.”

The two pieces of legislation have been controversial for a while in certain tech circles, with web companies and users warning the bills are overly broad and could lead to the shuttering of websites that simply use copyrighted material without permission. The return of Congress from its holiday recess and the impending Senate vote on PIPA inspired the blackout protests on Wednesday, and thousands of web sites completely (Wikipedia) or partially (Google) blacked out their pages to raise awareness of SOPA, most encouraging users to contact their lawmakers and protest the bill. Wikipedia said 162 million visitors saw the warning message it had posted on its home page.

In previewing the blackout for the New York Times, Columbia University professor Tim Wu called the blackouts “the first real test of the political strength of the Web, and regardless of how things go, they are no longer a pushover.

“The Web taking a stand against one of the most powerful lobbyers and seeming to get somewhere is definitely a first,” he said.

By the afternoon Wednesday, SOPA and PIPA had seen their support erode. At least 10 lawmakers pulled their co-sponsorships from the legislation and scores more announced for the first time that they were against the bills.

Delegation issues statements
Members of the Minnesota delegation one by one released statements against the bills, starting with Democrat Keith Ellison, who went so far as to black out his campaign website in solidarity with the rest of the virtual protesters. 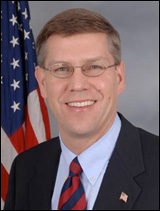 By the afternoon, Democrat Betty McCollum had come out against the bill and Republicans John Kline, Erik Paulsen and Chip Cravaack had posted messages to Facebook and Twitter announcing their opposition. Spokespeople for Reps. Tim Walz, a Democrat, and Michele Bachmann, a Republican, said they would also oppose the plan, and Rep. Collin Peterson’s office said he was “leaning no.”

The prevailing attitude among them was that while combating copyright was a noble goal, SOPA went too far in trying to do so.

“I believe copyright infringement and piracy should be prosecuted to the full extent that the law affords,” Paulsen said in a statement, “but I have deep concerns about the effects of SOPA and therefore cannot support it in its current form.”

Paulsen’s office posted the statement on his Facebook page. By Thursday morning, 177 users had liked it and there were 71 comments, by far the most of any recent update.