WASHINGTON — The House of Representatives passed Rep. Tim Walz’s STOCK Act 417-2 on Thursday, but for such a significant legislative victory and the strong bipartisan the bill inspired, no one seemed to be particularly excited about it.

The House-passed bill, which bans lawmakers and staffers from trading stock based on non-public information, looks much different than the one Walz introduced to little fanfare last spring. The underlying purpose is intact, but in the legislative hustle to pass the highly popular bill, introduced to the public in a “60 Minutes” segment last fall, new sections were quickly added and, in some cases, even more quickly taken away. Supporters worry that the end product is not as strong as it could be.

The U.S. Senate passed its version of the STOCK Act last week, inserting provisions that apply the bill to both the executive branch and firms specializing in “political intelligence,” the gleaning of insider tips from lawmakers and staff and using them for profit. Good government advocates vigorously supported the bill, which in certain ways was stronger and more expansive than the one Walz originally proposed.

But House leadership stripped the political intelligence provision, among others, and added a section that would ban lawmakers from getting a head start on initial public offerings of stock (it’s been dubbed the “Nancy Pelosi provision” after the “60 Minutes” report alleged she wrongfully benefitted from one such IPO in 2008. Pelosi, the House Democratic leader, said on Twitter Wednesday that she supports the provision). The House voted on the legislation on Thursday under procedural rules preventing lawmakers from amending the bill, a point not lost on the bill’s original backers.

Walz and STOCK Act co-sponsor Louise Slaughter said they were disappointed more by the process than the bill it produced, even if they contended it’s weaker than it could be. In a press conference Wednesday, the pair hit House Majority Leader Eric Cantor for filing the bill “in the dark of night” and closing off the amendment process, which Slaughter said could have lead to the reinstatement of the political intelligence provision. They insisted that a conference committee convene to iron out any differences between the two bills once the House approved it is version on Thursday, which, with nearly 300 co-sponsors, is almost a certainty.

But frustrations aside, Walz said he was happy to see the legislation nearing passage, and he offered an olive branch to Cantor.

“I will always come to the conclusion that my bill was stronger, but that’s not the way it works around here,” Walz said. “You’ve got to be able to get people together. I think the leader’s making a good faith effort.”

Political Intelligence
The Senate version of the STOCK Act would subject political intelligence consultants to registration and reporting standards similar to those that apply to federal lobbyists to lobbyists.

The Senate passed the amendment on a 60-39 vote (both Minnesota senators voted yes), but against the wishes of both Majority Leader Harry Reid and Minority Leader Mitch McConnell, who opposed it.

After the Senate passed its bill (by a 96-3 vote), lawmakers and outside lobbying groups raised concerns that the political intelligence provision was too broad and could risk ensnaring innocent outside parties who might be privy to otherwise non-public information, like journalists and even groups listening to lawmakers’ speeches, opening them up to harsh penalties if they acted on the information they received. 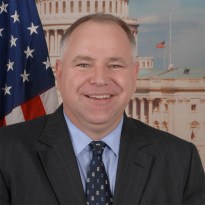 “This provision was extremely broad and its impact would have raised more questions than it answered,” Cantor spokeswoman Laena Fallon said. “Worse, the unintended consequences of the provision could have affected the first amendment rights of everyone participating in local Rotaries to national media conglomerates.”

After Cantor posted his bill online, without the political intelligence provision, the blowback was swift.

“If Congress delays action, the political intelligence industry will stay in the shadows, just the way Wall Street likes it,” Grassley, a Republican, said in a statement.

Government watchdog group Citizens for Responsibility and Ethics in Washington called the bill a “sham” and accused Cantor of “trying to take credit for finally responding to an issue that has outraged Americans, while behind closed doors he has taken the side of Wall Street and neutered the tough Senate bill.”

In the end, the House bill requires a study on the real impact of political intelligence firms, which Walz said could spur further legislation in the future.

A small step ‘in the right direction’
But despite its bipartisan appeal, and the blessing of its lead sponsors, the STOCK Act remains a political pawn in the larger game of right versus left.

White House spokesman Jay Carney started his Wednesday press briefing by admonishing Republicans, saying he was “shocked to see that even this simple bill … that would ensure that everyone plays by the rules is being weakened, behind closed doors, by House Republicans, who seem to be caving to pressure from Wall Street lobbyists.” By Wednesday evening, the Democratic Congressional Campaign Committee had encouraged supporters to sign a petition insisting the bill’s strongest provisions are reinstated before Thursday’s vote.

Cantor called Walz to discuss the STOCK Act on Wednesday, and by all accounts, the pair had a constructive conversation. Walz said he’ll still push for a conference committee to strengthen the bill to his liking, but given Congressional leadership’s bipartisan opposition, he thinks it’s unlikely to reinstate the political intelligence restrictions. He’s at peace with seeing the STOCK Act enacted in its current form, which in some ways (the IPO provision and one requiring lawmakers to disclose the details of their mortgages) add to Walz’s original bill.

“We certainly took a step,” Walz said. “Some would argue a small step, but that’s fine. It’s a step in the right direction.”

After one last battle, House passes the STOCK Act