WASHINGTON — Your grandma’s tater tot hot dish this was not — and don’t you dare call it a casserole.

Sen. Al Franken and Rep. Chip Cravaack were named the co-winners of the Minnesota congressional delegation’s second-annual “hot dish off” on Wednesday, which attracted dishes from eight of the state’s 10 members of Congress. Cravaack’s dish was a cheesy, egg-y concoction and Franken’s consisted of wild rice and cream of mushroom soup (Franken’s office organized the event and posted complete recipes here). Former U.S. Rep. Vin Weber and the House Chaplain, the Rev. Patrick Conroy, presided as judges.

The competing members worked to get Minnesota staples into their rather elaborate dishes. Rep. Tim Walz’s hot dish was Spam-based, since his 1st District is home to the Austin, Minn. facility that produces it. Rep. Erik Paulsen made a hot dish using pheasant that he shot personally. 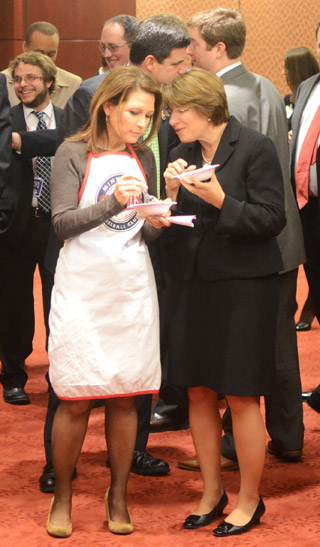 Sen. Amy Klobuchar, who won last year’s contest, said her dish was inspired by Ted the Turkey, the Minnesota bird that was set to be “pardoned” by President Obama at Thanksgiving before it literally flew the coup and attacked onlookers at a send-off event at the State Capitol. The turkey was processed and donated to a food shelf instead. Rep. Michele Bachmann joked that her dish was named after the St. Croix River Bridge project that Congress approved last week.

The lawmakers made some good-natured jokes at the others’ expense. Franken, alluding to the 2008 recount after his U.S. Senate race, said he was hoping there wouldn’t be a tie at the top because Republicans would spend millions of dollars in legal fees trying to figure out who won. Walz, a Democrat, feigned pride that Paulsen, a Republican, had to come to his district to hunt the pheasant for his hot dish.

In the end, though, the event was meant to highlight bipartisanship. The lawmakers stood together joking as Weber and Conroy judged the dishes, and the assembled crowd of staffers and journalists groaned when Franken insisted the judges award eight first-place awards instead of trying to pick a favorite.

And as they walked out of the room, Klobuchar and Bachmann wished each other good luck in next year’s competition, even as their two parties hope to unseat the other in November’s elections. 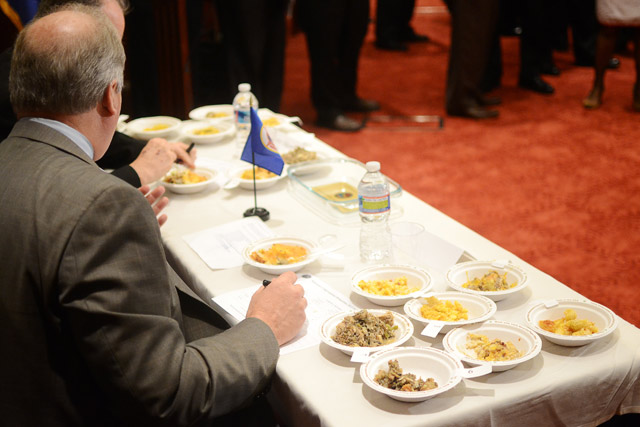