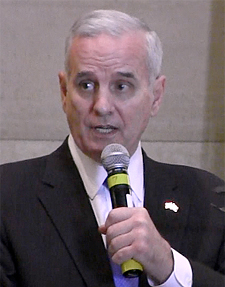 WASHINGTON — Gov. Mark Dayton and his health and human services chief beat back congressional complaints over the state’s Medicaid spending on Wednesday, arguing his administration should be giving credit — not investigated — for reforming the system.

A U.S. House panel held a hearing Wednesday based around a $30 million gift to the state from UCare, one of four HMOs that administer Medicaid in Minnesota, the ownership of which was disputed by the state and the feds. Lucinda Jesson, the Commissioner of the Minnesota Human Services Department, was called to defend the state’s handling of the money.

The hearing drew testimony and comment from a slew of Minnesota officials, including lawmakers like Keith Ellison, Betty McCollum and Michele Bachmann. A key witness was former Minnesota Hospital Association counsel David Feinwachs, who said he was fired for raising questions about the state’s Medicaid oversight.

Bachmann compared the controversy to a grocery store clerk who charges too much for a cart of food, but refuses to give the receipt to a customer.

“It appears that maybe a game as been played, that [managed care organizations] can charge anything they want for whatever they want,” she said.

The UCare gift, a $30 million donation to the state in March 2011, caused bipartisan consternation from members of the committee.

When UCare told state officials about the money, they considered it to be a “bona fide donation,” Jesson said, and intended to put the full amount in the Minnesota general fund. But the federal government cried foul, calling the “donation” a refund for overpayments to UCare and demanding half of it. On Monday, two days before the congressional hearing, Minnesota agreed.

Lawmakers suggested Minnesota officials were working to keep the money for the state, pointing to an email in which Jesson instructed a staffer to call the money a donation in public.

“In order to have a good chance of keeping all this money, it must be characterized as a donation,” she wrote. “If a refund, feds clearly get half … I thought we were going to handle this through phone calls.”

Rep. Trey Gowdy, R-S.C., accused the state of trying to “keep as much of other people’s money as you possibly can even if it means recharacterizing something.”

“This was a very unique situation and one which we didn’t have a playbook for,” Jesson said. “There wasn’t a clear answer.”

Jesson didn’t find any relief from the Democrats on the committee. Rep. Dennis Kucinich, for one, said that he had “questions about how you got to the point of believing and acting to keep all of the UCare funds for Minnesota when many believed at the time and you now concede that the funds needed to be divided with the federal government.”

Part of a larger problem?

More broadly, lawmakers accused Minnesota officials of scheming to get more Medicaid funds from the federal government than it was owed, primarily by overpaying HMOs through Medicaid reimbursements while underpaying them for plans that use just state money.

A congressional investigation, spearheaded by Iowa Republican Sen. Chuck Grassley, accused the state of spending less of its money on in-state health care plans while over-charging the federal government, through Medicaid reimbursements, to make up the difference. The state could end up owing the federal government “hundreds of millions of dollars” for such a system, according to a committee report.

Minnesota spent about $7 billion on Medicaid in 2009. More than 60 percent of that came from the federal government.

“This appears to be another example of the old game of states pushing the bounds to maximize federal dollars received while minimizing state dollars spent,” Grassley told the committee.

Feinwachs, the former general counsel of the Minnesota Hospital Association, told the committee that the problem dated back to 2003, during the Tim Pawlenty administration, and continues today. He said he raised the issue with his supervisors in 2010, and he said he was fired a short time later.

“It does appear from what has occurred in Minnesota that some public employees and our HMOs were, in fact, collaborating in the conduct we are questioning today,” Feinwachs said.

Minnesota officials said the charges are overblown. Gov. Mark Dayton, speaking at a St. Paul press conference, called them “just disgusting. It’s totally uncalled-for, totally unjustified.” He said Jesson should be applauded, not investigated, for bringing down Medicaid spending in the state. 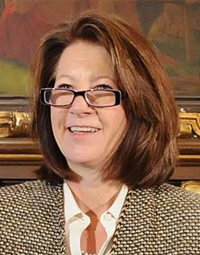 Jesson said the Dayton administration had taken a proactive approach to providing more oversight on Medicaid spending, by calling for more audits of the state’s HMOs, instituting a competitive bidding process and ask the HMOs — all non-profits under Minnesota law — to cap their profits to 1 percent of their operating margins. Jesson said the reforms would end up saving $600 million.

“Minnesota has long been a leader in how managed care plans serve our Medicaid enrollees,” she said. “But changes need to be made in the way we do business now and in the future. We have made an unprecedented number of reforms in purchasing and accountability in just the past 15 months.”

State lawmakers in Minnesota on Wednesday resisted taking aim at specific officials for implementing the flawed accounting, but admitted there’s a problem. They criticized the federal and state systems for allowing the shoddy transactions to take place, but said Minnesota was simply working within the established public health care framework.

They also said seeking more federal aid is something that every state does.

“I’m sure every state is trying to maximize federal dollars,” said Sen. John Marty, DFL-Roseville. “That doesn’t mean what was done was appropriate or anything like that, and so the federal government understandably wants to check in on it.”

Sen. Sean Nienow, R-Cambridge, who had called on Congress to hold the hearings, said he wanted to uncover the root of the obvious, but mysterious problem through the audits. A group of “proponents” for examining the HMOs came to Nienow with a “suite” of bills last year, he said.

“It wasn’t just that it didn’t smell right,” Nienow said. “You could see the smoke throughout the Capitol, figuratively, and it got to the point where we needed to find out: Is the house on fire or not? Because I could smell it, I could see it, but where’s it coming from?”

Despite the condemnation, the legislators aren’t very concerned the feds will find any wrongdoing.

“I don’t believe they’re going to find that it was fraud,” Abeler said. “I’ll be astonished if they come back with that.”

But their ideas for a solution to the problems fall along partisan lines. Abeler said the feds should look at the sweeping reforms propagated by Minnesota’s Republican legislative majority last session as a template for the nation. Marty has called for ending contracts with the HMOs and returning the to government-led care systems that were in place before them.

The charges against Minnesota are part of a larger problem, Republicans warned, citing a 2010 Government Accountability Office report that warned “[the federal government] cannot ensure that states’ managed care rates are appropriate, which places billions of federal and state dollars at risk for misspending.”

“This is not just a Minnesota problem, this appears to be a problem around the country,” Bachmann said in her testimony. She said she will introduce a bill requiring third-party audits of managed care financial statements and state contracts with them.

Republicans said this was especially prudent given the way President Obama’s health care reform law expands Medicaid, warning that fraud will become more common as 20 million people become eligible for its coverage and the federal government begins reimbursing states for covering them.

A lawmaker asked each of those testifing to rate the level of Medicaid fraud that persists in their states. Both testified it was potentially widespread and rampant.

When the question was posed to Feinwachs, he responded: “Not to be outdone, but Minnesota’s fraud is more massive and more clever than yours.”

By James Nord and Devin Henry