PORTSMOUTH, Va. — Flanked by a Virginia flag and two “Romney: Believe in America” signs, Minnesota Republican Michele Bachmann threw her weight behind the presumptive Republican presidential nominee on Thursday, saying she was “[lending] my voice and my endorsement to Mitt Romney to take the country back.”

“This isn’t personal; this is about having a performance review after three-and-a-half years,” she said. “There is no question in my mind Americans will go to the polls and say, ‘Mr. President, you’re fired,’ and instead, we will soundly stand with someone who believes in America.”

Bachmann and Romney appeared together in this southeastern Virginia town, on the Chesapeake Bay, campaigning under a hot sun and blue skies at Clifton Diving Corp., a manufacturer of scuba diving equipment. Several hundred people showed up for the campaign stop, where Romney’s opening acts were Bachmann and Virginia Gov. (and a potential member of the Romney vice presidential short list) Bob McDonnell.

Bachmann got big cheers and had a good amount of support in the crowd. One woman, Frances Bouton of Suffolk, came carrying a sign urging the selection of Bachmann for VP. Another, Ann Preston of Chesapeake Va., estimated that she was the preferred presidential candidate of many of the conservatives in the crowd.

“It was very exciting when everyone heard Michele was here.” she said. “Everybody just went, ‘Wow’ — everybody was really happy.”

Bachmann is the latest in a string of prominent Minnesotans to back the former Massachusetts governor, including U.S. Rep. Erik Paulsen and former Gov. Tim Pawlenty. Her appeal lies with a group of voters with whom Romney has struggled: the most conservative wing of the Republican Party and evangelical Christians, who might still be uncomfortable with Romney’s Mormon religion.

The last, best candidate for those voters, Rick Santorum, dropped out of the race in early April. Romney’s inevitability as the party’s nominee had been assumed even before then.

But Bachmann has never been a diehard Romney fan. Running for the Republican nomination herself, Bachmann called Romney’s Massachusetts health care reform package a deal breaker for conservatives and said it imperiled him in a general election contest against Romney.

“He cannot beat Obama because his policy is the basis for Obamacare,” she said the night before the Iowa caucuses. “You can’t have a candidate who has given the blueprint for Obamacare.”

Bachmann had no such criticism today. She said she managed to pull Romney further to the right on the issue of Obama’s health care reform law (he started off promising to offer vouchers for the program; on Thursday he said, “the first and easiest program I will eliminate is Obamacare”), and he was now worthy of her endorsement. 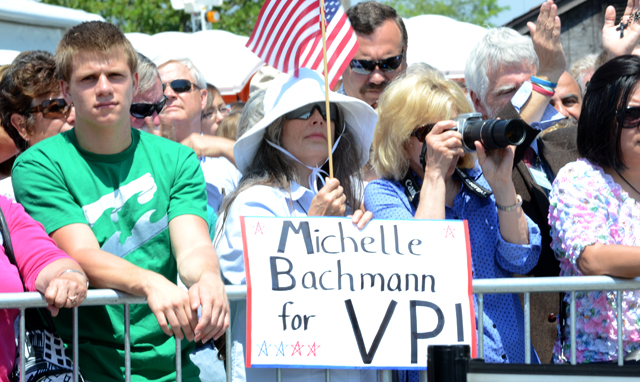 After Bachmann dropped out of the presidential race in January, she pushed off this endorsement for months. She met with Romney privately in February, before the Minnesota caucuses, but denied that she would endorse Romney any time soon. Since then, she’s hinted at an endorsement, and said last week that one would come “in due time.”

That time, apparently, was Thursday.

“I’m thoroughly convinced that Barack Obama should not have a second term as president, so I’m happy to lend my name and my support to Gov. Romney’s candidacy, and I truly believe he will be the next president of the United States,” Bachmann said.

Romney give a Virginia-focused speech

Romney’s stump speech was a tailored pitch to Virginia voters. He blamed Obama for failing to capitalize on the state’s natural energy reserves and calling for more investments in the armed services, one of the largest constituencies in the state.

“The idea that you have powerful energy right off your coast, that you could be creating good jobs right here in Virginia and providing resources at a reasonable cost to the people of America, that’s been lost by a president who has said, ‘No,’ ” he said. “When I’m president, I’ll put Virginians to work getting energy from above and below the ground.”

Romney, speaking just miles from the shipbuilding facilities that dominate the coast off Norfolk, said he’d bolster the nation’s military by buying more new ships for the Navy and new aircraft for the Air Force.

At the same time, he said he’d work to balance the budget by eliminating federal programs cutting spending.

“This president says he want to move us forward,” Romney said. “If the last three years are his definition of forward, I hate to see what backward is.”

Virginia is an especially important battleground state and will receive significantly more attention from both Romney and President Obama as the general election drags on. One of Obama’s formal campaign kick-off rallies this Saturday is in the commonwealth’s capital of Richmond.

Obama won the state by 6 points in 2008. A Public Policy Polling survey of Virginia voters showed him leading Romney by 8 percent.

The Democratic National Committee was ready for the Romney-McDonnell-Bachmann appearance here, releasing a web video ahead of the campaign stop that charges the three are actively “turning back the clock on women’s health.”

The video mashed together clips of the three discussing efforts to limit abortions, defund Planned Parenthood and roll back the Roe v. Wade Supreme Court decision. The spot was red meat for liberals and an extension of the “war on women” narrative Democrats are trying to craft as the general election begins.

“Minnesotans know Michele Bachmann best, and have seen the impact of her extreme positions and outlandish statements,” the memo read. “Now we know that Mitt Romney officially stands with her — and against the best interests of middle-class families in our state.”