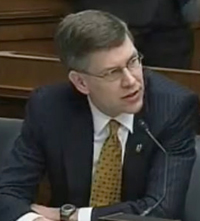 WASHINGTON — Rep. Erik Paulsen’s bill repealing a medical device tax makes its final stop before a potential floor vote on Wednesday, when the House Rules Committee will look at a beefed-up version of the bill.

The bill’s foundation is Paulsen’s chief legislative priority, a provision repealing a 2.3 percent excise tax on medical device sales instituted as part of the Affordable Care Act and set to take affect next year. The bill contains two other ACA-related measures supported by House Republicans, and a crucial provision meant to pay for the legislation’s $37 billion price tag: a reduction in federal health insurance subsidies at the heart of the 2010 health care overhaul.

Under the Affordable Care Act, individuals who qualify to receive federal subsidies to purchase health coverage from state insurance exchanges need to pay back a certain amount of the subsidy if they don’t end up spending it all. The reimbursement amount is determined by an individuals’ income level, but there are circumstances in which individuals can keep at least some of the overpayments.

Under the ACA as passed, those who make 400 percent of the federal poverty level or less would only have needed to refund $250 (or $400 for families) of the subsidy overpayment; that figure has been reduced twice, and the plan now attached to Paulsen’s bill would require any eligible recipients at any income level to refund the full overpayment amount (in legislative parlance, the government is said to “recapture” the overpayments).

The plan would save $43.9 billion over the next 10 years, according to the Joint Committee on Taxation. That makes up for the $29 billion cost of the medical device tax repeal and the roughly $8 billion cost of two pieces of unrelated legislation added to Paulsen’s bill before it heads the Rules Committee.

Democrats on the Ways and Means Committee balked at the cost of the bills when the committee considered them last week. But in the past, they have opposed increasing the recapture amounts as well.

When such a plan was included in the proposed Republican budget resolution for 2013, the committee’s ranking Democrat called it a “tax increase on lower-income and middle-class individuals and families” and warned that changes in a person’s income, employment situation or family size would reduce their subsidy at a time when they need it the most.

“While the ACA requires some repayment in recognition of this income fluctuation, it also recognizes that full repayment may create an unacceptably large and unanticipated burden on families that are struggling to get back on their feet,” Rep. Sandy Levin said in April.

The JTC chief of staff testified at a hearing that recapturing all subsidy overages would prevent 350,000 people from receiving health insurance, further bolstering to their opposition. Committee Democrats unanimously voted against the provision.

Congress has twice voted to recapture more subsidy overpayments, once in 2010 to delay future cuts to Medicare reimbursements to doctors and once last April to eliminate the health care law’s 1099 reporting requirement for businesses.

The Republican-controlled House is expected to pass Paulsen’s bill easily when it comes to the floor later this week. It could hit a snag in the Senate, where Democrats are in the majority and might be wary of stripping provisions from the health care law, President Obama’s signature legislative accomplishment.