WASHINGTON — The Supreme Court’s decision today to uphold President Barack Obama’s health-care reform law means one thing for Congress: It’s full steam ahead for the Republicans’ plan to repeal it.

Such a repeal is likely to fail in the Senate and would certainly meet a veto from Obama. But House Republican leaders committed themselves to a full repeal push after the court’s decision came down, scheduling a vote for July 11. 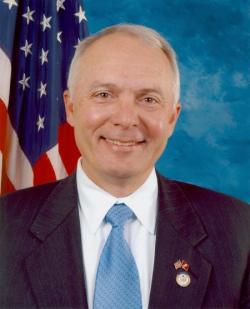 In an interview, Kline said Republicans could look to replace the law with proposals they raised during the initial debate over the legislation in 2009 and 2010, such as allowing small businesses to pool together and provide health insurance to workers, expanding health savings accounts and pushing medical liability reform.

Polling still shows that the Affordable Care Act as a whole is unpopular. A Reuters poll released earlier this week showed 56 percent of respondents oppose the health-care law, but there are popular components as well: 61 percent support allowing people under 26 years old to be covered by their parents’ insurance plans; 82 percent favor the law’s ban on insurance plans that don’t cover pre-existing conditions.

Kline said some provisions could survive a repeal effort, but Congress needs to sweep away the entirety of the Affordable Care Act before restoring popular parts of the law.

“You can’t get those things before you fully repeal Obamacare,” he said.

House Republicans passed an ACA repeal bill in January 2011, at the very onset of the current Congress, but the bill went nowhere in the Senate. In place of a full repeal, they have been working to end certain parts of the law all session long, passing a series of bills meant to carve away at the Affordable Care Act and at times defunding ACA components to pay for other programs.

But except for one major effort — repealing a new tax-reporting requirement for businesses — the Senate and President Obama have not acted on any of the bills, and a full repeal will likely die after the House approves it.

Earlier in June, the House passed an Erik Paulsen-based provision to rescind a $29 billion tax increased on medical-device manufactures, and Paulsen said in an interview Thursday that he is “going to do everything I can to stop that tax.”

He also aimed at the court’s thesis, that the government can tax an individual who fails to acquire health insurance, calling it, “a choice between either paying a massive new tax or higher insurance premiums.”

While Republicans are moving forward with repeal efforts, Minnesota’s Democrats see room to improve and strengthen the law.

Rep. Keith Ellison said he hoped a validated Affordable Care Act will open the door to an expansion of government-subsidized health care in the future. Ellison has long supported a single-payer health-care plan, and said the ACA was a move toward one.

To be sure, Democrats were unable to pass a single-payer plan during the 111th Congress, when they were in the majority in the House and had a nearly filibuster-proof majority in the Senate. But Ellison said the law is a step in the right direction.

In a statement, Sen. Amy Klobuchar praised the court for “putting the law above politics,” and left the door open for reforming the law going forward.

“This law is a beginning, not an end, and I believe that improvements still need to be made,” she said. “Moving forward I will continue to work to ensure the law is implemented in a way that is consistent with Minnesota’s high-quality, efficient health care system and ensure these reforms work for our state.”

Sen. Al Franken said he was happy with the ruling, but he predicted Congress won’t change the law, one way or another, any time soon.

“We have what we have and I like this [law] very, very much,” he said in an interview.

Absent a successful repeal under a Mitt Romney presidency, the next major milestone for the Affordable Care Act comes on Jan. 1, 2014, when the bulk of the law’s remaining provisions take place. By then, employers with 50 or more employees must provide health-care coverage to their workers, insurers can no long ban coverage based on pre-existing conditions or set annual payment caps, state-run insurance exchanges must be operational, and the penalty for not owning health coverage — the crux of the debate before the Supreme Court — kicks in.

Aside from setting up their exchanges, states must now decide how to go about expanding Medicaid eligibility, given that the penalty for failing to do so was overturned by the Supreme Court, University of Minnesota public health professor Jean Abraham said.

If Democrats manage to hold enough clout in Washington to avoid a repeal, they’re unlikely to make major changes to the health-care system until after the ACA has been fully implemented, said Abraham, a former economist for the President’s Council of Economic Advisers.

“Now we’re not going to be speaking about the constitutionality of this law,” she said. “This is the law of the land. Now we’re going to be able to have a discussion in the media about what this really means for people.”