WASHINGTON — With Congress set to recess for the next month, House Republicans are trying to vote on a short-term extension of federal farm programs and funding this week, in lieu of a long-term bill the chamber is unlikely to consider.

The bill would extend current funding for all federal farm and food stamp programs through next September but slightly decrease spending on direct farm subsidies in order to pay for disaster relief funding meant to lessen the impact the current drought.

But as precarious as it was to get a bipartisan five-year farm bill through the House Agriculture Committee, Minnesota Democrat Collin Peterson said it will be harder for Republicans trying to pass the one-year bill this week.

The problem is this: Peterson, the ranking member of the Agriculture Committee, opposes the bill, and said his fellow House Democrats are going to do the same, unless Republicans agree to send the House’s version of the five-year bill to a conference committee with the Senate. At that point, the bills’ differences (on a crop price guarantee program and, more notably, food stamp funding) would be resolved, allowing a clean congressional vote on a five-year farm bill.

Republican House leaders have given no indication they’re willing to take up the five-year bill, given the ideological and regional battles it would start during an election year.

Conservative House Republicans oppose the chamber’s bill because it doesn’t cut enough from the food stamps program, though Peterson, who wrote the bill with Ag Committee Chairman Frank Lucas, said he can get at least 40 Democratic votes for that bill, even as liberal members oppose it because of the food stamp cuts.

But that’s not so for the one-year extension. Peterson said he won’t support a short-term bill unless it leads to progress on the long-term one, and the Democratic chairwoman of the Senate Agriculture Committee, Debbie Stabenow, has said the same. That’s what Peterson told House Republican leadership when they called him over the weekend.

“They boxed themselves into a corner,” he said Monday. “A lot of these members don’t know what they’re getting into. They’re going to get a lot of heat in August,” during the month-long recess Congress that starts this week. During that time, lawmakers in rural districts are likely to hear from farmers hit hard by the nationwide drought.

The Senate passed a nearly $500 billion five-year farm bill in June, and the House Agriculture Committee passed its version on July 11. Both end the program that directly subsidizes farmers while increasing funding to federally backed crop insurance. The major difference between the bills lie in the food stamps section, where the House cut $16.5 billion over 10 years, and the Senate, $4.5 billion.

Political wrangling aside, John Mages, president of the Minnesota Corn Growers Association, said his group would support a one-year extension of current farm law, even if farms would prefer a long-term bill. 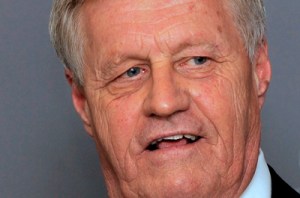 Most farmers have supported Congress’ plan to end direct payments if it meant expanding crop insurance, but Mages said he’d be open to keeping the current system for a year. Current crop insurance coverage is acceptable, at least for Minnesota farmers, though those in more drought-stricken areas of the county might favor a stronger safety net to boost profits in the face of low crop yields.

Even if the House’s one-year bill stumbles this week, lawmakers seem to generally agree to pass an emergency disaster relief bill to help areas struggling with drought conditions. House Speaker John Boehner backed such a plan last week, and Peterson said he could support a stand-alone disaster aid bill, provided it’s paid for.

“I would think as long as they can get something settled, I think an extension would probably be OK,” Mages said. But, “we prefer to see the [long-term] farm bill done this year because … it’s always good to know what the policy would be for the next five years.”

Even if Mages and the corn growers are ambivalent, major national lobbying groups have slammed the House’s one-year plan. Two groups, the American Farmland Trust and the American Farm Bureau Association, came out against the plan within hours of each other Monday morning.

The House Rules Committee is scheduled to take up the one-year bill on Tuesday, setting up a potential vote in the full House later in the week.

Peterson said he has no idea if Republicans have the votes to pass the bill, and he wouldn’t commit to getting the necessary Democratic support unless there is a conference committee agreement.

Breaking from the traditionally bipartisan spirit of the Agriculture Committee, Peterson said Republicans didn’t consult him before introducing the one-year extension on Friday afternoon. That’s to blame for the confusion over the path forward, he said.

“It’s not a good situation. This is what happens when you don’t work together.”