Fresh from Tuesday’s win in a three-way DFL primary, former Congressman Rick Nolan now takes on U.S. Rep. Chip Cravaack in what will be one of the nation’s most contested and closely watched House races.

The DFL wants to regain a seat it held for decades but lost to freshman Cravaack in 2010.

Riding the endorsement of the DFL Party, which mobilized behind him on the airwaves and on the ground in the last few weeks of the campaign, Nolan, with 38.7 percent of the vote, defeated former state Sen. Tarryl Clark (31.5 percent) and former Duluth City Council President Jeff Anderson (29.8). Both conceded defeat Tuesday night.

Nolan, a 68-year-old former congressman, is looking to complete a congressional comeback 30 years in the making. Nolan was first elected to the House in 1974 and represented the 6th District for three terms, serving alongside Jim Oberstar, whose seat Nolan now looks to win.

One prong of his campaign message has been this congressional experience, and another has been his time in business. He ran a sawmill in his post-Congress years, and was active in local politics (he’s the chairman of the planning committee for Mission Township, a small community near his home of Crosby). Most notably, he worked for Gov. Rudy Perpich as head of the Minnesota World Trade Center in the 1980s and 1990s, though his tenure was not without its controversies.

The three DFLers in the primary ran divergent campaigns, though they held views largely similar on the issues. Clark was able to raise and spend more than both of the other two, who relied at the backing of their party (in Nolan’s case) and their roots in to the district (in Anderson’s) to try and sway support.

The DFL endorsed Nolan in May, and most high-ranking Democrats in the state followed suit, including former Vice President Walter Mondale and Oberstar. Clark won the backing of former President Bill Clinton, and Anderson touted several endorsements from local Northland Democrats.

Clark, a veteran of DFL politics who lost a 2010 race against Republican U.S. Rep. Michele Bachmann, put out a campaign ad hitting Nolan’s experience with the World Trade Center during the last weekend of the primary contest, calling into question his management of the group. It was a preview of a likely GOP talking point against Nolan for the general election. In a brief interview just after midnight Wednesday, Clark was conciliatory and vowed to back Nolan’s campaign.

“The issues that join us together are the things that people care about it,” she said.

Anderson, a 35-year-old former Duluth City Council president, tried to cast himself as a homegrown son of the 8th and appealed specifically to Iron Range communities, where he grew up. He did well in those areas,  as in Duluth, and he won St. Louis County with 44.5 percent of the vote.

Anderson said he was “absolutely” backing Nolan’s bid and would work to strengthen his support on the Iron Range — Nolan, he noted throughout the campaign, represented a different area of the state during his first term in Congress.

“He’s going to need help from people like me introducing himself further to people in this district,” Anderson said. “It’s going to be a challenge, but one that I think he can overcome  … considering that two years ago most people hadn’t heard of Chip Cravaack.”

True to the candidates’ words, the DFL Party plans a “unity rally” with all three in Duluth on Wednesday to present a united front against Cravaack. 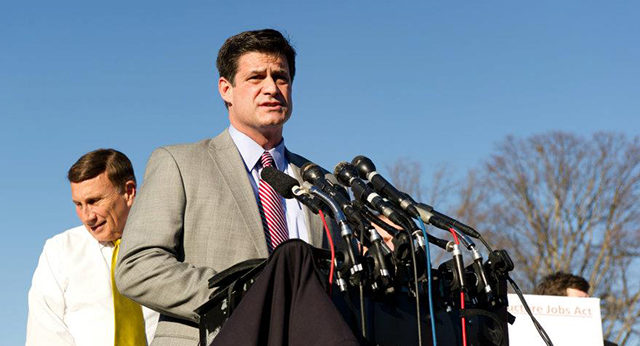 cravaack.house.govRep. Chip Cravaack speaking about the long-term highway bill back in February.

The fall campaign is one that already garnered national attention.

Cravaack took advantage of a Republican wave and defeated longtime Rep. Oberstar in 2010, almost instantly setting himself up as a top target for Democrats this year. He has a campaign kick-off of sorts Thursday, holding events in North Branch and Duluth.

In a statement, Cravaack said he “look[ed] forward to discussing our different visions for the future of our country and the 8th District during the next 83 days. I look forward to a healthy debate on the issues important to Minnesota and the country.

“I will continue to fight to rein in out-of-control spending, reform burdensome job-killing regulations and to improve the economy to bring more jobs to the 8th District.”

Given the 8th’s partisan lean (it’s a traditionally left-of-center district: every successful major statewide Democratic candidate has won it since at least 2004, party operatives noted Tuesday night) and Cravaack’s victory in an election that saw low Democratic turnout nationwide, Democrats view the district as a top pick-up opportunity in the fall.

But Republicans have moved to protect Cravaack, reserving ad time in the Twin Cities media market (as did Democrats) to back his campaign. On Tuesday, the National Republican Congressional Committee called him a “strong and disciplined representative” whose leadership “has brought a breath of fresh air and hands-on moderate approach to Minnesota after years of complacent representation.”

But it’s not just parties who have keyed in on the race. Groups led by Norm Coleman and funded by George Soros’s son have identified it as an important seat. Other liberal and conservative “super PACs”  have indicated they’ll begin working in the district.

As for the head-to-head contest between Nolan and Cravaack, the latter has a 10-to-1 cash advantage over the former, as of late July.

But Nolan notes he’s already knocked off heavy-spending opponents: Clark out-spent him nearly 4-to-1 in their primary campaign.

“[Tonight] proves that a campaign with good grass-roots community support … and a good message can still win an election and beat a lot of money,” Nolan said. “That’s maybe the more important message than the fact that I won.”