In 2010, Michele Bachmann ran against an opponent she branded “Taxin’ Tarryl Clark.” This fall, she’s given a new name to her challenger: he’s “Big Spending Jim Graves.”

Both Bachmann and Graves, her DFL-endorsed hotelier opponent, are engaged in an effort to define just who Graves is. In Minnesota, Bachmann really needs no definition; 88 percent of likely voters (statewide, not just in the 6th District) surveyed by Public Policy Polling last week said they had an opinion of her, so for both campaigns, the goal four weeks out from election day is to introduce voters to the man tasked with trying to take her down.

From Bachmann’s angle, Graves is a prototypical big-spending Democrat, a would-be ally to Nancy Pelosi who has aligned himself with some of the most liberal lawmakers and policies coming out of Washington. Graves disputes that as a caricature, and he’s worked to fashion himself as a pragmatic centrist whose support for Democratic causes is very real, but only goes so far.

Graves emphasizes his business background when he’s campaigning, highlighting his time in the business world and his biography, with its roots in St. Cloud. At a Chamber of Commerce forum in Monticello this week, he told voters he would govern as a centrist, and be “willing to stand up to Pelosi or stand up to Boehner, stand up to the president, whether it’s Romney or Barack Obama” to compromise in Washington.

Graves on the issues

But Bachmann’s camp has tried to attach the “Big Spending” moniker to Graves, launching a website and a pair of television ads aimed at painting him as a typical liberal because of his stance on issues like the 2008 bank bailout, the 2009 stimulus bill and the Affordable Care Act.

“‘Big Spending Jim’ is something that he created through his voicing his support for big spending policies that have come out of Washington recently,” Bachmann campaign manager Chase Kroll said. “A lot of what he says doesn’t necessarily line up with what he actually supports.”

Graves doesn’t back away from the legislation Bachmann has badgered him about, but he said his support comes with caveats:

And Graves, who professed to the Monticello crowd that he’s a proponent of a small government that should “only do what we cannot do for ourselves,” said his professional life should be enough proof that Bachmann’s “Big Spending Jim” moniker is inaccurate.

But Republicans are trying to use his time in business against him.

The state Republican Party put out a laundry list of  what it called questionable business dealings from Graves’ past last Friday, ranging from a lawsuit with a former subcontractor for a construction job to the forced unionization of a group of employees. 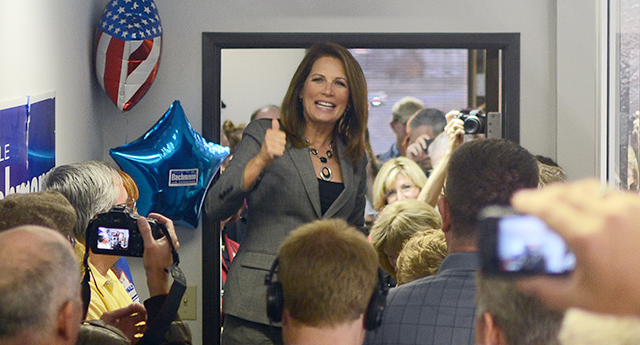 MinnPost photo by Devin HenryRep. Michele Bachmann speaking to supporters and volunteers at her St. Cloud office on Monday night.

The allegation the Bachmann campaign seized upon, however, had to do with a line in an online Graves biography where he identified himself as a member of the United Way of Central Minnesota board of directors, a spot Graves never held. He acknowledges now that he served on a committee instead.

“Not only can we not afford Jim Graves, I’m not entirely certain we can trust him,” Kroll said.

For his part, Graves said the issue was simply a misprint and he’s since corrected the biography online. The Minnesota GOP did not return calls for comment.

“Big Spending Jim” is, in essence, a sequel to Bachmann’s line of attack against her 2010 opponent, “Taxin’ Tarryl Clark,” a state senator.

In a series of ads released that fall, Bachmann used Clark’s support for a series of tax increases against her, including one literal tie-breaking vote on a doomed $435 million tax hike in 2010. The ads charged Clark with supporting tax increases on everything from Crayon sales and gasoline to the deep-fried bacon and beer served at the Minnesota State Fair. Bachmann beat Clark by almost 13 points that November.

To a certain extent, it’s going to be harder for Bachmann to brand Graves than it was Clark because she had a record Bachmann could point to, University of Minnesota political science professor Kathryn Pearson said. Graves, a political rookie, has no bill sponsorships or voting history to use against him.

But the message Bachmann has been pushing — that Graves would support typical Democratic priorities in Washington — is one that should play well in the conservative-leaning 6th District.

“[Bachmann is] trying to remind voters as frequently as possible that he is a Democrat running in a Republican district,” Pearson said.

Kroll said Graves’ lack of a voting record isn’t slowing down the campaign’s messaging against him.

“He hasn’t necessarily cast a vote for one thing or the other, but he has said that he supports all of those things … which I think portends to the type of person he would be if he ever had power in Congress,” Kroll said. “The more people get to know the real Jim Graves, the more people will break away from him and support a known commodity like Michele Bachmann.”

Bachmann undoubtedly remains the favorite in the race: the demographics in the new 6th District greatly favor Republicans, she’s a prolific fundraiser and she won’t need to spend any time introducing herself to voters. Major political prognosticators say she has an edge in the race, even if it’s not as much of a sure thing as in the past.

But Graves said his biography will appeal to moderates and disenchanted Republicans across the district — as long as he’s the one writing it.