Democrats didn’t have quite the success on the national scale that they did in Minnesota Tuesday night, but they did well for themselves by most measures.

President Obama won re-election, losing, it appears, only two states from his 2008 blowout win, and, buoyed by a few flawed Republican candidates in otherwise difficult-to-win states, they might actually add to their majority in the U.S. Senate. Despite Obama’s mediocre approval ratings and downright dreadful ones for Congress, 2012 will be remembered as a status quo election — and the result very well could be status quo governing from Washington for the next two years.

But first, here’s how it all went down.

In Minnesota U.S. Sen. Amy Klobuchar won re-election easily, knocking off Republican challenger Kurt Bills by 35 percent, larger than the margins projected by most polls before the election. The victory is one of the most lopsided in state history, and Klobuchar became the first senator from Minnesota to win re-election since Paul Wellstone in 1996.

Voters in the 8th District made Republican Chip Cravaack a one-term congressman, handing former representative Rick Nolan a 9-point victory. Cravaack had knocked off 18-term Democratic Rep. Jim Oberstar by 4,000 votes in a low-turnout Republican wave election in 2010, and his left-leaning district gave his seat to a progressive on Tuesday night.

All other Minnesota incumbents won re-election, some easily (Collin Peterson, Betty McCollum, Keith Ellison, Tim Walz and Erik Paulsen all won by double digits) and others, less so. Michele Bachmann won by a little more than 1 percent in a district that favors Republicans by 8 points. She defeated Jim Graves, a Democrat who ran as a moderate, who gave her what she’d long warned her supporters was coming — the closest re-election campaign of her entire career.

Republican Rep. John Kline won comfortably, by most standards beside his own. Democrat Mike Obermueller gave Kline a run for his money in a district with a new bloc of Democratic voters, and Kline would win by 8 percent — not particularly competitive, but by far the tightest race of his congressional career.

Around the Midwest, Democrats prevailed in Senate races in Wisconsin (where Tammy Baldwin became the first openly gay person elected to the Senate) and possibly in North Dakota, where the race between Republican Rick Berg and Heidi Heitkamp is too close to call as of Wednesday morning. Republicans successfully defend two Midwest House seats that had gained national interest — those of Steve King in Iowa and Sean Duffy in Wisconsin, and they held the House majority they won in 2010.

The final tally, per the New York Times: at least 52 Democrats (and an independent expected to caucus with them) in the Senate; at least 232 Republicans in the House; Obama in the White House, and divided government for at least two more years.

The results lead to a conciliatory tone from Minnesota Republicans, at least in the hours after it became obvious Obama would win re-election and the Senate would remain in Democratic hands.

Erik Paulsen told MinnPost he expects there to be a “cooling off period” after the election as both parties process the voters’ will from Election Night. The heavy lifting will start soon afterward, and he said there is a chance for new cooperation.

“All the verbiage and language, at least from the president and some of the leadership, signals the interest in talking about some of the tough issues,” he said. 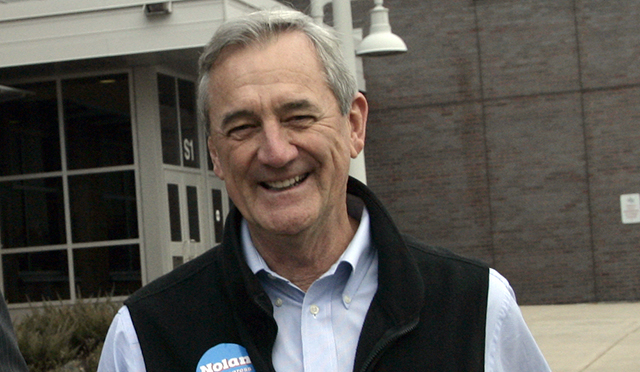 MinnPost photo by Paul WalshVoters in the 8th District made Republican Chip Cravaack a one-term congressman, handing former representative Rick Nolan a 9-point victory.
Over the past 23 months, Congress has taken on: a debt ceiling increase (which will need to happen again early next year), a series of short-term budget fixes in lieu of full-time appropriations (the current short-term budget expires in April), and battles over jobs legislation proposed by House Republicans and Obama. On nearly every major issue, House Republicans have butted heads with President Obama and Senate Democrats. But Kline echoed Paulsen, telling assembled Republicans last night, “We go back to Washington on Tuesday, to what will be some raw wounds there … but earlier tonight, Speaker [John] Boehner said he is willing to work with others if they are willing to work with us.”

Congress’s first post-election task will begin next week, when lawmakers return to Washington to address a series of deep spending cuts and tax increases set to take affect at the end of the year. Though it will be the outgoing Congress charged with finding a solution before the deadline, it will nonetheless be a key barometer for how the 113th Congress will work with Obama during his second term.

Obama has said higher taxes for the rich must be a part of any deficit reduction plan; Republicans have been vehemently opposed. The problem for Democrats: though Paulsen and Kline said there could be room for cooperation, Boehner didn’t even let Election Night pass without raising the barriers to such a plan.

“What Americans want are solutions that will ease the burden on small businesses, bring jobs home and let our economy grow,” he said. “We stand ready to work with any willing partner — Republican, Democrat or otherwise — who shares a commitment to getting these things done.”

Boehner said Obama’s re-election did not give him a mandate to raise taxes, a stance similar to one he took Monday, even before the election: that he and House Republicans would stand strong against them when fiscal cliff negotiations begin in earnest.

Minnesota Democrats said Obama’s re-election should, indeed, be viewed as a stamp of approval for his tax plan. Keith Ellison said he’d be willing to compromise on deep spending cuts if Republicans moved on tax increases, and he said Obama’s victory should signal to Republicans that’s where the country wants to go.

U.S. Sen. Al Franken recounted Senate Minority Leader Mitch McConnell’s infamous quip early last year that Republicans’ chief goal was to defeat Obama in the presidential election. They failed at that, he said. Democrats should have more leverage to push their agenda now.

In the end, though, Franken said a GOP House means Democrats won’t get everything they want; compromise would need to win out in the end.

“It is what it is, and we’re going to have to work together,” he said.

Cyndy Brucato contributed to this report. Devin Henry can be reached at dhenry@minnpost.com. Follow him on Twitter: @dhenry

What happens now in Congress?