WASHINGTON — With just a few exceptions, Minnesota’s congressional delegation had little to say about the set of gun control proposals President Obama pitched to a likely skeptical Congress on Wednesday.

The White House’s multifaceted plan is built around a handful of proposals gun advocates have pushed even before the December school shooting in Newtown, Conn., that renewed calls for more gun control. Among them are mandatory background checks on all gun sales (not just those made from federally licensed gun dealers) and banning assault weapons, armor-piercing bullets and magazines containing more than 10 rounds.

Of the Minnesota delegation, the two liberals in the House, Keith Ellison (he tweeted: “President’s gun proposals offer concrete steps. Congress should pass.”) and Betty McCollum (“I strongly support the President’s plan to help reduce gun violence”), praised Obama’s plan the loudest. For most others, there was a common theme to their reactions: They’re waiting to see further details before responding in full.

That makes sense, given the complexity of the issue, and it buys on-the-fence lawmakers a little political cover until the plan has been translated into the legislative language they use to fully vet bills.

But that didn’t stop advocates on both sides of the issue from responding quickly Wednesday. The National Rifle Association (NRA) pushed back hard right away, saying in a statement: “Attacking firearms and ignoring children is not a solution to the crisis we face as a nation. Only honest, law-abiding gun owners will be affected and our children will remain vulnerable to the inevitability of more tragedy.”

The group said it was focused on “keeping our children safe and securing our schools.” Last month, it proposed a federal grant program to help put more armed guards in schools.

Cedric Scofield, the legislative committee chair of the Minnesota Shooting Sports Association, said the NRA is focusing on the right things.

“I don’t see that all these gun ban schemes will solve the problem that people are trying to address right now, which is protecting people in gun free zones, which aren’t ‘gun free,’ because bad guys aren’t following the rules,” he said.

But gun control advocates were pleased with Obama’s plan. Joan Peterson, a Minnesotan who sits on the board of the Brady Campaign, said the Newtown shooting has inspired advocates to push lawmakers harder than ever to pass stricter gun laws.

The political reality is such, though, that there will be fights on most of it, especially considering so much of what Obama proposed needs congressional action to take effect.(ProPublica has put together a comprehensive look at where all members of Congress stand on guns, as well as political spending and voting history.)

While liberals in Congress have long supported tougher gun laws, passing them will require support from both Republicans, who control the House, and moderate, gun-friendly Democrats, a group especially important in pushing a bill through the Senate.

Recognizing that, House Republican leaders said they’ll wait to consider gun control until the Senate passes a bill. That’s easier said than done, given that in order to find 60 pro-gun control votes, Democrats need to persuade a handful of Republicans to break ranks while also maintain unanimous support among members of their caucus. Democratic Leader Harry Reid himself has been hesitant to back new gun control measures — he’s NRA-endorsed and said this week, “We need to be very cool and cautious” when crafting new gun laws.

Statements from Minnesota’s senators, Democrats Amy Klobuchar and Al Franken, didn’t say too much on Obama’s overall plans Wednesday, preferring to wait to see more details before committing to voting one way or another. But Klobuchar did put out a statement in favor of the Jones appointment, and Franken praised Obama and Vice President Joe Biden for pushing new mental-health parity measures.

“There are reasonable steps that we can take to reduce gun violence while honoring Second Amendment rights, and I’m pleased that the vice president’s task force has worked quickly to develop its proposals,” Franken said. “I look forward to carefully reviewing the vice president’s plan in full.”

(Update: At a press conference in Rochester, Franken said he backed the ammunition and background check provisions of the plan, but demurred on the assault weapons ban. His office clarified Thursday that he supports such a ban “in principle.”) 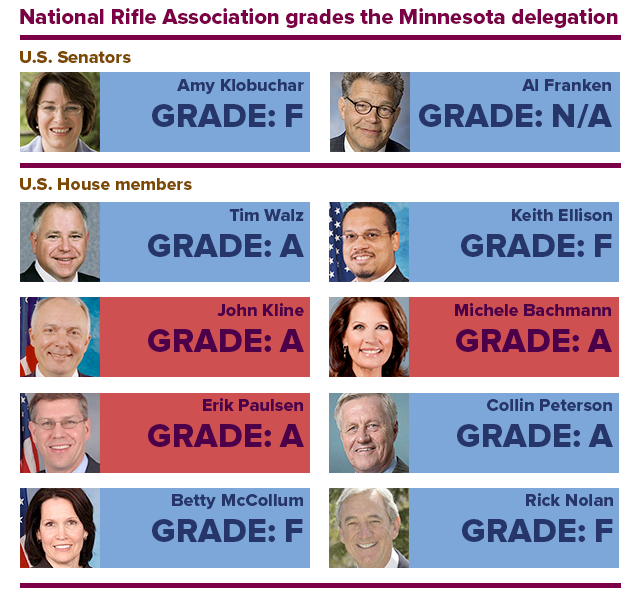 Senate leaders will probably move legislation in a piecemeal fashion, according to Politico, though few expect more controversial measures, like the assault weapons ban, to pass. Democrats said Wednesday they expect to be able to pass only one section of Obama’s proposal relatively easily: Expanding background checks to all gun sales.

“The most important part of this is to have universal background checks,” said Minneapolis Mayor R.T. Rybak, who attended Obama’s announcement at the White House. “We do them right now. The only difference is that we happen to do them in stores and we happen to not enforce them in … gun shows. If we’re going to enforce, then let’s enforce universally. That, when you think about it, is really common sense.”

Should any legislation make it to the House, its hurdles are quite high. Republicans have been slow to back new regulations and many offered measured statements on the proposals Wednesday.

Rep. John Kline, the chairman of the House Education and the Workforce Committee, said his panel would soon convene hearings on reducing gun violence in schools. He passed no judgment on Obama’s proposals, saying only: “The president and vice president have proposed a broad set of recommendations, which I plan to review carefully.”

“I will continue to work with Minnesota families, law enforcement officials, and mental health professionals, to explore all the potential policies to help prevent violence and protect individuals second amendment rights,” he said.

Rep. Michele Bachmann, who, like Kline and Paulsen, has an A-rating and endorsement from the NRA, didn’t release a statement Wednesday.

The moderate Democrat caveat applies in the House as well. Many rural Democrats receive good reviews from the NRA, among them Minnesotans Collin Peterson and Tim Walz. Of Obama’s plan, Peterson said Wednesday it contains “some good ideas, some bad ideas, and some new ideas,” but didn’t detail his feelings in full.

Though Walz (an NRA endorsee) has opened the door to supporting new gun regulations, he focused mostly on Obama’s mental health orders on Wednesday. “I am currently reviewing the president’s proposal, but as a strong supporter of our Second Amendment rights, I believe his proposal presents areas where we can all find common ground,” he said.

Scofield, a former NRA volunteer of the year, said national gun rights advocates expect there won’t be enough votes to pass the more far-reaching parts of the Obama’s plan (the assault-weapon and high-capacity magazine ban, for example).

But he cautioned, “We didn’t think Obama would be re-elected again, and he was.”

The Brady Campaign’s Peterson said advocates will be relying on grassroots activism to help push the proposals over the top this session.

“I was involved in the first Million Mom March in 2000,” Peterson said. “I haven’t seen this much activity and this much hope since then.”