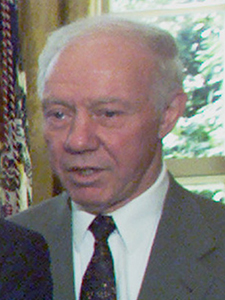 WASHINGTON — Jim Oberstar, the former U.S. Representative who spent much of his 36-year congressional career as a top Democrat on the House Transportation Committee, said it would be “a great honor” to serve as transportation secretary should President Obama come calling.

Oberstar served as the chairman of the House Transportation and Infrastructure Committee from 2007 to 2011. He ran for re-election in 2010 and lost in a dramatic upset. His chairmanship is the highlight of an otherwise lengthy résumé for a potential transportation secretary — in an interview with MinnPost Tuesday afternoon, he was quick to note his role as an aide to the House member who helped write the legislation establishing the Transportation Department in the 1960s.

“It would be a great honor. It certainly would be the culmination of all that I’ve learned and trained for and developed over the years,” Oberstar said. “I’ve been here since the department was born.”

To be sure, Oberstar said he hasn’t heard from the White House about the future of the department. But he’s made his interest known — when President Obama called Oberstar after his defeat in 2010, he offered to “assist his administration in any way.”

“Few know federal transportation policy better than him, and his defeat in 2010 sent a shock through the transportation committee. Like Blumenauer, his name came up four years ago, but at 78 years old, his moment may have passed.”

Also standing in his way: a public fight with the Obama administration over long-term transportation legislation during his last term. Oberstar was pushing a six-year, $500 billion transportation bill partially funded by a 10-cent gas tax increase in 2009, and he clashed with the White House over Obama’s (then) preference for a short-term bill and opposition to the gas tax hike. Last week, Oberstar told Politico he’d put the spat behind him.

On Tuesday, Oberstar had nothing but kind words to say about the departing LaHood, calling his tenure a “masterful performance.” He praised him for emphasizing safety initiatives and implementing the transportation portion of the 2009 stimulus. LaHood, a Republican, “proved invaluable in working with Republicans in both the House and the Senate” after the party’s big win in 2010, Oberstar said.

Oberstar has a big wish list for a second Obama term, as well: A long-term transportation bill (the current one expires in 2014), an emphasis on high-speed rail and a more hands-on approach to aviation security. And there’s no doubt Oberstar wants to be the one to do it.

“I would consider it a very great privilege and honor to serve the president and the country in that capacity,” he said. “But this is not something you campaign for. This is a personal choice of the president, and nothing has happened yet.”

Oberstar: ‘It would be a great honor’ to be named transportation secretary