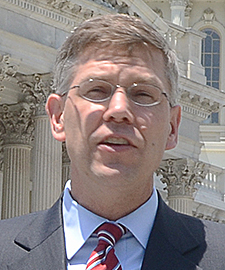 It won 270 votes in the House and Paulsen was, for a week, the Republicans’ spokesman for dismantling what the GOP sees as the most egregious parts of “Obamacare.” Minnesota’s whole House delegation backed the bill, and both senators supported it in principle. But the bill’s payment mechanism was controversial, the Senate never took it up, the White House opposed it and, by extension, device companies started paying the tax last month.

Paulsen will reintroduce legislation repealing the tax on Wednesday, looking to leverage the tax’s impact on business to try steering the bill through a friendly House, a potentially hostile Senate, and a White House thus far completely opposed to the effort.

“It is definitely an uphill climb, but we are feeling much more optimistic and hopeful that we’ll be able to get something to the president’s desk this year,” said Shaye Mandel, the Vice President and COO of the industry group LifeScience Alley.

The bill is identical to one the House passed last June by a rather healthy margin. Democrats who opposed the bill did so on two grounds — they took offense to the bill’s spending offset (a leadership-written provision that limited health insurance subsidies for low-income individuals) and warned that industry concerns over massive job losses were unfounded.

The White House initially threatened to veto the legislation, blaming the payment mechanism (which is not included in Paulsen’s new bill). But Obama’s opposition went deeper than that. Asked about Paulsen’s new measure Tuesday, the White House pointed to Obama’s December interview with WCCO, in which he came out flatly against repealing the tax.

His basic premise, shared by many congressional Democrats, is that the Affordable Care Act will provide a new customer base for medical device companies, thus increasing revenue and blunting the affects of the tax.

The industry, of course, disputes that, noting that most device consumers are older and already covered by Medicare or other insurance. They hope that sentiment takes hold in states with big med tech industries, no matter the politics of their representatives.

That means trying to find support in the Democratically-controlled Senate. Minnesota Sens. Amy Klobuchar and Al Franken and 16 other Democrats tried include a device tax delay in end-of-the-year fiscal cliff negotiations in December, but they fell short and the law took affect. Paulsen said Klobuchar is helping write the Senate version of the bill, though there’s no word on when it’ll be introduced.

The question, of course, is whether other Democrats, from Obama on down, will follow that lead.

“With bipartisan support in Congress, the administration is going to be much more receptive to entertaining passage,” Paulsen said.

Paulsen held up the one major ACA change Congress has managed to enact. In 2011, lawmakers overturned the law’s 1099 tax reporting requirement mandating business owners file documentation when they buy more than $600 worth of goods or services from a vendor. The rule was seen as burdensome and would have hit cash-strapped small businesses.

There are a couple key differences between that and the device tax, however:

Mandel said the device industry’s lobbying effort will be geared around a two-part message, the first being the lost revenue and job cuts companies have pinned to the tax.

Take, for example, St. Jude and Medtronic. The former told the Star Tribune last month that it plans to pay up to $60 million under the tax plan. When it laid off 800 employees last year, the tax was partly to blame. Medtronic plans to spend between $125 million and $175 million annually.

But the message is broader than that.

“It’s really about the future of the medical device industry and where it’s going to be,” Mandel said. “We see a future where the device industry is largely located in other places and where leadership no longer is in the US. We’re trying to keep that from happening.”

Paulsen’s office said he’ll have 157 co-sponsors on the bill when it drops on Wednesday. Majority Leader Eric Cantor voiced his support for the measure in a Tuesday speech, and Paulsen said the bill could move forward either on its own, or tied into a larger tax reform bill.

Its passage in the House is certain if GOP leaders want it to advance. Pushing it through the Senate and White House is where the real heavy lifting lies.

“It’ll be a challenge, but we’ll move forward,” Paulsen said.