In fact, they so anticipated Obama’s move toward entitlement cuts that they had prepared an all-out assault against them. Minnesota Rep. Rick Nolan spoke at an anti-cuts protest outside the White House on Tuesday. At a Thursday press conference, members of Rep. Keith Ellison’s Congressional Progressive Caucus posed next to boxes symbolizing 2 million petitions opposing the cuts, and Ellison was promising to organize votes against them.

As a stand-alone budget proposal, Obama’s plan is dead on arrival in Congress. It functions more realistically as his opening salvo in a broader debate over deficit reduction: In offering to compromise by cutting entitlement programs, he’s hoping Republicans will do the same with new tax revenue.

The splashiest part of Obama’s proposal is something called “chained CPI.” Essentially, chained CPI ties the growth of Social Security benefits to a slower rate of inflation. Such a move would save about $130 billion over 10 years, but at the expense of individuals on Social Security, who would see their benefits cut. Obama also proposed more than $300 billion in Medicare cuts, though both are contingent on Republicans giving on revenue.

Compromise, by definition, ensures hardliners for one policy or another are going to unhappy with what’s put before them. So it’s no surprise that the most vocal opponents of Obama’s plan weren’t Republicans, who dismissed it almost out of hand, but members of Obama’s own party.

Under an unseasonably hot April sun on Thursday, members of the Progressive Caucus raged against the Social Security cuts for nearly half an hour, and weren’t afraid to call out Obama along the way.

But the angst is not confined to just the liberal wing of the party. In February, a group of 107 House Democrats — more than half the caucus — wrote Obama a letter demanding the cuts be taken off the table in budget and deficit reduction negotiations.

The party as a whole seems split on the issue. For moderate Democrats, instituting a policy like chained CPI is not necessarily off limits as long as Republicans are willing to similarly compromise on revenue as part of some large-scale deficit reduction package.

“It depends on what’s coming in on the other side,” Rep. Tim Walz said. But, “as a stand-alone, no,” he wouldn’t support something like chained CPI.

The more vocal group is the liberals, like Ellison and Nolan, who flat-out oppose any plan to cut entitlement benefits for the sake of deficit reduction.

“In the Bible, it’s thou shalt not kill,” Nolan said, “and as far I’m considered, Social Security, Medicare are really truly sacred compacts with the American people, and I’m not about to compromise on the benefits.” 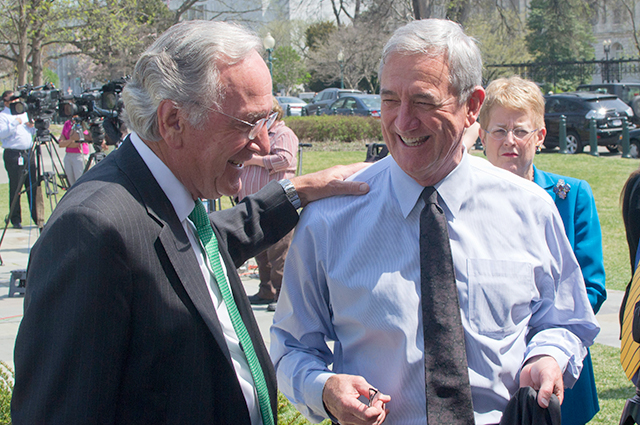 They’re also concerned that Obama may be putting the cart before of the horse by proposing this now.

Obama’s budget proposal is close to a deal he pitched to Republicans during deficit negotiations last winter, though Republicans wouldn’t accept the plan, chained CPI and all, because Obama was looking to raise taxes along the way. Now, Democrats say, Obama has staked out his opening bargaining position too close to the center, and that Republicans might try pulling him even further right as the country approaches the federal debt limit this summer (the debt limit deadline lead to a large deficit reduction package, and spawned the derided sequestration cuts, in 2011).

“I don’t think we should be trying to induce Republicans to come back to the table by throwing Social Security out there,” Ellison said. “They’re not coming his way. They’re actually telling him, come a little closer without giving us anything.”

For their part, Republicans have said there’s little to like in Obama’s proposal, calling the Social Security plan “modest” and reiterating their opposition to increased revenue. After allowing a tax increase on high-income earners in January, the party has been unified against new revenue proposals and doesn’t show any outward signs of splitting on that yet.

Which probably means, for the moment, that liberal consternation over a possible switch to chained CPI is premature. In introducing his budget this week, Obama said his entitlement cuts were tied to Republican concessions on revenue, that, “these reforms have to go hand-in-hand with reforming our tax code … that’s the bottom line.” And Nolan said Obama promised House Democrats he wouldn’t push chained CPI unless Republicans put tax revenue on the table.

“He said he’s not going to do it unless he gets a substantial increase in taxes on the wealthy, but he said the Republicans are not about to go along with that, so don’t worry about it, it’s not going to happen,” Nolan said. “I suspect he’s probably right on that point.”

But, Nolan said, if that’s the case, Obama should never have put the cuts on the table in the first place.

“He’s always negotiating with himself. He’s making the compromise before he got into the negotiation,” Nolan said. “He put together the grand compromise, and negotiations haven’t even begun.”