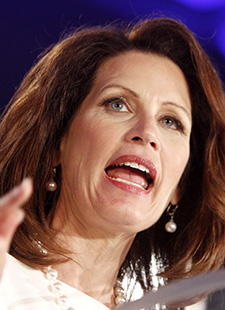 The poll gives Graves a slight lead, 47 percent to 45 percent, but that’s well within the poll’s 4.4 percent margin of error. About half of the poll’s 500 respondents hold an unfavorable view of Bachmann, according to Public Policy Polling, a Democratic firm that conducted the poll for the Graves campaign.

A two-point lead is statistically insignificant, which makes the poll fairly consistent with the results of last November’s elections, when Bachmann defeated Graves by 1.2 percent. The poll’s partisan breakdown was: 39 percent Republican, 29 percent Democratic, 32 percent independent (The 6th District is considered the most Republican-leaning in Minnesota).

In response to the poll, Bachmann spokesman Dan Kotman said: “Democrat Jim Graves can buy all the polls from Democrat firms that he wants, but it won’t change the fact that he is in lockstep with the Obama-Pelosi agenda and out of touch with the 6th District.”

Some caveats: This is an internal poll for the Graves campaign, conducted by a Democratic firm using an automated telephone survey of only 500 voters. All that said, PPP is a very respected pollster (it performed especially well in Minnesota last November).

Here are the poll’s crosstabs.