WASHINGTON — The House passed a repeal of the Affordable Care Act on Thursday night, at once a crowning achievement for House conservatives like Michele Bachmann, who sponsored the bill, and somewhat of an afterthought in a week that saw GOP attention turn sharply elsewhere.

Affordable Care Act opponents wielded a new argument against the law this time around: that after the Internal Revenue Service admitted to singling out applications from conservative groups for extra scrutiny, it would be folly to give the IRS additional power (the bureau is charged with issuing health care subsidies and imposing penalties under the law).

It was indicative of the way this week went in Washington — House Republicans would normally have waged a PR campaign based around their vote to repeal “Obamacare.” Instead, they made headlines pursuing the triple controversies of the IRS, an investigation into the Associated Press and their Benghazi inquiry. In fact, when Republicans did bring up the ACA, they were often left fielding questions about why, after 30 previously failed attempts to repeal the law, they were even trying to do it again.

“Many people have said this issue is dead. Many people have said that Obamacare is here to stay,” Bachmann said at a Thursday morning press conference with Tea Party activists. “It is back on the table. We fully believe that the American people will demand, because when they see the abuse of power from this administration and the IRS, a full-scale repeal of Obamacare, not just in the House of Representatives, but also in the U.S. [Senate]. We believe that the heat will become so hot that even the president of the United States will be forced to repudiate his signature legislation.”

That’s just absolutely not going to happen, of course — President Obama will not sign a full-scale repeal of a law whose once-derisively-given nickname (“Obamacare”) he now embraces. The House passed Bachmann’s repeal bill 229-195 on Thursday, but with the Senate and White House opposed, that’s as far as it’s going it go.

The arguments in favor of repeal (Bachmann summarized her version of them in an Investors Business Daily op-ed Thursday) and against it have remained fairly static of late, so this week, Democrats began pushing the question of why it’s come before the House again, when its failure is assured.

In statements, Minnesotans Betty McCollum called the bill a “Tea Party charade,” and Keith Ellison said such votes are “wasting he American people’s time.” Even Tim Walz, who traditionally plays the pragmatist, issued a statement bashing “side-show political votes on bills that have no chance of becoming law.”

So why did the GOP even try it?

In the end, the vote was fraught with symbolism: Even if full-scale repeal is sure to die after House passage, Republicans still want to put their opposition to the law on the record.

Republican staffers have been wheeling around a prop over the last few weeks, a stack of paper meant to represent “Obamacare red tape” taller than many who stand next to it. It flanked Speaker John Boehner during his weekly press briefing on Thursday, when he waved around a small card detailing GOP jobs legislation. The message was: Republicans are trying to repeal a stack of new government regulations in favor of a simple pro-jobs agenda. Though it has no hope of passage, the entire party needed to unite behind repeal as a statement of its priorities more than anything else. 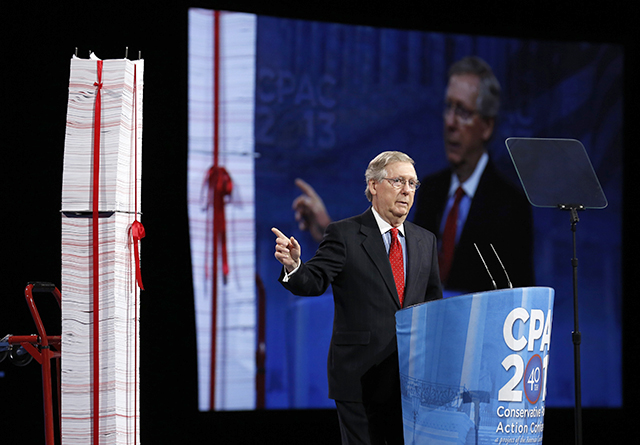 “A full repeal is needed for keeping this law from doing more damage to this economy and increasing health care costs,” Boehner said. “But some progress has been made, and Republicans will continue to work to scrap the law in its entirety so we can focus on patient-centered reform to lower costs and protect jobs.”

Of course, pushing repeal as often as the GOP has opens the party up to criticism, both on and off the Hill. Democrats seized on a fairly cynical New York Times article this week showing that House Republicans have used about 15 percent of its time since 2011 trying, mostly in vain, to repeal the law. American Enterprise Institute congressional scholar Norm Ornstein said no law has ever received as much attention from an opposing party as the ACA.

“This has become, almost literally, a monomaniacal obsession,” he said.

There is another way to approach repeal, of course, one the GOP has found reasonably successful in the past: Strip sections of the Affordable Care Act they consider the most grievous.

Republicans noted this week that Congress has passed, and Obama has signed, seven bills to undo parts of the law, like removing business tax-reporting requirements or defunding a handful of small ACA programs. This session, members have put forth similar, smaller bills, narrowly focused on removing specific parts of the law, one Minnesota-specific example being Rep. Erik Paulsen’s bill to end a new tax on medical device manufacturers.

Those bills are often as unlikely to pass as full repeal, which the House has really only voted on three times (the Obamacare repeal scorecard, then, looks like this: three failed full-scale repeals, and seven successful partial repeals and 27 unsuccessful ones). While such votes are still polarizing, they’re not nearly as bad as trying to scrub the whole law: 37 Democrats backed Paulsen’s device tax bill last year, for example, while only two voted for full repeal on Thursday.

Boehner said his conference would discuss how to properly replace the ACA over the next few months, indicating more votes against the law might still be on their way.

“When we have further votes that we’ll take, we’ll let you know,” he said.

But even if it’s worked in the past, Ornstein said he’s not bullish on partial repeal’s chances this session, primarily because so few of the GOP’s repeal overtures have come with widely acceptable replacement ideas.

‘The caucus says no, all we want to do is vote on repeal,” he said. “They want to indicate their unhappiness and arguments with anything Obama is for. That affirms them with their core constituency.”

Here’s some other Friday reading on the Affordable Care Act: