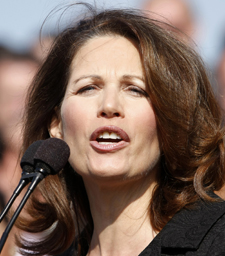 Bachmann, the chairwoman of the Tea Party Caucus, and Nolan, a member of the Progressive Caucus, have co-sponsored a bill the bar the Obama administration from providing military aid to the rebels fighting in Syria without congressional authorization. The bill allows for continued humanitarian relief, but would require a report to Congress every 90 days on the content of such aid.

Here’s what the pair had to say in a joint statement:

“Giving weapons to the Syrian opposition means, in all likelihood, that the United States will be arming and aiding extremist groups who seek to defeat us and our way of life,” Bachmann said. “To make the American taxpayer pay to send arms to our enemies is madness. Rather than unilateral foreign policy decision-making from the White House, there needs to be careful debate by Congress, as is our constitutional responsibility, and a clear strategy that is in line with America’s national security interests before any involvement is considered.”

“Regardless of how you feel about the conflict in Syria, we must insure that this matter is openly and thoroughly debated and voted on by the Congress before the United States becomes involved in yet another ‘war of choice’ we can ill afford,” Nolan said. “The simple truth is we have no friends in this conflict. The sectarian violence between Sunnis and Shias has been going on for more than 1,000 years. Sending arms will only escalate the violence and prolong the conflict. This matter, however tragic and sad, will not be resolved by the US’s involvement or intervention and will only invite resentment from both sides, as has been proven time and time again. We must get over the false notion that the enemy of our enemy is our friend.”

The bill has little chance of becoming law, but it illustrates the unlikely political bonds forged by the Syrian conflict. The House legislation is similar to a bill proposed in the Senate by a group that includes liberals Chris Murphy (Conn.) and conservatives Rand Paul (Ky.) and Mike Lee (Utah), for example.