WASHINGTON — It says something about Jake Sullivan that “Supreme Court law clerk” is among the least-notable lines on his résumé.

The Minneapolis native is one of a small handful of American diplomats whose secret meetings with Iranian officials reportedly helped lay the groundwork for a nuclear deal announced over the weekend. Sullivan, Vice President Joe Biden’s top national security adviser, traveled on President Barack Obama’s orders to Oman and Geneva to work out the deal, according to the Associated Press, meeting with career Iranian diplomats and nuclear experts critical to forging the deal high-level officials finalized out last week.

Sullivan’s only in his mid-30s, and his CV is already overflowing with roles anyone else might consider career-defining. Before he worked for Biden, Sullivan was the director of policy planning and deputy chief of staff at the State Department, traveling to 112 countries as one of Hillary Clinton’s closest aides. Sullivan was a holdover from Clinton’s 2008 presidential campaign, where he served as her top debate-prep partner and deputy policy director.

He came to Clinton after a stint as the chief counsel in Sen. Amy Klobuchar’s office. That was after his time as a clerk to U.S. Supreme Court Justice Stephen Breyer, which itself followed tenures as a Minneapolis lawyer and law professor, positions he could attribute to either his J.D. from Yale or his Rhodes Scholarship and degree in international relations from Oxford.

White House officials didn’t make Sullivan available for an interview for this article, but he laid out a lot of details about his career and personal governing philosophies while speaking at the University of Minnesota’s Humphrey School last spring.

Sullivan talked about attending a climate-change conference in Copenhagen that didn’t end until 2 a.m., when everyone from French President Nicolas Sarkozy on down was stranded in a blizzard. He told about a time in Liberia when he and Clinton listened to a lecture on a local caterpillar infestation. He described his reaction the first time he walked into a behind-the-scenes meeting at the Supreme Court or the Situation Room.

He told graduates he’d always wanted to work in public policy after college, and that when he entered the arena, he was surprised at how personal it was — and, because of that, how imperfect it is, as well.

“Public policy is a study in imperfection,” he said. “It involves imperfect people, with imperfect information, facing deeply imperfect choices — so it’s not surprising that they’re getting imperfect results.”

Sullivan advised the graduates to get in the game as soon as they could, that in the “imperfect world” of policy-making, the most important thing is getting as many voices to the table as possible.

“We’re all just trying to make something good happen,” he said. “What this means for you is that you have standing to contribute to the debates and the decisions. Right now, today. Not later, not at some future date when you’re older or more experienced or battle-hardened. Now.”

Teachers and administrators at Sullivan’s alma mater, Minneapolis’ Southwest High School, said they were expecting success from him.

Barb Mahal, a clerk in the secretary’s office where Sullivan’s mother worked, said Jake, like the rest of his four siblings, was a stand-out academically, athletically and socially. He was on the soccer and cross country teams, an editor for the school paper, president of the student council and voted “most likely to succeed” by his class. 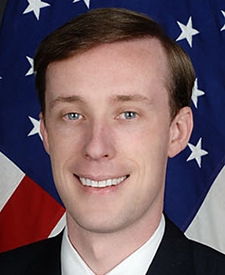 Mahal said he was a star on the Quiz Bowl and debate teams as well. (In college he’d take second place at an international debate competition.)

“They would go to Quiz Bowl to compete or debate, and, well guess who won it all for the Southwest Lakers?” she said. “Jake. He was that outstanding of a young man.”

Richard Schwartz, Southwest’s English teacher and former head of the school’s International Baccalaureate program, took a group of students to see Sullivan speak at the Humphrey School last spring. He said they came away impressed, both with his experience and the way he spoke about his time in Minnesota.

“He took the time to speak with our kids, ask about them, ask about the school and the program,” he said. “The focus of the discussion was: You never know what direction your life is going to take. … The challenge is, when you’re young, to keep an open mind, to provide yourself with a foundation and ability to pursue interests, whether it be formal academics or whatever.”

From Southwest, Sullivan earned political science and law degrees at Yale, where he was an editor at the Yale Law Journal. At Oxford he served as managing editor of the Oxford International Review.

Afterwards, he bounced between legal roles: He was an associate at Faegre & Benson and an adjunct professor at the University of St. Thomas before clerking for two federal judges, including Breyer.

Klobuchar found him “incredibly smart and very capable” when he worked in her office, according to a spokeswoman, and when he joined Clinton’s presidential campaign, he quickly moved into her inner circle.

He was Clinton’s “go-to debate prepper,” according to the Washington Post, working with her with both policy and political issues. He helped guide Clinton through the Senate confirmation process as well, and took a spot in her State Department, eventually becoming her deputy chief of staff and the director of policy planning.

Diplomatically non-committal on a political career

“He was probably if not her closest, certainly one of her two or three closest advisers,” said Humphrey School Dean Eric Schwartz, who served in the State Department at the same time. “She trusted him completely and he had a lot of attributes that distinguished his tenure.”

Schwartz said Sullivan’s résumé is certainly an ambitious one, but, “I think he is ambitious in exactly the way somebody ought to be.”

“He sees positions of influence as opportunities to make a difference, but he is very respectful of people with whom he works,” he said. “I think he also proves the adage that in Washington, nice guys don’t have to finish last.”

Sullivan took his spot in Biden’s office in February, and in a statement at the time, Biden called him “respected across the administration for his intellect, his dedication to our country, and the perspective he brings to even the most complex issues.” Soon after his appointment, Obama directed him and a deputy secretary of state to the Middle East to begin discussions with Iran, according to the Associated Press.

Where Sullivan goes from here isn’t clear. A couple of years ago he told TIME that if he wasn’t in the Obama administration, he’d be “back in Minnesota, in law and/or public service.” Foreign Policy reported that he was considering returning home “to begin a political career and potentially a run for Congress” before Biden called.

Richard Schwartz said when someone at the Humphrey School asked Sullivan if he was considering a life in politics, he was diplomatically noncommittal.

”I do recall him saying that that is not a result of a preplanned kind of journey,” he said. “That’s what he was trying to impress upon the kids: You never know where your interests are going to take you.”