WASHINGTON — Early in his new memoir, “My Country, ’Tis of Thee,” Rep. Keith Ellison prints the lyrics of an 1843 abolitionist version of the titular song, one lamenting slavery in America and heralding the day it would end.

He wrote that he draws as much inspiration from that version of the song as the more famous one, and that, taken together, they paint a picture of an imperfect country making progress toward liberty and equality.

In his book, on sale on Tuesday, Ellison looks to fit both himself and his platform into where the United States is today: he sees equality as spreading as quickly as ever before, but argues the United States has a long way to go before everyone is on a level playing field, and if only Congress would institute his more liberal policies, we’d get there more quickly.

He lays out his platform, both domestic and foreign, though it covers little new ground for those who have followed Ellison’s career. He’s the outspoken co-chairman of the liberal Progressive Caucus and returns from trips abroad calling for more peaceful American intervention in war-torn Africa and the Middle East, and that’s all here. But Ellison uses the memoir more to expound his thoughts on race in America, what originally attracted him to his Muslim faith, and the role he sees himself playing in politics today.

‘The last stages of racism’

Ellison’s views on racial progress run throughout the book. His worldview comes from his family and his upbringing in Detroit. His father, Leonard, a successful doctor who got through school on the GI bill, fostered a competitive and hard-working spirit in his children while Ellison’s mother, Clida, taught them about southern segregation. Ellison became aware of racial tensions in school, when teachers would compliment him as “smart — for a black student.”

He studied the civil rights movement, and in college was attracted to Islam because of its tenets on racial equality. Ellison turned his focus to inner-city economic and social-justice issues when he moved to Minneapolis for law school, protesting gang and youth violence and working against what he considers harsh sentencing for crimes like drug possession.

He was inspired to enter politics by 1995’s Million Man March and his desire to do more to affect change than simply protesting. When he came to Washington as a congressman, he said he was “in awe” to serve in the same chamber as Abraham Lincoln and leaders like his father’s favorite politician, civil rights champion Adam Clayton Powell of New York.

“I hope that we’re in the last stages of racism, wiping away its last vestiges in this country,” he wrote. “I have watched it erode within my lifetime. The racial constrains I endured growing up — which were usually not spoken but implied — do not apply to my kids and their generation.”

A hesitant spokesman for faith

In that context, his 2006 election to Congress — the first black person sent there by Minnesotans, and the first Muslim ever to serve — was a historic moment, and for some, a controversial one. That’s not lost on Ellison, but he wrote that it was never his focus. 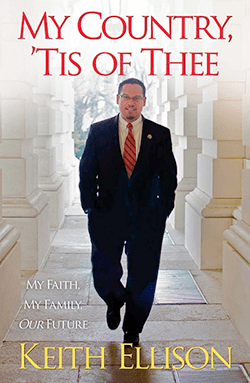 Ellison’s 2006 House campaign was inspired by political leaders like Paul Wellstone and California Rep. Barbara Lee, the only House member to vote against authorizing force after 9/11. His platform in 2006 was anti-war and pro-economic equality.

But the focus kept turning to his religion. Reporters asked about it after he won the DFL endorsement for the seat. When he was elected, his decision to use a Quran for his ceremonial swearing-in was controversial.

“It never occurred to me that I would be making history if I won this seat,” he wrote. “That wasn’t on my radar, nor was it part of my platform.”

Ellison became a Muslim when he was 20, but he wrote that he doesn’t aggressively push his faith, that for him it’s more about inner peace than preaching the good word. Nevertheless, he became, and remains, a champion for Islam and Muslims in Washington, most notably publicly castigating his colleague Rep. Michele Bachmann over claims of Muslim Brotherhood infiltration in the government in 2012 and testifying at a Homeland Security Committee hearing on “Muslim radicalization” in 2011 (his emotional testimony caught the eye of Karen Hunter Publishing, which soon signed him to a book deal).

But Ellison says he’s a hesitant spokesman for his faith.

“My faith was rarely something I wore publicly,” he wrote. “I never wanted to be put in a position of being seen as some sort of Islamic leader. … But I do understand that, as the first Muslim ever elected to Congress, I would be asked to step outside my comfort zone a bit more than I wanted.”

Ellison’s progressive politics are well known and he includes a heafty serving of it in “My Country ‘Tis of Thee.” He’s advocated for liberal social and economic policies while in Washington and pushed for less war, but more aggressive U.S. influence in the Middle East, including with Iran.

But he also offers a blistering critique of Republicans, saying the party “has been hijacked by folks who practice the politics of divisiveness toward people of color, immigrants, women, and the LGBT community” and “by corporate interests, and interests that are more concerned about protecting private gain than about advancing the entire nation.”

Ellison wrote that he represents something different, a “politics of generosity” focused on helping everyone succeed. He likened it to when, as a kid, his mother would add water to a pot of gumbo so more people could share it.

“In our society, we’re not stretching the gumbo. Some people will eat, some will not. That’s the politics of scarcity, and that’s what I was running against.”