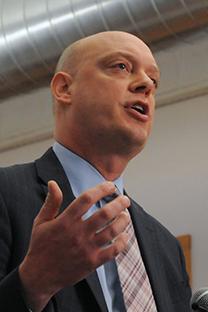 The first lawmaker to ask questions, Rep. Paul Gosar, a conservative Republican from Arizona, put MNsure’s interim CEO Scott Leitz firmly on the hot seat. He asked why the exchange had given bonuses to staffers last year (Leitz: those were approved by a previous director); whether MNsure lost users’ applications (they found them and are working through them); and if the state had fired anyone involved with the roll-out (“Individuals are no longer with the organization,” Leitz said).

But then, lawmakers shifted their focus elsewhere. Leitz was tucked between officials from two exchanges that have taken even more heat than MNsure, Oregon and Maryland, and Republicans had a lot of questions for them.

They had other concerns, too, but not many dealt with Minnesota. One lawmaker wanted to know if California would be able to fund its generally-successful exchange in the future. A Hawaii member had a line of questions for her exchange’s official. And Republicans slammed the Affordable Care Act itself: increasing premiums, missed enrollment goals for young people and so on.

In the end, Leitz and MNsure blended into the background — the committee didn’t have a MNsure-specific question for the last two hours of the hearing.

“I didn’t know what to expect, I didn’t have a standing expectation,” he said. “But certainly I was ready to answer whatever question that they would have had for us.”

Leitz came to this hearing of the House Oversight and Government Reform Committee Thursday with the shortest statement of the six exchange directors called to testify. He said MNsure, despite its admittedly ugly roll-out, was working better at the end of the open enrollment period this week than when he took over in December.

MNsure’s website has a 99 percent success rate, up from 70 percent last year, he said. Doubling the exchange’s call center staffing “dramatically” decreased wait times in March. And the exchange’s budget is balanced in 2015, and sustainable for the future, despite earlier concerns tied to low enrollment.

“Today I am proud to say MNsure is stable, secure and successful,” he said.

After the hearing Leitz attributed Minnesota’s success — relative to some of the rest of those testifying on Thursday, at least — to an outside review of MNsure by UnitedHealth subsidiary Optum in January.

Exchange officials are still looking for a new lead vendor for the exchange, and Leitz said, “very shortly we anticipate being able to close that out.”

That vendor will have to make a lot of decisions on how to best correct the errors remaining in MNsure’s system. Optum made a series of recommendations on that front three months ago, up to and including scuttling the whole system and starting over.

That’s the type of overhaul other states are facing today. Oregon has struggled so mightily that the federal government granted it an extra month of open enrollment, and officials are considering ditching their exchange for the federal version. Maryland officials, hammered most of all by committee Republicans on Thursday, are using technology from Connecticut to fix their website.

Will Minnesota have to go the same way?

“We know that the exchange was stable through open enrollment, but we also know that we need to make a lot of progress on continuing to improve the exchange,” Leitz said. “When the lead vendor is able to join us, part of their initial responsibilities is going to be really to evaluate what we have in place right now, what changes or improvements need to occur and help us carry those out. That will be part of the evaluation process.”