CC/Flickr/Doc Searls
As infrastructure expands, some municipalities are getting into the broadband game.

WASHINGTON — Like all plans should, this one started on the back of a napkin.

In the early 2000s, Scott County wanted to broaden the availability of high-speed broadband Internet for its government buildings. County officials decided to build their own fiber optic broadband network and connect to the Internet for cheap.

The opportune word here, of course, is cheap. So by the middle of the decade, officials had hatched a scheme — on the back of a napkin, County Administrator Gary Shelton said — in which the county, state and broadband providers share both the costs and benefits of the new network. Scott County paid the upfront capital cost of building the physical network. In exchange for tapping into the network to deliver broadband to their users, the state pays the network’s operation costs and providers pay for maintenance.

Today, Shelton said, most of the county’s government buildings, from fire stations and schools to water towers, use the network, as do some state agencies from Minneapolis to Mankato. The county has used it has an incentive to attract new business, he said, and the state saves about $1 million a year, while the county saves $35,000 by owning its network instead of leasing from providers, according to estimates.

Lawmakers in St. Paul and Washington have long grappled with expanding rural broadband access, with state lawmakers considering pumping $25 million toward that goal this year. But once you find a way to build the physical components of a network, who’s best put in charge of actually offering quality Internet services over it?

The telecom industry says long-time providers are best suited to the task. But public interests groups and some local governments, looking for faster Internet speeds and lower costs than are offered by private providers — which are often insulated against stiff competition — have occasionally looked to municipally owned networks instead.

They got a big boost from Federal Communications Commission Chairman Tom Wheeler, who said Wednesday he’d look to strike down state laws preventing local public networks in the name of fostering Internet competition.

Handful of networks in Minnesota

“We have shared it with some of our providers, because we have tried to make broadband more affordable and available throughout, but not by trying to get into the business of being a broadband provider,” Shelton said.

But other municipalities are getting into the broadband game, including more than a dozen in Minnesota, looking to compete with the few private providers that dominate their markets, Christopher Mitchell, Director of the Telecommunications as Commons Initiative at the Institute for Local Self-Reliance said.

This isn’t a new idea, Mitchell said, and it’s more prevalent than many people realize. Municipalities began building their own cable networks as early as the 1980s, he said, and they moved into fiber networks about 15 years ago. There are up to 250 public cable or fiber netwoks around the United States.

Minnesota’s networks are scattered across the state. Crosslake and Barnesville offer the state’s two stand-alone incumbent municipal broadband networks, both of which were borne out of the towns’ pre-existing phone services.

In the early 2000s, Windsom residents voted to allow its municipal electric utility to offer broadband access to residents and business. Lac Qui Parle County, on the South Dakota border, won a federal stimulus grant and loan to partner with a local telephone cooperative to expand fiber service throughout to about 1,700 residents and government facilities. And Sibley County just launched its own broadband cooperative covering 10 small cities and 21 townships.

The Minneapolis-based ILSR has been researching municipal ownership and co-op models and pushing state governments to remove barriers to them for nearly a decade.

Mitchell argues municipal networks can help improve prices and quality by going head-to-head with private providers who aren’t used to competition. Companies have no incentive to offer a better service when they dominate their market, which hurts consumers. And other private companies are less likely to challenge a dominant provider because starting a new network is too expensive to be lucrative for a for-profit company. Publicly financed networks can stand to go a lot longer before turning a profit, which allows them to move in challenge private providers.

“Because there is no real competition, the existing providers do a really poor job, especially in rural areas,” he said. “There’s basically two [solutions]: one is public ownership in the form of municipal networks or co-ops, the other is regulation. … I would argue right now that regulation is not really an option given the power of Comcast in D.C.”

(The Philadelphia Inquirer has a great story on the lobbying muscle of Comcast, which is looking to buy Time Warner Cable, including its efforts on a relatively tiny rural broadband loan program earlier this year. The company spent nearly $19 million lobbying Congress in 2013). 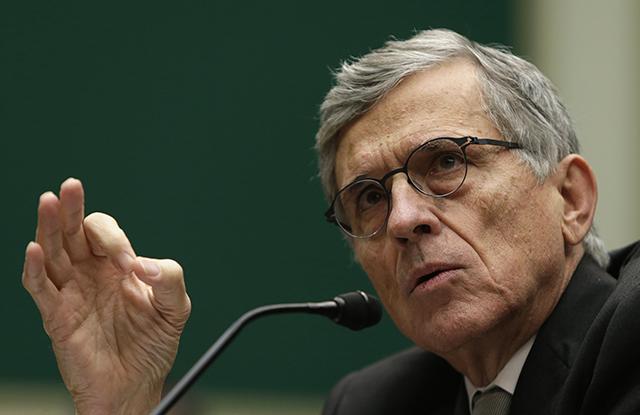 Wheeler, the FCC chairman, said Wednesday that he’d use his federal authority to block 20 state laws — often backed by telecom companies — restricting municipal networks, arguing the broadband industry is already lacking competition as it is. Mitchell called it “the strongest statement to date by the FCC in restoring local authority.”

Democratic Sen. Al Franken, who has criticized Wheeler’s approach to other Internet issues, said he agreed with the move.

Municipal systems have not come about seamlessly, occasionally missing revenue targets and threatening the municipalities’ ability to pay back their bondholders.

The telecom industry points to a network established in Monticello, where officials built a network to compete with the city’s two dominant private carriers. After the new network got off the ground in 2009, a price war ensued. While that brought down prices for consumers, the city couldn’t compete with private providers as well as it expected, and it’s currently facing a lawsuit from bondholders who lost money investing in the project. 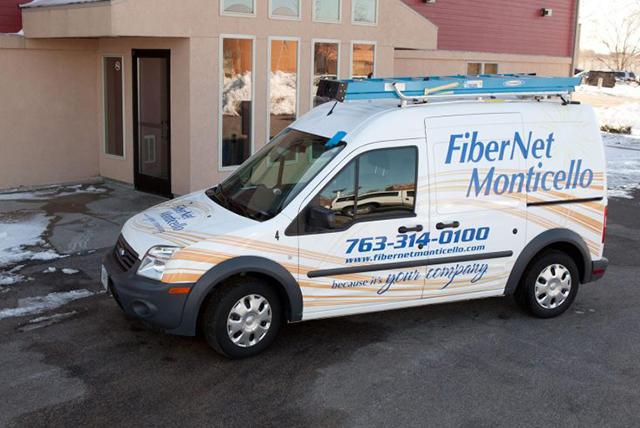 FiberNet Monticello
After a 2009 price war with private Internet providers, Monticello’s municipal network has had difficulty paying back bondholders.

DFLers in the state Legislature are considering spending $25 million on expanding broadband to rural areas this session, looking to meet the goal to give every Minnesotan access to high-speed Internet by 2015. 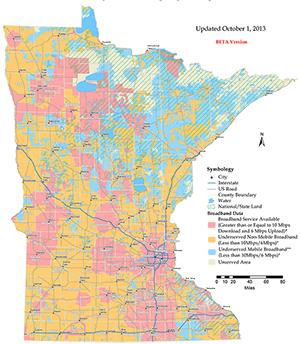 Connect Minnesota
In its 2013 report, Connect Minnesota mapped
broadband access across the state. Areas in
pink have access to high-speed broadband
while areas in yellow and blue have slower
access speeds, according to the group.
Click the map to view a larger version.

There are two metrics that determine what counts as “high-speed” Internet: upload speed and download speed. Connect Minnesota, a non-profit tracking broadband coverage in the state, says only about 75 percent of Minnesotans have access to connections that meet the state’s goals for both metrics. But nearly 99 percent of the state has access to the fastest download speeds.

The Telecom Alliance is uncomfortable with the DFL’s rural broadband proposal, Christensen said, arguing its focus should be on completely unserved areas rather than those that have Internet, just not as quick as the state would like. If the pot of money is too large, he said, some could go to establishing municipal networks that have proven fiscally shaky.

“They’ve been sold a bill of goods, that they need their own network,” he said.

He said his group would prefer to “work with local government and identify who really doesn’t have it, and who needs its, and how are we going to get it to them?”

Building out rural broadband infrastructure has won some bipartisan support on the congressional level. A non-binding amendment Franken offered to a budget bill last year calling for increased funding for rural broadband passed the Senate unanimously. He compared it to public works programs like rural electrification and the interstate highway system.

A federal program called the Connect America Fund provides a bit of funding toward this goal. In 2012, Minnesota received $11 million to expand broadband capability rurally, and the program is set to spend $9 billion nationally over the next five years.

“It’s to get high-speed broadband to every part of the state so you can run a small business and not be hampered by slow Internet,” Franken said.

On the federal level — and, if Wheeler has his way, the state level — the focus is on building the networks; broadband companies and municipalities can argue over providing the service later on.