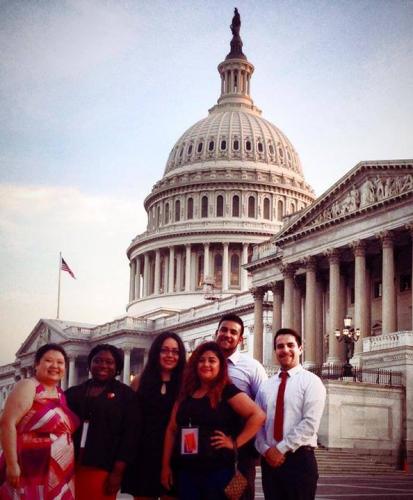 Nearly a year after the U.S. Senate passed a major overhaul of American immigration laws, the mood among reform activists from Minnesota and around the country has soured as they push the House to pass something — anything — before election season begins in earnest and puts lawmaking on hold.

A group of nearly a dozen Minnesotans joined activists from 17 states last week to meet with GOP lawmakers and demand action on immigration reform in some fashion, even if it’s not the major agreement the Senate passed last June 27.

But prospects are dim this session. That was the case even before last week’s primary defeat of House Majority Leader Eric Cantor, whose loss will likely make on-the-fence Republicans even more uneasy about passing anything party hardliners can hold against them, especially something as sweeping as immigration reform.

It’s a fact not lost on immigration advocates. Republicans’ responses to their lobbying, last week and all year, haven’t exactly heartened those who want immigration reform the most.

“Most of the GOP we talk to say the same thing: After passing the ACA, they don’t trust Democratic leadership,” said Emilia Avalos, 33, the director of advocacy and community at Navigate MN, an immigrant rights group. “They want a piecemeal approach because they don’t want to give room for agencies [to write rules for themselves]. Most are not for a path for citizenship.”

For many Americans, and especially more than 11 million undocumented immigrants, immigration reform is a deeply personal — and increasingly emotional — political issue. From the beginning, part of activists’ plan of attack has been to use their life stories to illustrate to lawmakers the impact reform would have on a growing segment of the population.

Last week was Cristel Selvan Morfin’s first time lobbying in Washington. Her family flew into the U.S. when she and her twin sister were infants, stricken by a case of asthma so bad doctors said they couldn’t survive in the Mexican climate. She grew up in Brooklyn Park, went to high school in Minneapolis and is studying nursing and obstetrics and gynecology at North Hennepin Community College.

Selvan Morfin, 19, also has a two-year-old daughter, “so I can relate a lot because I was two when I came to the U.S. and I just realize how important it is for her and I to stay together,” she said.

Political realities have kept their stories from sinking all the way in, even when advocates frame them in a pro-family, pro-children message they hoped would appeal to House Republicans.

Braulio Carrasco, a board member at Navigate MN and president of the League of Latino Educators, told the story of a third grader he taught in Minnesota. One night, immigration agents arrested his father at their home, and the next day, “he didn’t say anything to me, but you just saw that blank stare. He was gone.

“As far as reaching their academic success, it’s hard to even start having that conversation when our students are coming in emotionally traumatized,” Carrasco said.

Their disappointment isn’t reserved for just the GOP, though.

The Senate didn’t include everything activists wanted in its original bill, including lower funding levels for aggressive immigration enforcement along the U.S.-Mexico border. They’re also waiting for President Obama to take executive action reducing deportations for undocumented immigrants.

Obama issued an executive order in 2012 deferring deportation for young people brought into the U.S. illegally, but he has held off on expanding that order while waiting for Congress to act on a final reform package. Given congressional intransigence, Navigate MN co-founder Juve Meza said he wanted to see Obama do it earlier, and that national immigration advocates haven’t done enough to push him that way.

With time short and the odds long, Avalos said an executive order is the best case scenario at this point.

“In my personal, ideal world, we’ll have an executive order expanding deferred action so that will give us time to work on a better bill,” she said.

There are no indications lawmakers going to heed advocates’ concerns, especially in light of Cantor’s loss.

On the Hill, Republican House Speaker John Boehner brushed off the suggestion Cantor’s defeat dooms immigration reform, saying instead that any bill is dependent on Obama.

“The president is going to have to demonstrate that he can be trusted to implement a law the way it was passed,” he said at a press conference.

Cantor’s loss also appears to have done little to push Obama toward an immediate deportation executive action. At a fundraiser last week, he said he “fundamentally rejected” Cantor’s defeat as a conservative referendum on immigration reform, or as a death knell for Republican willingness to move forward on a bill this session.

“If you think that because of politics you want to maintain a status quo that’s broken, because of politics we’re going to forego the economic growth and the deficit reduction, and the border security, and the fairness and the opportunity that immigration reform represents — you don’t belong in Washington,” Obama said.

But Avalos said she’s grown tired of the delays coming out of Washington.