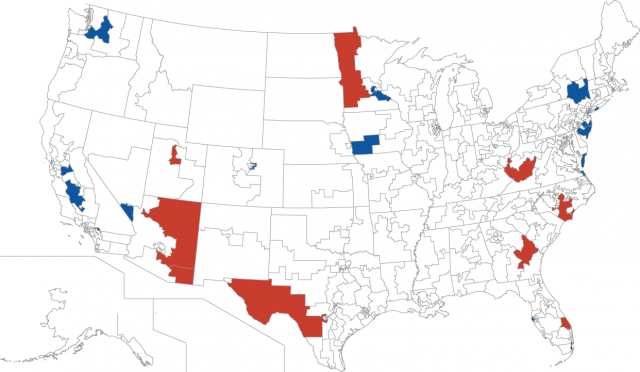 WASHINGTON — The Wall Street Journal made a trip to Detroit Lakes [subscription required] to talk to Democratic Rep. Collin Peterson in his home district, one of the last in the country to elect a U.S. House member from one party while voting for a presidential candidate from the opposing one.

The Journal said Peterson, a 12-term incumbent, faces “a new level scrutiny” this year from his often-friendly electorate thanks to a push from the national parties to target the few remaining House members in split districts like Minnesota’s 7th.

“The Republicans are going after me because there’s nobody else to go after,” Mr. Peterson said at the fundraiser. “I’m the bottom of the barrel.”

The GOP attacks on Mr. Peterson, mirroring ones launched against [Georgia Rep. John] Barrow, primarily focus on the Affordable Care Act. Though both Democrats voted against the health law in 2010, Republicans say the lawmakers could join them more often in their repeal efforts.

In West Virginia, Republicans say [Rep. Nick] Rahall’s party is behind an anticoal agenda, though Mr. Rahall himself is opposed to the administration’s new proposal to reduce carbon emissions.

It is a strategy aimed at tying conservative Democrats to a national party viewed with suspicion at home. … Democrats are employing a similar strategy against the 14 House Republicans they are targeting. A new paid online ad campaign from Democrats blasted House Republicans for stalling on immigration a year after the Senate passed bipartisan legislation.

This specific bit of strategizing is especially relevant for Minnesota, which has an outsized number of split House districts: In 2012, the 2nd, 3rd and 7th Districts all elected House members of one party while supporting the presidential candidate of the other. There are only 26 such districts left around the entire country, according to Polidata (down from 83 after the 2008 elections). As the list of competitive House seats has narrowed, some of these districts become natural targets for parties looking to capitalize wherever they can.