GRAND RAPIDS, Minn. — Stewart Mills is straight out of central casting for a would-be Republican congressman: A fresh-faced, straight-talking businessman who came to political prominence through a web video promoting second-amendment rights.

Ask him to dive a bit deeper into his policy positions and you’ll find a platform matching his image: on most everything from health care to tax policy, Mills is conservative and proud of it — making him a fine GOP foil to incumbent Democratic Rep. Rick Nolan in what’s expected to be a competitive 8th District race.

That said, Mills isn’t ready to follow the party’s lead on everything. Take one very conspicuous example: the budget plan presented by Rep. Paul Ryan, which Mills said last week that he wouldn’t support because of its approach on Medicare.

Lauded by conservatives, the Ryan plan repeals the Affordable Care Act while maintaining the law’s cuts to future Medicare spending and converting its benefits structure to a voucher system. The overall budget would save $5.1 trillion over ten years, and while cutting deficits and reining in the national debt are both goals of Mills, he said he doesn’t support the Medicare schemes Ryan had proposed.

Part of the Medicare savings in both the ACA and the Ryan budget are from planned cuts to Medicare Advantage, plans run by private insurers. Mills said he supports that program and wouldn’t want to move forward with those cuts.

“Nobody can honestly say that you’re going to have the same amount or more doctors offering the same number of services or more services by cutting payments to them,” the Fleet Farm executive and first-time candidate said during a lunchtime interview at a favorite Grand Rapids taco joint last Wednesday. “Ultimately, the seniors will be negatively affected, but at the same time, you have to tackle, through consumerism, the problems with the medical economy.”

Ryan’s chairmanship of the Budget Committee will end at the end of the year, so it’s possible the GOP may table the Medicare cuts in any future budget plan. Democrats have wielded votes for past iterations of Ryan’s budget against Republicans around election time, highlighting the Medicare cuts especially. Only 12 Republicans voted against this year’s budget bill.

Mills said he thinks bringing down health care costs is one of the best ways to tackle the national debt, and he suggested the first step should be repealing the ACA (more on that below). But he hasn’t proposed any potential fixes to Medicare itself, indicating that those would come after he’s elected to Congress.

Similarly, Mills demurred a number of times when asked how to reform Social Security, which, alongside Medicare, is one of the biggest drivers of the national debt long-term. He said “you have to get to Washington” and talk to both Republicans and Democrats before pitching a Social Security plan.

“If one side were to say something, even a little bit innocuous, you’d see a picture of grandma being driven off the cliff,” he said. “And all the other person was doing was advancing an idea to preserve Social Security. So it’s highly politicized.”

He’s less shy when talking about the Affordable Care Act.

Mills said the law has failed to live up to its promises of expanded access and lower costs and argued the law’s success at enrolling new beneficiaries is based too much on expanding Medicaid eligibility. He pitched a replacement plan filled with ideas long pushed by Republicans: offering health insurance across state lines, expanding health savings accounts, tort reform and more transparency in medical costs. He said he favors a “safety-net culture” based around programs like Minnesota’s MCHA high-risk pool program — which is closing because of the ACA’s pre-existing conditions requirement — rather than an approach like the ACA.

He said that the law’s relatively popular provisions — such as ending the ban on pre-existing conditions, allowing children on their parents’ plan until they’re 26, etc. — wouldn’t necessarily be a part of a future reform effort.

“I start with the fact that socialism doesn’t work,” he said. “Even if you have mechanisms that look like Obamacare, it still is government control of one-sixth of our economy, and consumerism does work. I believe that those two points are inarguable.”

Nolan, who has defended the law even as he pushes for a single-payer health care system, said he’s opposed to any efforts to repeal major provisions of the law, especially ones that he said he’s “seen firsthand how it’s benefited so many people.”

“There’s a lot of good things in there and I’m not remotely interested in repealing any of them, and it’s just unfolding now,” he said Thursday in Walker, Minnesota. “And as it unfolds, I think it will become apparent what’s working well and what needs fixing. But I have no interest in repealing that.” 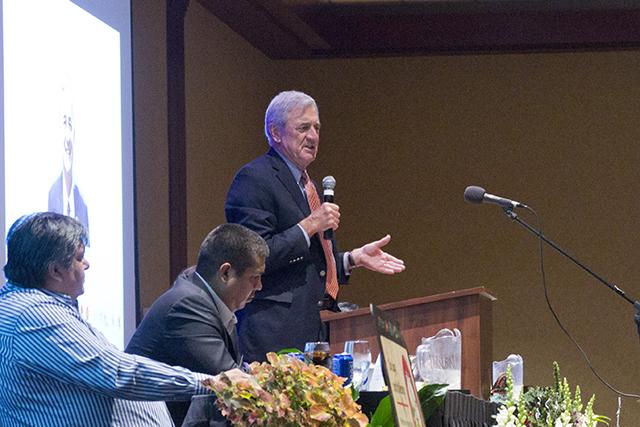 The two are similarly divided on business tax policy.

Mills said he favors a “flatter, fairer tax code” based on trimming out tax loopholes to help pay for lowering overall tax rates on “job creators,” small- and medium-sized businesses that file their taxes on the individual tax scale.

Democrats, including the House Majority PAC in a television ad campaign against Mills, have noted such a plan would inevitability mean lowering tax rates on individual high-income earners. But Mills said the point of the plan would be to help small businesses compete with corporations armed with accountants to help them navigate the tax code.

“Here’s the problem the Democrats have: they say they’re for jobs, but they’re constantly at war with job creators,” he said. “They’ve put a target on the backs of our Main Street businesspeople and their employees, and that’s very troubling.”

“The idea that somehow people of wealth are just unilaterally, across-the-board, the business and the job creators, it’s just bull crap,” he said. “I support tax cuts and deductions that require actual investment, not just a windfall benefit for the wealthy.”

Mills has already made hay with Nolan’s F grade from the National Rifle Association, pointing to Nolan’s support for an assault weapons ban and a limit on magazine capacities. Nolan, who is a hunter, said it amounts to “deceit and demagoguery” to suggest he doesn’t support second amendment rights.

The two are expected to wage a fight over mining as well, though both say they support the PolyMet copper-nickel mine currently under environmental review. But Mills said he expects to benefit politically from a potential divide among the 8th District’s miners and environmentalists who have traditionally teamed up to support Democrats.

“These people are willing to vote for a Republican if they’ll represent their interests,” he said, “because the Democrats have stopped representing the interests of the people here because we have what they call the blue-green divide” between labor-aligned Democrats and environmentalists.

The 8th District race is expected to be the most competitive in Minnesota this cycle, and both sides are girding for an onslaught of outside spending between now and Election Day. Despite sending Republican Chip Cravaack to Congress in 2010, the district continues to generally favor Democrats and Nolan won by a healthy margin in 2012. But Republicans have sought to weaken the DFL’s hold here, with Mills waging a strong challenge to Nolan and gubernatorial and U.S. Senate contests toping November’s ballot.

“The district is changing, the conservative voter intensity is picking up,” Mills said. “We have a great pitch to make to folks this election cycle, and it’s resonating.”