REDWOOD FALLS, Minn. — In his quest to unseat 12-term incumbent Democratic Rep. Collin Peterson, Republican state Sen. Torrey Westrom staked out a clear policy agenda during a debate at Farmfest on Wednesday: He wants to speed up the regulatory process. He supports more pipeline infrastructure to transport oil and free up delivery capacity on rail lines. He spoke about the need to inform urban-area lawmakers about the importance of farming during the twice-a-decade farm bill overhaul process.

His only problem is that Peterson agrees on all three points.

Indeed, on issues, Wednesday’s debate showed little difference between the Republican and Democratic candidates. So Westrom, a state Senator making his first challenge to Peterson, one of the last remaining moderate Democrats in the U.S. House, said afterward his strategy this fall will be to focus on other policy areas where Peterson might be weak in an otherwise Republican-leaning district.

And if there’s any agreement there — and there definitely is — he’s going to try linking Peterson with national Democrats like President Obama and Nancy Pelosi.

Peterson, 70, has been in Congress since 1991 and rose to the chairmanship of the House Agriculture Committee in 2007. He’s the ranking Democrat today and played an intimate role in drafting and passing a five-year, $500 billion farm bill earlier this year.

He plans to make sure voters remember that, too, devoting his entire minute-long closing statement at the forum to his role in the farm bill debate and on the traditionally bipartisan Agriculture Committee.

“I started in 29th place [in seniority],” he said “I remember that first day, looking up there and thinking, ‘I’m never going to get up to the top.’ But I hung in there and now, believe it or not, I’ve been the top Democrat on the Ag Committee for 10 years. … If everybody operated like the Ag Committee, we wouldn’t have the problems we have in this country.” 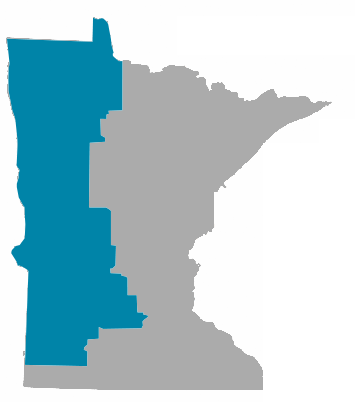 After the debate, Peterson said he’ll naturally plug his work on agriculture and farming issues when talking to voters in the 7th District.

“That’s what I do,” he said. “This is an ag district. That’s what they sent me to Washington to do, so what else are you going to talk about?”

There was little to distinguish Peterson and Westrom, 41, over the course of a forum packed with 9 other candidates from around Minnesota. Asked about the pair’s lack of  sparring during the debate, Peterson issued a simple reason for voters to choose him over Westrom.

“You go with the experience,” he said. “It’s his job to give people a reason to vote me out of office, and I don’t think there was a reason there today.”

It’s that experience gap — Peterson’s 24 years in Congress, his ranking membership on the House Agriculture Committee, his clout as its former chairman and his tendency to turn all of that into double-digit re-election wins — that Westrom must overcome in his first run for Congress.

He’s well aware of that fact, and ready to push an anti-incumbent tactic that Westrom hopes to pay dividends with Congress’s approval rating hovering around its record lows.

“We’re the challenger, I understand that,” Westrom said after the debate. “I’m David. He’s Goliath. I like the outcome of that story every time. Washington’s a mess. But 24 years is long enough. If you haven’t fixed it by then, I don’t know how long it will take.”

He also plans to move the conversation away from basic agricultural issues like the farm bill to areas where he could conceivably have more of a leg up with voters in the Republican-leaning 7th District. Westrom, for example, supports the Keystone pipeline. He wants to rein in Environmental Protection Agency regulations. He opposes the Affordable Care Act.

But there’s plenty of overlap between the two there, as well: Peterson has voted to approve Keystone, he’s often sided with Republicans against the EPA, and he voted against Obamacare in 2010 (Peterson has sided with Republicans on many of their anti-ACA bills since then, though Westrom notes he hasn’t supported full repeal bills),  Westrom indicated he’s going to try tying Peterson to the two biggest lightening-rods for the right’s ire: President Obama and Democratic House leader Nancy Pelosi.

“You can’t have it both ways,” Westrom said. “You can’t support that type of leadership and them come back here and say, ‘well, we’ll keep fighting for you.’ He’s been there 24 years, he’s been there long enough. It’s time for change if we’re going to shake up Washington.”

This idea of change — that Washington is broken and fresh blood is needed to fix it — is one Westrom returns to frequently. Peterson is liked well enough by his constituents to be returned to Washington by an average 32.1 percent margin of victory over the last five cycles, but the GOP expects the race to be closer this year than in the past.

Westrom is a highly-touted recruit for national Republicans, and groups on both sides have considered pumping big money into the district, something they haven’t done in years past. National prognosticators call Peterson a favorite, but with less of an edge than he’s had in the past.

Westrom said the make-up of this fall’s election works in his favor. It’s a midterm (which generally poses a threat to members of the president’s party), the ACA’s popularity is middling, and Obama’s approval ratings are suffering under thetraditional presidential six-year itch that could drag down Democrats this fall. And while Peterson can tout his role helping along the farm bill this year, Westrom posited that he won’t be able to promise future farm bill perks with the next reauthorization period no fewer than five years away.

“That policy isn’t in debate, and it’s not an issue he can tell people, ‘send me back to work on,’” he said.

Peterson said he’s not concerned about being caught up in any potential backlash against Congress or Democrats, even among voters for whom agriculture issues aren’t the most important.

“I don’t think most people see me as the problem,” Peterson said. “And we will remind them I’m not the problem.”