Emmer was quick and emphatic: McFadden should start. And when Emmer got his first chance to speak, he devoted much of his time to talking up McFadden’s credentials.

“There’s a big change that’s coming in this country on the federal level and on the state level,” Emmer said. “And frankly I’m excited to be running with a guy named Mike McFadden, because of his background, which is practical experience, because as that change comes, hopefully there will be more of us who offer solutions.”

Emmer's 6th District strength
The map below shows Emmer's share of the vote during the 2010 gubernatorial election, by precinct. Current district boundaries are overlaid in gray and the 6th District is highlighted in green. 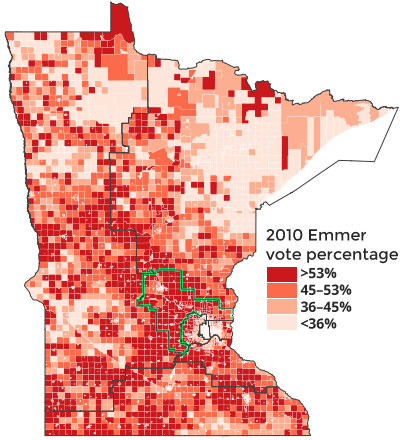 The 6th Congressional District was the district where Emmer won the most votes during his by-a-nose defeat in the 2010 gubernatorial race. Now he's the odds-on favorite to win his U.S. House race this fall, and Republicans are hoping to leverage his candidacy in the deeply red 6th to run up the score there and help other GOP candidates on the ballot, especially at the top of the ticket.

“I think he will be a congressman who will pay a lot of attention to the people of his district, and that approach to campaigning lends itself, obviously, to driving out the vote and getting people to turn out for his candidacy,” Minnesota GOP Chairman Keith Downey said.

Emmer adviser David FitzSimmons said the campaign has two goals: win his race against DFL candidate Joe Perske with a tally in the mid-50 percent range, and drive up GOP turnout so candidates like McFadden and gubernatorial challenger Jeff Johnson can match that result.

FitzSimmons compared that with 2008, the last time Minnesota had a competitive Senate race. U.S. Rep. Michele Bachmann, then a freshman facing a three-way race for re-election, pulled in only 46 percent of the vote in the 6th. Then-Sen. Norm Coleman did only a little better there, FitzSimmons said, winning about 48 percent against two opponents. He fell just 312 votes short of Al Franken statewide. A stronger Republican performance in the 6th would have made the difference in that race.

“Your statewide candidates have to get above 50 percent even in a three-way race, and have to get about even 55 [percent] in the 6th district to really pull it through,” he said.

The applicable political science theory here might be the idea of the coattail effect, that a favorite candidate at the top of a ticket — a presidential candidate, for example — can help boost candidates from the same party in other races. They’re “riding his coattails.”

It’s less often that a middle-ticket candidate like Emmer is able to do the same, University of Minnesota political science professor Kathryn Pearson said, since top-ticket races tend to mobilize voting blocs more than anything else. But GOP officials are banking on Emmer’s political organization, fundraising base and name ID leftover from his 2010 run to give him a similar impact in the 6th this fall.

That means everything from get-out-the-vote drives, many of which will be coordinated by the state party, to joint events like his August appearance with McFadden.

“Our campaign has been working closely with Tom Emmer’s team for the past few months,” McFadden spokesman Tom Erickson said in a statement. “Tom has an impressive grassroots organization and a top-flight political team. Democrats have all but given up on the 6th District race and we look forward to a strong finish from Tom and the entire GOP ticket in the most Republican district in the state.”

McFadden and Emmer talked to the St. Cloud Chamber of Commerce the day after the state primaries (there's some overlap between the two campaigns as well: FitzSimmons advised the McFadden campaign ahead of its endorsing convention win in May). Johnson hasn’t been with Emmer since an early endorsed candidate fly-around in June, a campaign official said, but there should be more coordinated campaign events this fall.

Emmer could help down-ballot Republicans, too, though that impact will be muted since Republicans hold most of legislative seats in the 6th District. The conservative Minnesota Jobs Coalition, though, has St. Cloud-area DFL Rep. Zachary Dorholt on its list of targets this fall.

FitzSimmons said Emmer’s approach isn’t going to be much different from what incumbents like Reps. John Kline and Erik Paulsen do for Republican candidates in their districts. But those districts are — Kline and Paulsen themselves aside — only marginally Republican-leaning, and “district-wise, there isn’t quite as much juice that they can squeeze out like you have in the 6th,” FitzSimmons said.

In some ways, Emmer is setting himself up as a congressman-in-waiting. In June, for instance, he established a personal political action committee called a leadership PAC, a common vehicle for congressional incumbents to raise money and spread it around to likeminded candidates.

Emmer’s PAC, the Viking PAC, hasn't raised much money yet and has only made two donations, including a $2,300 check to 8th District candidate Stewart Mills, according to the Center for Responsive Politics. But just by opening a leadership PAC, Emmer is beginning to do what a member of Congress is expected to do once he takes office.

Some of his strength in the 6th, though, may dampen any sort of Emmer-driven voter mobilization effort there, Pearson said. Competitive races tend to drive turnout, and for now, Emmer’s simply isn’t.

“Emmer can’t make the case to voters, ‘please come out and vote for me’ because his race is so close,” Pearson said.

But he can do so for McFadden and Johnson if they stump together, she said, and Downey predicted GOP voters will be otherwise enthused to turn out and vote against Gov. Mark Dayton or Sen. Al Franken in November.

“I think between the Republican interest in getting rid of one-party rule in St. Paul and reversing the Obama-Franken agenda in D.C., we’ll have a base motivated and ready to turn out,” he said.