It’s now a near consensus among political handicappers: odds are, Republicans will win control of the United States Senate after this year’s elections, picking up at least the 6 seats they need for a bare majority. It would be their first majority since early 2007, and it will come during the last two years of a presidency, in Barack Obama’s, against which they’ve long fought.

Mike McFadden, the Republican running against Democratic Sen. Al Franken, has offered a bit of political analysis about the future of the Senate throughout the campaign. If he’s elected, he says, it means Republicans have won enough Senate seats around the country to take a fairly sizable majority in the Senate (He’s probably right: while Republicans are expected to win the Senate, Franken is still favored to win his race, meaning a McFadden victory could signify a bigger Republican wave than many people were expecting).

If that’s the case, or if the GOP takes the Senate at all, how would it operate, politically? What policies would GOP senators pursue, and how would they work with congressional Republicans and President Obama? And for that matter, what happens Democrats beat the odds and manage to somehow retain control?

Franken and McFadden weighed in.

What if Republicans win?

McFadden predicted economic issues would be front-and-center for a Republican-controlled Senate, and he said that could manifest itself in energy policy.

Even if Republicans have a very good election, they won’t get to a filibuster-proof 60 votes, let alone the 67 votes needed to override a veto, meaning their overall legislative output will be severely curtailed. But McFadden said Republicans could partner with some red-state Democrats to push through energy items like the Keystone XL pipeline or natural gas permitting reform. He has made energy policy a key component of his economic platform, and congressional Republicans have pushed the pipeline so vigorously that it might be a top priority for them next session as well.

“[Majority Leader] Harry Reid has run the Senate in a way that very few things have gotten to the floor,” he said. “There are a number of Democratic senators who are just as frustrated as Republicans as to just how locked-down the Senate has been.”

Health care votes, in some fashion, are likely — the House has famously taken more than 50 votes to repeal all or parts of the Affordable Care Act — though McFadden said he wants a Republican replacement plan in place before a repeal bill comes to the floor. Even so, a repeal, in full or in part, is certain to meet resistance from the White House if Republicans somehow succeed in passing it through Congress, and McFadden seems to realize that.

“We might be staring at each other,” he said of Congress and the White House. “I would hope that we could move forward.”

As to relations between Obama and a Republican Congress, McFadden previewed what could well be a standard Republican refrain after Election Day.

“The president is going to have to make a decision as to what his legacy is,” he said. “Does he want to work with a Republican Congress to improve the lives of Americans, or does he want to be a bottleneck for two years?”

If Democrats hold the Senate

If Democrats manage to defy expectations and hold the Senate — albeit with a razor-thin margin — Franken said he expects their priorities will be the same as they have been over the past few years: economic issues, immigration reform and perhaps the almost mythical promises of tax and education reform.

Like McFadden, Franken said economic issues will be priority one for Democrats next session. Franken said his focus would be on the middle class, and he’d push policies he worked on in his first term, like expanding job training programs. 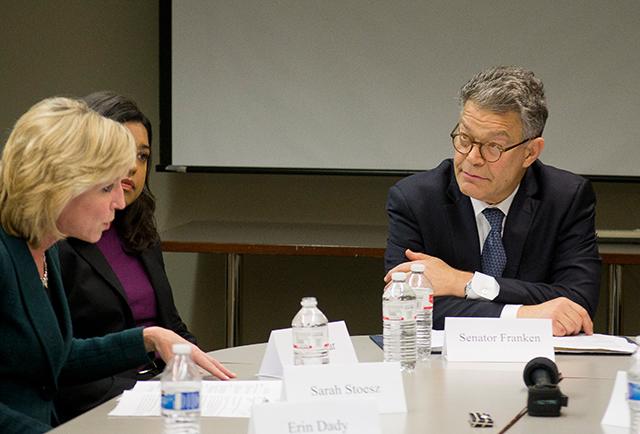 An immigration reform package was one of the few major bills to pass the Senate but die in the House this session. Franken said he hopes Republicans would be willing to consider immigration reform in either this year’s lame duck session or in the next Congress to avoid charges of being anti-Hispanic ahead of the 2016 presidential race.

“We got the AFL-CIO and the Chamber of Commerce. We got the farm workers and the Farm Bureau,” he said. “We have dairy farmers in Minnesota who want this very badly, the Dreamers in Minnesota, who I meet, want this extremely badly, and their parents do. That’s something we need to do, we should be able to do. I actually think it’s in everybody’s interest.”

Franken, as a member of the Health and Education committee, has seen No Child Left Behind reform languish during his tenure in the Senate; he said he wants to take another crack at that, with a focus on early childhood funding, testing reform and principal recruitment. He said he wants to play a role writing a potential tax reform package as well, something that never got off the ground in the either the Senate or House last session, despite bipartisan calls to get it done.

“I think every senator would like a hand in that and not just hand that over to the Finance Committee,” Franken said. “This is something that ultimately, we need to do.”

Franken is pragmatic about the effectiveness of the next Senate, noting that no matter who wins the majority, their margin will likely be thin enough that it won’t lead to some seismic shift in how the chamber operates.

As it is, the majority party needs to secure 60 votes to pass most measures beyond a threatened filibuster from the minority. That fact won’t change unless the new majority leader decides to change the filibuster rules, as Democrats did last year for some presidential nominees (McFadden said it would be in “poor form” for a Republican majority to do something similar).

Franken and McFadden agreed that a Senate with a majority closer to 50 than 60 might actually foster bipartisanship, since members will actually, literally, have to work across the aisle to get things done.

“I think it might be more conducive [for bipartisanship] only in the sense that partnerships would mean more,” Franken said. “As it is, when you need 60 to do something, it still is a reason for partnerships, but I think maybe even more so.”

Congress-watchers are less convinced that’s the case, and take a dim view of the productivity of a GOP-controlled Senate.

“Just looking ahead realistically, it’s going to be hard to do that on bigger picture issues,” said Norm Ornstein, a scholar with the American Enterprise Institute.

Ornstein said he expects a Republican Senate could move on some trade bills and maybe an infrastructure bill, but legislatively, because of the magic 60-vote barrier, it wouldn’t be too different from what the Democratic Senate has been able to do over the last few years.

That’s the same conclusion the National Review’s Ramesh Ponnuru came to in a Wednesday column. He writes that, bluntly, “[Republicans] won’t be able to pass much legislation in the first place.”

The Atlantic’s Molly Ball sees two scenarios: either a continuation of the gridlocked Senate we have now, or one in which new Majority Leader Mitch McConnell would try to push GOP proposals through the chamber, forcing Obama to veto them. The Washington Post says the majority would be a “nightmare” for Republicans, politically, because they won’t be able to satisfy their base.

McFadden takes a rosier view of potential Senate productively. He offered up an optimistic prediction for both next week’s elections and the 114th Congress:

“I think we will be elected with a mandate to get this economy back on track,” McFadden said. “Keep in mind, there’s a scenario where you have 14, 13, 12 new Republican senators coming into the chamber in January. Just knowing the individuals, we’re going to get things done.”

What if McFadden wins and Republicans take the Senate?