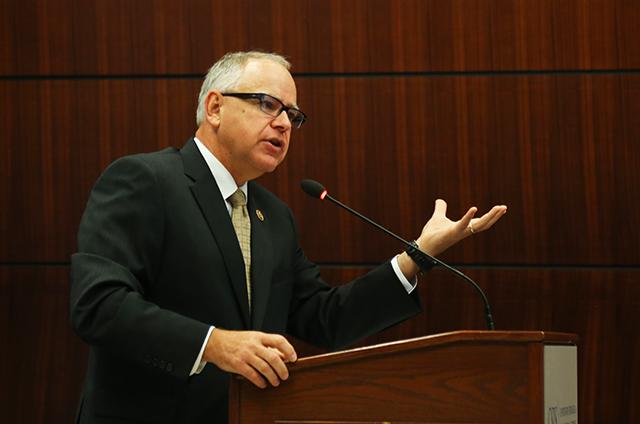 CC/Flickr/CSIS
Rep. Tim Walz delivers a keynote address before a panel discussion on the future of the U.S. Army National Guard hosted by the Center for Strategic & International Studies in May.

WASHINGTON — Just minutes after a short huddle with Nancy Pelosi on the House floor last week Rep. Tim Walz said he felt “abused” by the way he lost his underdog bid to lead Democrats on the Veterans Affairs committee.

But any ill will toward leadership appears fleeting, as Walz looks for more responsibility and more policy influence on military and veterans affairs. To that end, he has come back to Democratic leadership seeking both another term on the VA committee and a new spot on the House Armed Services Committee, even if that assignment would force him to drop off — and lose all-important seniority — on one of the two committees he’s served on since he joined Congress in 2007.

For Walz, the chance to have voice in shaping military policy is worth the trade-off. A veteran of the National Guard and the highest-ranking enlisted solider elected to Congress, he said his experience in uniform and subsequent involvement in Congress qualifies him for an expanded workload on military and veterans issues. Walz co-chairs the National Guard and Reserves Caucus, runs leadership outreach roundtables for veterans service organizations, and he’s won plaudits from armed services and veterans affairs groups for his work on the VA panel, especially for focusing on mental health care issues.

Now he wants a larger platform for some big political battles on the horizon.

Walz called military and veterans affairs a “natural fit” for his office. “And to be honest,” he said, “it’s one of the few areas where things are moving, where we’re starting to see successes.”

Walz has taken these maneuverings seriously. Consider the political capital he’s willing to risk to gain his preferred positions: he challenged Democratic leadership during his run at the VA ranking membership, and he would give up eight years’ worth of seniority on either the Agriculture or Transportation Committee to get a seat on Armed Services.

Agriculture and Transportation align with the needs of Walz’s district — the 1st, encompassing southeastern Minnesota — and he said he has long hoped to carve out a legislative niche relevant to his constituents. Walz also serves on the Veterans Affairs committee through a waiver granted by leadership (members are generally limited to only two committee assignments, and Walz claims to be the only member with three). During this year’s Veterans Administration scandal, Walz found himself explaining the committee’s work to people, and those conversations helped clarify his focus on military and veterans affairs.

“It was very interesting to watch how people reacted and said, ‘what do you want? What do you want?’ And I said, ‘Well, I want to serve veterans,’ ” he said. “I never prepared a long-term vision other than where I could be most effective, and I think that panned out.”

During an interview, Walz made a couple of references to the Republican chairman of the VA committee, Rep. Jeff Miller (R-Fla.), who serves on both VA and Armed Services. In some ways, he may be trying to emulate Miller’s approach: Walz said there’s so much overlap in jurisdiction between those two committees that membership on both allows lawmakers to tackle veterans issues on two fronts.

Both committees will have a lot on their plates during the next Congress. Lawmakers continue to grapple with sequestration cuts that Walz says have pitted active duty personnel against reservists, and he wants to be a spokesman for the National Guard in funding discussions.

On the Armed Services front, the American response to the Islamic State terrorist group remains a critical question for a lot of lawmakers, evidenced by Republican Sen. Rand Paul’s call that Congress formally declare war on the group (Walz said he doesn’t necessarily want to do that, but “I certainly do agree” with the idea that Congress should play more of a role in the conflict).

“I think our role would be to re-establish Congress’s responsibility, and I would say supremacy, especially when it comes to the war fighting,” he said.

Of course, these are issues every member of Congress needs to confront, but a seat on the committee that deals with them would give Walz significantly more clout. Lawmakers are set to receive committee assignments sometime after Congress’s Thanksgiving recess, and Walz said he’d be willing to leave the Transportation panel — which is tasked with writing infrastructure bills, a goal long marred by fights over funding mechanisms — if it meant a spot on Armed Services.

Gus Hargett, a retired major general and the president of the National Guard Association of the United States, said he’s known Walz through the Guard and through mutual friends, and the two talk regularly about Guard issues. He said Walz’s workload has been growing over time.

“I’ve been here five years, and I have seen him become more and more involved with issues as they relate to the military and veterans,” Hargett said “I’ve seen him take more of an increasing role every year.”

Walz has partnered with groups like the Iraq and Afghanistan Veterans of America to push legislation on things like veterans suicide prevention, a bill moving through Congress right now. IAVA endorsed his ranking membership bid, and its legislative director, Alex Nicholson, said Walz did a “really noble job” of balancing the need for oversight with his political allegiances during the VA scandal.

“By being aggressive, by making clear that he will be VA’s best friend and worst critic if he has to be, that played a significant role in keeping those charges of hyper partisanship away from that committee,” he said.

Minnesota Rep. Collin Peterson — the ranking member of the Agriculture panel — said Walz consulted with him as he ran for the VA leadership post, and said he had warned Walz that bucking the seniority system could hurt him with some members of the Democratic caucus.

But Peterson was backing his candidacy anyway, and not only because he thinks Walz is qualified: he said it would be good politics to put someone like Walz — a rural Democrat — in a leadership position on a high-profile committee like VA.

“Politically, it would be very good for us to have him a position like that, for us in rural America,” he said. “If we’re ever going to win back seats in rural America, it’s going to be because we have people like Tim Walz in these positions.”

But while Walz is clearly looking to expand his legislative workload, he isn’t necessarily jumping at the chance to do the same on the political end. He brushed off early speculation he could make a gubernatorial run in 2018, and isn’t committed to repeating the role he played in Democrats’ 2014 strategy next cycle.

Walz ran the Democratic Congressional Campaign Committee’s Frontline Program this year, designed to provide strategic advice to 26 Democrats in swing or Republican-leaning districts around the country. At least 14 of them won re-election. Walz said it’s hard to be too happy with that result (“It’s kind of the equivalent as a football coach of saying, we just got beat 48-7 and I’m praising the punting game”) and he said he would “have to give it a lot of thought” if offered the job again.

“These were personal friends who my staff and I helped work, and they ran spectacular campaigns in a very challenging environment, and I like that part of it,” he said. “I’m not particularly enamored with the deep politics that go with it. Every foray I get into that, much like this VA position, I walk away saying there’s a better way to do this.”

After eight years in Congress, Walz finds a voice on veterans and military issues