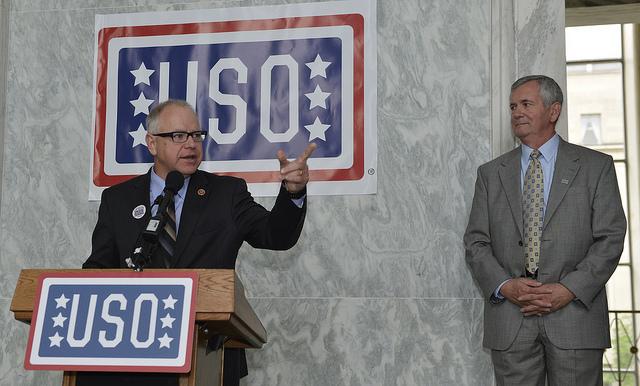 CC/Flickr/The USO
Rep. Tim Walz speaking at a USO event in May of this year. 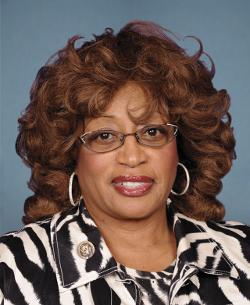 Walz was challenging Florida Rep. Corrine Brown to be the ranking Democrat on the committee, but he faced an uphill fight. Democrats often default to seniority when determining committee leadership, and Brown is the longest serving member on the committee. Democratic leadership, including Nancy Pelosi and her top lieutenant, Steny Hoyer, were backing Brown’s bid, as was the powerful Congressional Black Caucus, which wanted to maintain the seniority system.

But Walz was able to secure endorsements from major veterans groups, including the Iraq and Afghanistan Veterans of America and the National Guard Association of the United States. On Tuesday night, the committee’s outgoing ranking member, Maine Rep. Michael Michaud, bucked leadership and endorsed Walz, who said Wednesday that he felt he had the momentum in the contest.

What happened next is a lesson in parliamentary procedure and a fair amount of inside baseball.

That committee had planned to consider the VA committee spot after the House’s Thanksgiving break, but decided last night to move up their vote on the post to Wednesday morning.

Walz could’ve circumvented the committee’s decision on leadership positions if he collected signatures from his fellow members, which would have sent the ranking membership spot to the full Democratic caucus for a vote. Walz said he was confident he could collect enough signatures and that he had the votes within the caucus to secure the position.

There was just one problem: under Democratic rules, only permanent committee members are eligible to serve as ranking members, and Steering and Policy determined that Walz isn’t a full-time member. That’s because he serves on the committee only by virtue of a leadership-given waiver: Walz already serves on two other committees — Transportation and Agriculture — so he needs leadership’s approval to serve on a third.

The ruling on his full-time status put an end to Walz’s leadership bid, and he conceded Wednesday that Brown had won the position.

“I certainly feel a little bit abused, but it doesn’t change the focus on this,” Walz said. “My focus from the beginning has been what’s best for veterans.”

Walz announced his intention to pursue the VA committee job after the Nov. 4 elections, and he has emphasized his military experience as complementary to his committee tenure. Walz, a retired command sergeant major in the Army National Guard, is the highest-ranking enlisted soldier ever to serve in Congress, and he said that should count for something on the Veterans Affairs Committee.

“The thing that’s ironic about this, especially as a military person, seniority matters, it does matter to me, and as the leader said, it’s one serious consideration,” Walz said. “I made the argument on this that, had I come in 2004 rather than 2006, would I have had more seniority? The reason I didn’t come in 2004: I was deployed. So the argument is, as a veteran, do you lose seniority when you’re gone?”

Democrats’ committee selection process has been rife with controversy this month. First, leadership refused to grant a vote-by-proxy to an Illinois member who is at home, pregnant. Then, Pelosi waded into the ranking membership fight for the Energy and Commerce Committee by endorsing a less-senior member for the post. The Steering and Policy Committee backed her choice, Rep. Anna Eshoo, but the caucus as a whole selected the more senior Rep. Frank Pallone for the position.

Through all that, the VA committee dust-up took a bit of a back seat until its conclusion on Wednesday. After House votes, Walz, surrounded by a gaggle of press, didn’t criticize Pelosi, but said the Democrats have “arcane” rules set up for determining committee leadership.

“I don’t know why you’d have to talk to a lawyer about putting yourself up for a vote on the VA, but that’s what it amounted to to try and get an interpretation of the rules on how you do that,” he said. “I do respect that there is a need for a rule, and I do respect parliamentary procedure, it’s what separates us from anarchy, and that’s fine. But they really should, again, as the party that wants access to voting and things, we should probably make it as easy as possible. It shouldn’t be a challenge to get a vote on whether people want me to be the ranking member or Ms. Brown.”

Walz gets a waiver for next session

Walz huddled with Pelosi and Hoyer on the House floor during votes on Wednesday making his case that, despite the leadership controversy, he should keep his waiver to serve on the panel.

In a statement, a Pelosi spokesman said, “Congressman Walz has accepted the Leader’s offer to serve on the Veterans’ Committee in the 114th Congress and to chair the quarterly [Veterans Service Organizations] roundtables that the Leader has organized and held regularly since 2006.”

“I think I have way too much to offer, way too much support, to not get back on there,” Walz said. He added later, “I think what’s good about this is the intention to be a positive, contributing member to veterans on that. I think I’ve still got some options when we come back.”

With that, Walz left the Capitol on his way back to a VA committee hearing, where a veterans health care bill he has introduced was on the agenda.