Sen. Al Franken said Monday that he “welcomes” President Obama’s call that the government maintain open Internet standards under “net neutrality” even if means dramatically overhauling how the Internet is treated by regulators.

Obama suggested regulators could continue to enforce traditional net neutrality by reclassifying the Internet as a public utility, like telephone service, which would open it up to much more stringent regulation than it currently receives. Such a plan has been controversial — the Internet isn’t currently considered a utility, and Internet providers have opposed more regulation — but lawmakers like Franken, one of Congress’ most outspoken net neutrality supporters, have long backed it. 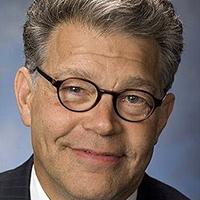 “What the president is asking the FCC to do — to reclassify Internet service as a utility — is simply common sense, and it would ensure that rich corporations couldn’t pay for an Internet fast lane,” Franken said in a statement. “Net neutrality is a simple concept: all content on the Internet must travel at the same speed. It’s been the architecture of the Internet since it was created. It’s made the Internet a platform for enormous innovation and economic growth. And it should stay that way. I hope the FCC agrees.”

Obama said the FCC should pass several other net neutrality protections, including banning a “fast lane” to deliver content more quickly for companies that pay for it. He also called for similar regulations for cellular carriers.

Obama’s comments don’t act as a formal policy shift for the government since only the FCC can set the regulations (unless Congress directs the FCC to regulate in a certain way, something that is highly unlikely). More than 3.9 million people submitted comments to the FCC on net neutrality over the summer, and regulators could soon rule on how they plan to address it going forward.