VIRGINIA, Minn. — U.S. Rep. Rick Nolan is here in the heart of the Iron Range, speaking to the United Steelworkers Local 1938, a decidedly pro-Nolan crowd, and he’s going to spend 40 minutes preaching to this choir about everything under the sun.

Whether it’s his family’s mining history (he had relatives work on the Cuyuna Range), or his support for the PolyMet copper-nickel mine project, Nolan has a policy to promote or an anecdote to tell that could bring this room of union men and women to applause.

“I’ve got a bill to require that these pipelines use United States steel, not just processed here, but mined here in this country,” he said. “It’s important for jobs and economic development in this country. And I’ll tell you something else: it’s safer, because it’s a higher quality steel.”

Two days later, Nolan is 150 miles away, in the Twin Cities exurb of North Branch at a DFL field office. He’s here to talk about the minimum wage and economic inequality, and he hits a few of the same notes he did in Virginia earlier in the week. But the mining dissertation is out; he doesn’t mention taconite or steel once. Instead, Nolan gives a Bible lesson, about the moral need for a minimum wage.

“A big part of the God that most of us embrace is about equity, it’s about fairness, it’s about giving something back [from] those for whom much has been given,” he said. “There’s a real, fundamental, basic biblical notion.”

Nolan’s underlying message and his tone are the same, even if his words are different — and his audience, more so. So it goes in Minnesota’s 8th District, maybe Minnesota’s most politically and economically diverse congressional district, where candidates have to tailor their campaign strategy to different constituencies a hundred or more miles apart at any given time.

Just ask Nolan and his Republican challenger, Stewart Mills, a political rookie who has spent the better part of a year crisscrossing this district, putting it back in play for the GOP on Tuesday. Both Nolan and Mills have natural, built-in bases in the district; their goals now are to drive turnout in their best areas and persuade what persuadable voters remain before Tuesday.

Minnesota’s 8th District’s 27,900 square miles stretch from the Canadian border to the northern fringe of the Twin Cities exurbs, and from Lake Superior west to nearly Bemidji. It has miles of agricultural land, the Iron Range, a timber industry, a tourism industry, seven Indian reservations and a major shipping port in a minor metropolis. 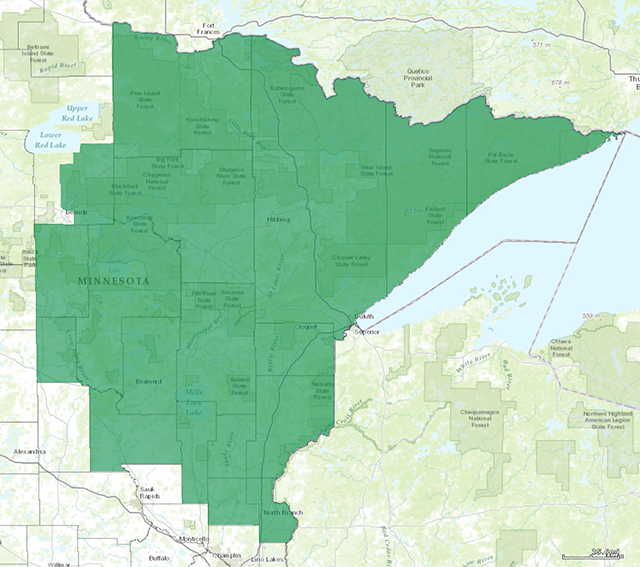 For years, politically, it was dominated by the DFL, until slowly the district boundaries crept south, incorporating more conservative territory, while the firmly Democratic Iron Range shrunk and began losing political clout. The DFL’s advantage remains, but it’s weakened, especially in mid-term elections. In 2010, after 63 years in Democrats’ hands, voters gave the district’s U.S. House seat to a Republican.

“We had been working hard on it, and in 2010, that was our big turnover right there,” 8th District GOP Chair Ted Lovedahl said.

Democrats blame that turnabout on a couple factors, from complacency on incumbent Jim Oberstar’s part to low DFL turnout coupled with an already good Republican year. Nolan won the seat back, by 9 percentage points, in 2012, a presidential year, but Republicans landed a top recruit in Mills and the district has become one of the country’s true congressional battlegrounds again this year.

Mills bounds to the front of a conference room to talk to a small audience, members of the National Federation of Independent Business. Mills, the heir to the Fleet Farm retail chain, is NFIB and Chamber of Commerce-endorsed, and like Nolan among the steelworkers in Virginia, these are his people. 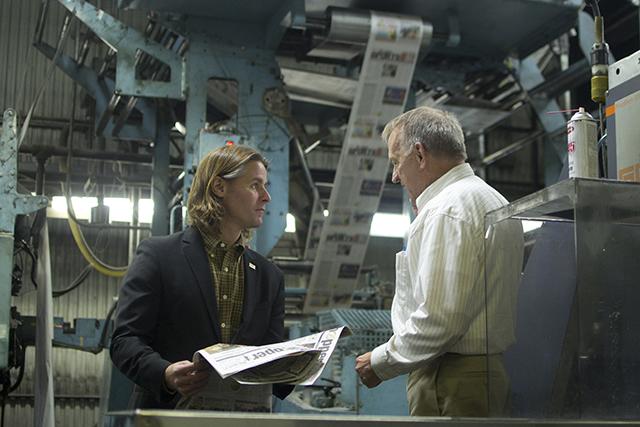 “Rick Nolan has demonstrated that he will abuse our vote in Washington D.C.,” he said. “We’ve given him our vote. He has gone to Washington D.C. and he’s voted against us, time and again.”

Mills is so deep into the 8th that he’s nearly left it — his roundtable in Princeton is right on the district’s southern border. Republican Rep. Chip Cravaack won this county, Mille Lacs, by 1.4 percentage points in 2012; Mitt Romney won it by 8.6 percentage points.

History shows, and both sides say, Republicans will do well in the southern and western reaches of the district, from bright red counties like Chisago and Isanti northwesterly through Hubbard and Cass Counties. These areas are, in ways, more like the conservative 6th District: many residents work in, and commute to, the Twin Cities, or are farmers. Voters tend to be more socially conservative than their neighbors up north. Census data shows them to be the district’s fast growing counties, as well. 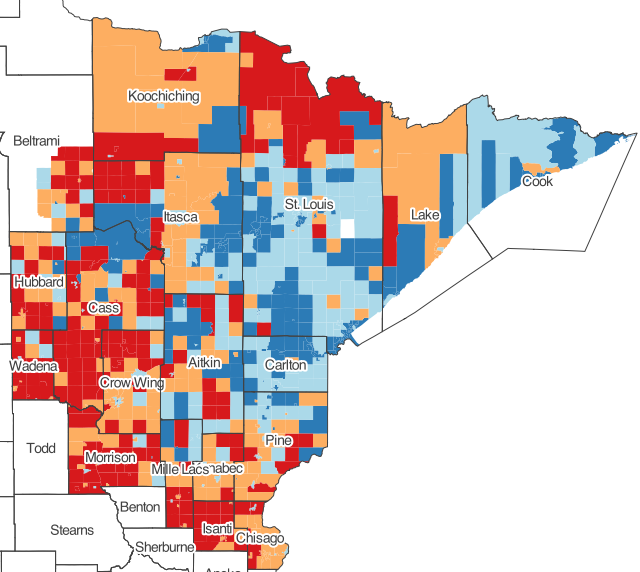 And while these areas form a growing base for the GOP, it only makes a difference on election day if they vote. To that end, Republicans have been trying to match Democrats’ ground game by growing one of their own this cycle. Mills has opened four victory offices throughout the district — Hermantown, Grand Rapids, North Branch and Baxter — and the campaign said they have “hundreds” of volunteers working on get out the vote activities, from phone calls and mailers to rallies, like Friday’s with Greg Walden, the chairman of the National Republican Congressional Committee.

Mills told his Princeton audience he was “competing with the couch” on Election Day.

One area to watch: Crow Wing County. The county’s rural areas are conservative, but neither side knows how Brainerd proper will vote this year. It’s friendly toward Democrats, but home to both Nolan and Mills, and the Republican’s campaign gets free advertising on the southern side of town where a series of highway signs announces the city as headquarters for Fleet Farm.

The Iron Range, a series of towns and industry stretching from mid-Itasca to mid-Saint Louis County, has become the front line for politicians’ fights in the 8th District this cycle, up and down the ticket. It’s long been a Democratic stronghold made up of blue-collar, labor-friendly, socially moderate DFL voters. But this year, Minnesota’s GOP gubernatorial and U.S. Senate challengers have tried to leverage what they consider to be tepid support for new mining projects on their opponents’ behalf into votes.

That dynamic is less intense in a congressional race where both Nolan and Mills support the PolyMet copper-nickel mine in Hoyt Lakes. Even so, Republicans say Mills has made in-roads on the Range and expect him to break through there this year.

“The Range is starting to go Republican a little more all the time,” Lovedahl said. “We’ve been gradually turning, but with a candidate like Stewart, he’s moving the Range over to us.”

Democrats say they don’t see it. Nolan has shored up his support on the range through union and local politician endorsements, and brought in Vice President Joe Biden earlier this month to rally the troops. Democrats say Nolan’s support for mining — while still a contentious point among partisans — should firewall him more on the Range than other Democrats on the ballot.

Democrats turn to their machine

Democrats note that while the district’s southern end is red, Republicans lack a base of dense support like they have in Duluth.

As of last week, Nolan was focusing his turnout efforts on two groups: still-persuadable likely voters, and those who would be likely to vote for him but at risk of not voting at all. Duluth is key to that — Minnesota’s fifth largest city is a Democratic stronghold, giving Oberstar 61 percent of its votes in 2010 and Nolan 67 percent two years later.

Part of Oberstar’s problem, though, was a big dip in Duluth turnout — Nolan won 33,000 votes there in 2012, a presidential year, to Oberstar’s 20,300 two years earlier. Oberstar lost the 2010 election by 4,400 votes. Democrats are banking on an expanded Nolan ground game this year: the campaign says it has 1,100 volunteers signed up, and it’s aiming to knock on 35,000 doors and make 50,000 phone calls before Election Day.

Nolan’s camp is heartened by two other factors: Democrats’ top-of-the-ticket strength and early voting indicators. Gov. Mark Dayton and Sen. Al Franken have consistently led polling in their races, and Nolan could stand to benefit from any potential Democratic wins at the top of the ticket.

The state’s expanded early voting program means more than 125,000 Minnesotans have already voted this year, according to Secretary of State data. An outsized chunk of those voters — up to 30,000, according to the Nolan campaign — are from the 8th District. Whether that’s an indicator of better-than-expected voter enthusiasm is still to be seen, but knowing who cast ballots early allows the campaign to focus on those voters waiting for election day.

“Our effort has been heavily to encourage turnout throughout the district,” 8th District DFL chairman Don Bye said. “That was a factor [in 2010], complacency there, and there’s not going to be complacency this year. Nolan has an all-out effort for getting the vote out.”

In politically and economically diverse 8th District, Nolan and Mills search for votes