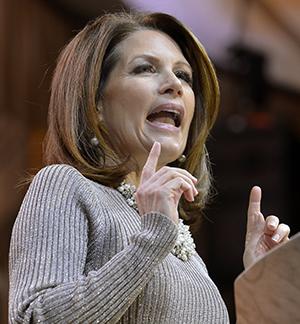 But what’s next for her? When the House adjourns this month — possibly as early as next week — what does Bachmann do next?

That’s been one of the biggest questions in Minnesota politics since she announced her retirement last year. In an October Washington Post profile, she said she wants a role similar to that of former House Speaker Newt Gringrich, who has done work for conservative think tanks while also writing and speaking about conservative ideals (along with a heavy rotation on cable news shows).

When she talked to me either this week for Friday’s immigration story, she gave a broader overview of what she’s thinking:

“I want to go out and, in my next life, continue to speak out across the country, especially to young people, speak across the country and write, and be affiliated with groups, and weigh in on 2016. I occupy a very unique space: I’m the only woman that has ever participated in presidential debates on TV on the Republican side,” she said. “Most likely there will be a female on the Democrat ticket as the nominee, and what I want to do is let people know, my party is the party of women, and we are the party of choice. You want a choice party? You want a party that reflects your values and is all about entrepreneurism? This is us, this is who we are. I want to occupy a part of that space in the next two years. It’s a very consequential election, and I want to be a part of that.”

Bachmann didn’t say if she had any formal plans firmed up yet. Fundamentally, though, she wants to be a voice for Republicans heading into the 2016 elections. She foresees an election in which disillusioned Democrats line up behind a Republican presidential nominee, much in the way she personally did after working for Jimmy Carter’s presidential campaign in 1976.

“I was very proud to be a Democrat. And then I saw the bumbling, stumbling of the policies of the Carter administration, and as a young person, I realized, I don’t want any part of this nonsense,” she said. “I became a Republican and I didn’t look back, and the policies of Ronald Reagan did a lot better for me, personally.”

She envisions the same thing happening at the end of the Obama era, if only Republicans can package their message effectively.

“We had a very effective communicator in Ronald Reagan, and I think that will be the challenge for the Republican Party, to effectively communicate an alternative to the stumbling, bumbling disaster that have been the heavy bureaucratic answers that have come out of this administration, and that’s a challenge I want to be a part of.”